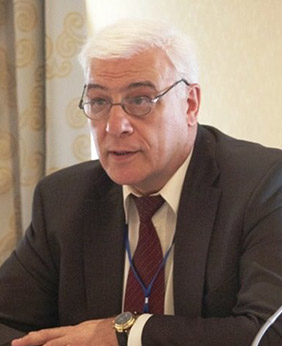 Lieutenant-General (Retired), Ph.D. Military Sciences. In the Armed Services since 1968. Graduated from the Military Institute of Foreign Languages, M.V. Frunze Military academy. 1976-1992 – served in different positions in the General Staff of the USSR and Russian Federation. From 1992 to 2002 – served in positions of: Senior Officer, Deputy Head of Direction, Head of Direction, Deputy Head of Department, Head of the International Treaties Department of  the Russian Ministry of Defense. Promoted to the rank of Major-General in 2000, to the rank of Lt.-General – in 2003. In 2002 he was appointed on the position of Head of the International Treaties Department – Deputy Head of the Main Directorate of International Military Cooperation of the Russian Federation Ministry of Defense. Retired from active duty in 2009. In 2009-2017 – PIR Center Consultant, then Senior vice-president. PIR Center’s Chairman of the Executive Board since 2014. From 2016 – Associate professor and Head of Center for Applied Political-Military Research of School of World Politics, M.V.Lomonosov Moscow State University.  Deputy CEO of “Vega Radio Engineering Corporation” from  2009 to 2018. Vice-President of Russian International Affairs Council (RIAC).  Expertise: arms control, political and military aspects of international security, non-proliferation of weapons of mass destruction, military use of the outer space, Russia-NATO, Russia-U.S., Russia-China relations. 10/20