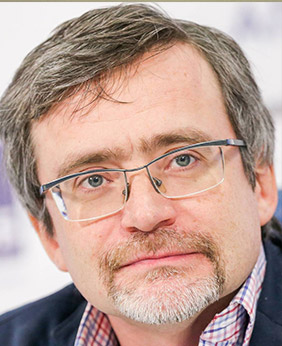 Russian sociologist and political scientist, Candidate of Political Sciences and HSE Professor. He started his career in 1991 as an employee of the Institute of Mass Political Movements of the Russian-American University. In 1993, he moved to the Center for Political Conjuncture of Russia and worked his way up from researcher to CEO.In September 2003, he headed the leading research center of the country – the All-Russian Center for the Study of Public Opinion (VTsIOM). He is also a member of the Board of Directors and heads the Scientific Council of VTSIOM. He is the editor-in-chief of the journal “Monitoring. Social and economic changes”. Since 2012 – Advisor to the First Deputy Head of the Presidential Administration of the Russian Federation. He conducts active scientific and teaching activities, heads the basic departments of VTSIOM in the leading universities of the country – MGIMO, HSE, RSUH. Scientific Director of the Department of Sociology of the Financial University under the Government of the Russian Federation. He was awarded the Order of Honor, the Order of Friendship, the Medal of the Order “For Services to the Fatherland” of the II degree, the Certificate of Honor of the President of the Russian Federation, the Gratitude of the President of the Russian Federation. He is the author of numerous scientific publications and books. Member of the Advisory Board of the PIR Center since 2011. 10/22