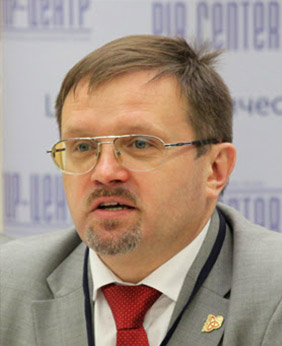 In 1990, he graduated from MGIMO University. He worked in the Foreign Ministry of the USSR/Russia, in the Moscow News newspaper. In 2000-2002, he studied Management in the Military-Technical Cooperation course at the Russian Foreign Trade Academy.  Since 1994 he is a Research Fellow at the PIR Center. Head of the Center for Global Studies & International Organizations of the Institute for Contemporary International Studies of the Diplomatic Academy of the Ministry of Foreign Affairs of the Russian Federation. He is a Member of the Expert Council on the International Humanitarian Law of the State Duma of the Russian Federation, participant of the International Panel on the Regulation of Autonomous Weapons Systems (IPRAW), participant of the Russian-American Dartmouth dialogue. He has more than 300 publications on international security issues. His research interests include military artificial intelligence, new weapons systems, arms control, Russia’s military-technical cooperation with foreign states, strategic stability, Russia-US and Russia-NATO relations, Central Asia and Afghanistan, and illicit arms trade. 09/20