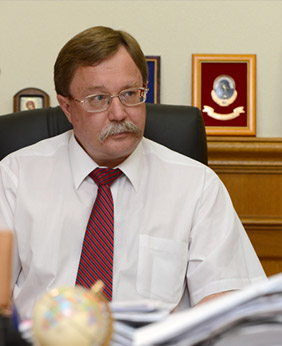 Location:
Pretoria, South Africa
Affiliation:
Ministry of Foreign Affairs of the Russian Federation
Position:
Ambassador Extraordinary and Plenipotentiary to the Republic of South Africa and Kingdom of Lesotho

In 1984 graduated from the Moscow State Institute of International Relations. Mr. Rogachev has extensive experience in leading positions in the Ministry’s central office and abroad. In 2001 -2004 he served as Deputy Director of the Department of New Challenges and Threats Issues. From 2004 untill 2009 Mr. Rogachev served as the Deputy Permanent Representative of the Russian Federation to the United Nations at the UN Headquarters in New-York. PIR Center Advisory Board member since 2011.