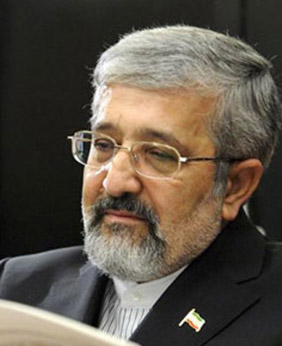 Ambassador Extraordinary and Plenipotentiary. Within the last 30 years has been involved as a nuclear physicist and senior diplomat, in the capacity of special envoy, delegate, chief negotiator, and invited speaker, in numerous international events on disarmament and international security. 1980-1990 — Director, Nuclear Research Centre to the Atomic Energy Organization of Islamic Republic of Iran (AEOI). During this period, was also Resident Representative of Iran to the IAEA. 1990-1996 — director of both Education and Manpower Mobilization Department of the AEOI and the Nuclear Engineering Department of the Organization. 1996-1999 — Advisor to the Foreign Minister of the Islamic Republic and Secretary of the National Authority of the Chemical Weapons Convention. 1999-2002 — Ambassador and Deputy Permanent Representative of Iran to the UN and other international organizations in Geneva. A Chief Negotiator for the Additional Protocol to the Biological Weapons Convention. After the end of his mandate became Deputy Director-General for International Political Affairs in the Ministry of Foreign Affairs of Iran. At the same time — Member of the negotiating team in the talks between Iran and the group EU3 on the Iranian Nuclear Program. 2006-2013 — Ambassador Extraordinary and Plenipotentiary of Iran to the IAEA and Permanent Representative to the UN and other international organizations in Vienna, including OPEC and OPEC Fund. During this assignment was a President of the UNIDO Board; Vice President of several annual sessions of the General Conference of IAEA; Chairman of the Asian Group in the UN in Vienna etc. Currently — Advisor to the Vice President of the Islamic Republic of Iran and Head of the Iranian Atomic Energy Organization H. E. Ali Akbar Salehi; Associate Professor in Nuclear Physics, Disarmament and International Security at the Faculties of Science and International Relations in various universities respectively. Published several papers on the topics related with the nuclear energy, nuclear arms control and nonproliferation. PIR Center Advisory Board member since 2015.