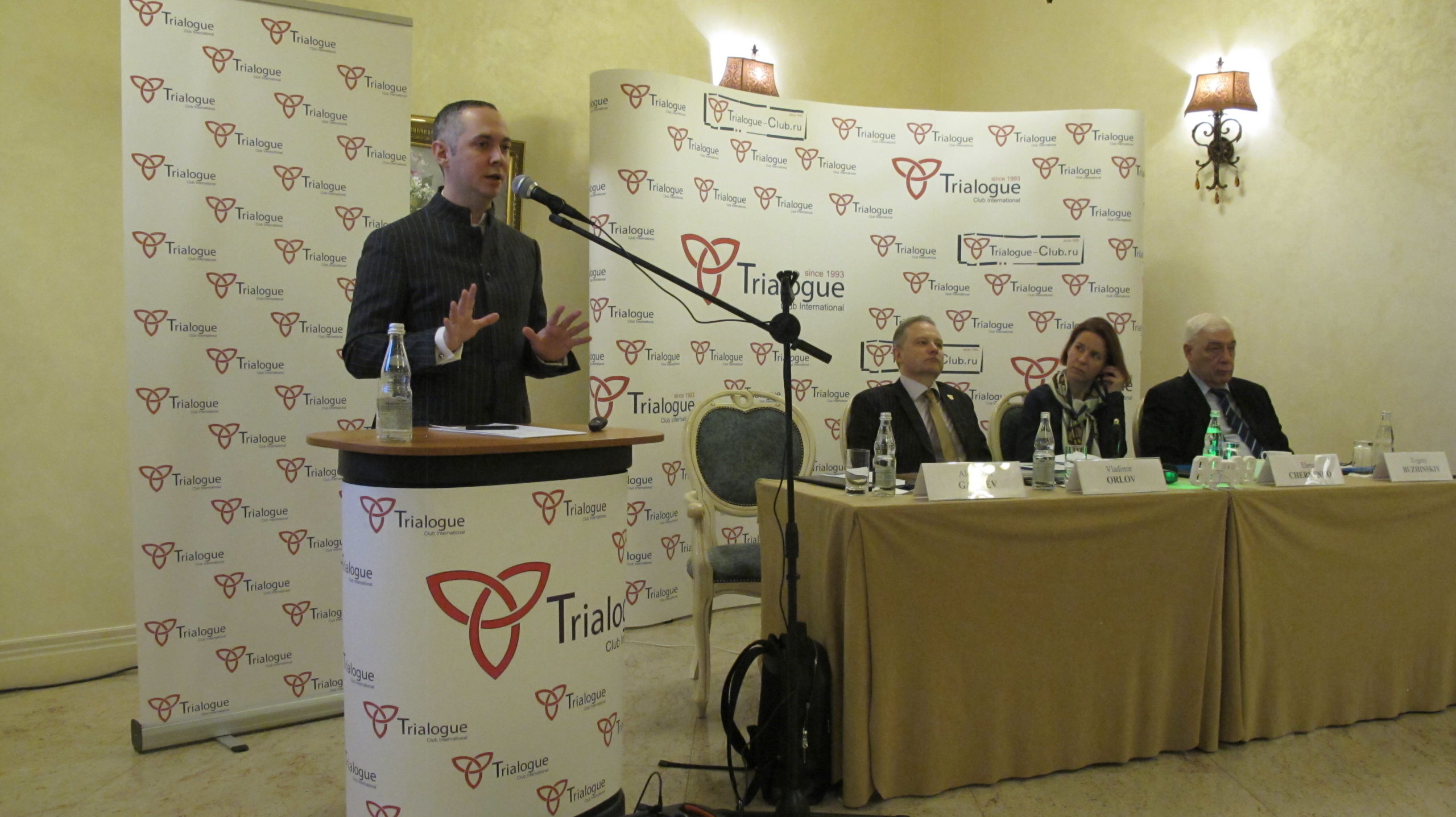 MOSCOW, APRIL 16, 2021. PIR PRESS. «The Russian leadership believes that the U.S.-Chinese confrontation is structural, and this rivalry will be the defining factor of the global dynamics in decades to come. The Kremlin views this rivalry predominantly through the lens of realpolitik, the ideological dimension (competition between liberalism and authoritarianism) is considered as a narrative envelope for the great power competition. Moscow is aware that the global system will become increasingly polarized, with great powers and less powerful states gravitating closer to either Beijing or Washington», – Alexander Gabuev, Member of PIR Center Advisory Board, Senior Fellow and Chair of Russia in the Asia-Pacific Program, Carnegie Moscow Center.

On April 7, the 109th Spring Session of the Trialogue Club International took place. It was dedicated to the topic “Asymmetric Triangle: Deepening of the U.S.-Chinese Confrontation and its Implications for Russia”. After a long break due to the pandemic in-person, face-to-face format of the event was finally restarted. The Session was attended by representatives of foreign diplomatic missions, international organizations, and leading experts in the sphere of global security.

Vladimir Orlov, President and Founder of the Trialogue Club International, Director of PIR Center, addressed the participants with an opening statement. As he noted: “We are holding the 109th meeting of the Trialogue Club International in person. Technology has certainly helped us get through 2020 and not lose each other in isolation. However, we entered 2021 with the hope of having communication traditionally based on personal contacts. On dialogues. On trialogues. Our Club serves as an appropriate platform for this. It allows us to discuss topical, burning issues that require our careful consideration. One of such topics, according to the Club members, is the problem of the Russian-Chinese and Chinese-American relations, the issue of a new, or rather, a well-overlooked old strategic triangle”. Under the tradition, the event was moderated by the Co-chairs of the Club, namely Lieutenant-General (Retired), Ph.D. Military Sciences Evgeny Buzhinsky and Ph.D. in History Elena Chernenko.

Alexander Gabuev, Member of PIR Center Advisory Board, Senior Fellow and Chair of Russia in the Asia-Pacific Program, Carnegie Moscow Center, was a keynote speaker of the Session. He provided his expert assessment of the geopolitical rivalry between China and the United States, and also conducted a thorough analysis of the Russian-Chinese relations dynamics. The content structure and accuracy of the speaker’s speech provided members of the Club and special guests of the Club’s President with the high-quality food for thought. The expert’s speech was followed up by a traditional Q&A session, and both current members of the Trialogue Club International and special guests of the Club’s President, for example, representatives of Finland, the Republic of the Philippines, the Republic of Singapore, the Regional delegation for the Russian Federation, Belarus and Moldova, were involved in a vibrant discussion of the topic. Traditionally all meetings of the Trialogue Club International are held under the Chatham House rule so there is no opportunity to disclose the views and assessments of the speakers and all the participants. The meeting materials are available to the Club’s members on our website with the use of a special password for members only.

Thus, the Trialogue Club International, founded in 1993, began its 28th season with a long-awaited in-person meeting, of course, in compliance with the necessary epidemiological standards.

If you need any further information about the Trialogue Club International, fees, terms, and conditions of membership, please contact the Club’s Executive Secretary Elena Karnaukhova by phone: +7 (916) 170 03 07 or email: secretary@trialogue-club.ru.