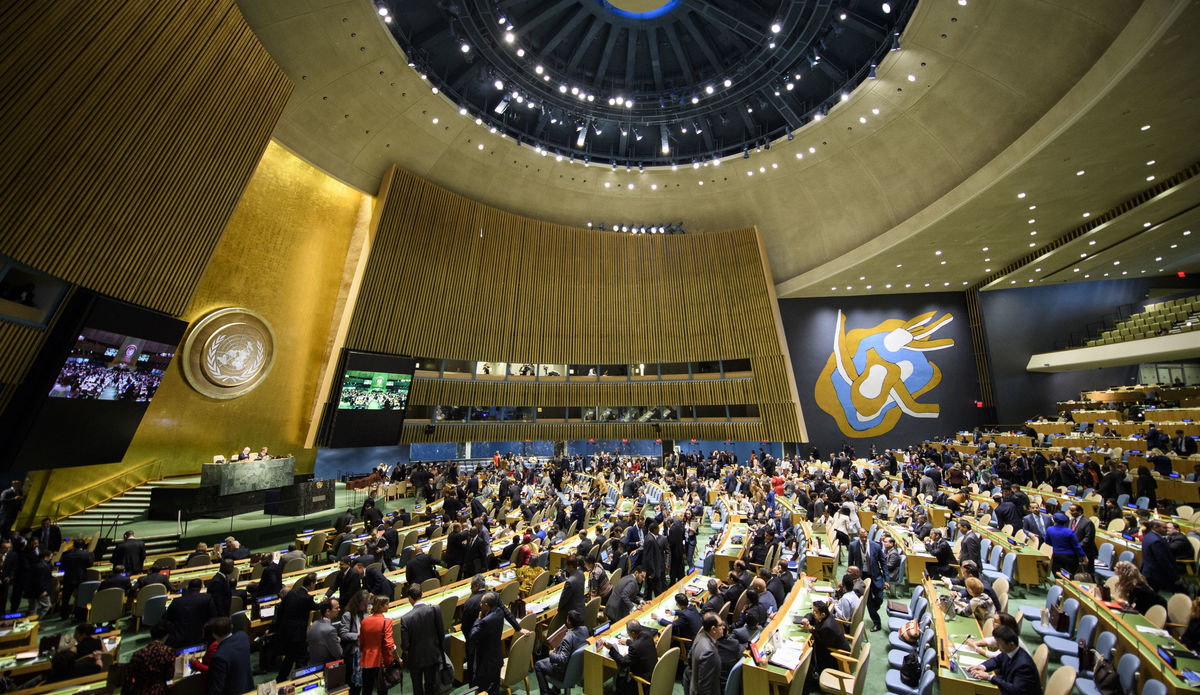 Main PIR Press News 5th of March was Proclaimed as the International Day for Disarmament and Non-Pproliferation Awareness by the UN General Assembly Resolution
Status: Open

MOSCOW. DECEMBER 10. PIR PRESS. «The General Assembly, recalling that the promotion of peace and security is among the main purposes and principles of the United Nations, and acknowledging the related importance of education as a tool for peace, security, disarmament and nonproliferation, decides to proclaim 5 March as the International Day for Disarmament and Non-Proliferation Awareness», – from resolution 77/51 adopted by the UN General Assembly (2022).

On December 7, 2022, the UN General Assembly adopted resolution 77/51, which proclaimed 5th of March as the International Day for Disarmament and Non-Proliferation Awareness.

The 20th anniversary of the UN Secretary-General Report United Nations Study on Disarmament and Non-Proliferation Education was marked in 2022. Earlier in one of the PIR Posts (in Russian), we have already talked about the importance of promoting disarmament and nuclear nonproliferation education. In the context of an aggravation of the international situation, education and awareness-raising in this area are of particular relevance, especially in conditions of numerous speculations on the nuclear factor in international relations.

Kyrgyzstan previously took this initiative. It was presented by the Minister of Foreign Affairs of the Kyrgyz Republic Ruslan Kazakbaev in September 2021, when the 76th session of the UN General Assembly and the XII Conference on Facilitating the Entry into Force of the CTBT were held. Thus, he called to deepen cooperation in the field of disarmament and nonproliferation education.

This initiative was developed in accordance with a set of recommendations set out in the United Nations Study on Disarmament and Non-Proliferation Education (2002), anniversary of which is being celebrated this year. It also became a logical continuation of the existing resolutions adopted by the UN General Assembly in the field of disarmament and nonproliferation education. In particular, it is worth mentioning the UN General Assembly resolution 55/33E (2000), as it was the first time when this issue was incorporated into the UN agenda.

It is expected that the annual celebration of the International Day for Disarmament and Non-Proliferation Awareness on 5th of March and conducting appropriate information and awareness-raising activities will contribute to the dissemination of objective knowledge on nuclear issues, which in turn will have a positive impact on the nuclear nonproliferation regime.

In the 1990-2000s, research schools on nonproliferation and disarmament issues have been established in some cities and regions of Russia. Among them, for example, St. Petersburg State University (SPbU) in St. Petersburg, Ural Federal University (UrFU) in Yekaterinburg, Novosibirsk State Technical University (NSTU) in Novosibirsk and National Research Tomsk State University (TSU) in Tomsk. It was interesting to know the opinion of our colleagues from partner universities about the UN Kyrgyzstan initiative.

“Despite the fact that the topic of disarmament and nonproliferation education has been discussed in the official discourse since the adoption of the resolution 55/33E in 2000, the UN Kyrgyzstan initiative is an important practice of implementation of the new disarmament norms. The submission by Kyrgyzstan the agenda, in keeping with the spirit of the nuclear nonproliferation regime, demonstrates its relevance. The establishment of the International Day for Disarmament and Non-Proliferation Awareness is yet another attempt to remind us of the importance of human rights, the humanitarian dimension and disarmament. Moreover, we see that Kyrgyzstan is positioning itself as a State promoting nuclear disarmament issues. For us, the Russian Federation, whose educational projects are mainly dominated by arms control issues, this initiative may become a kind of signal of the need to promote new approaches, as well as to explore another range of problems,” – shares her opinion Dr. Ekaterina Mikhaylenko, Associate Professor at the Department of Theory and History of International Relations of Ural Federal University, Head of the Ural Nonproliferation Group.

Dr. Anastasia Malygina, Associate Professor at the Department of Theory and History of International Relations of St. Petersburg State University, Director of the Cross-disciplinary Centre for Global Biosecurity Studies, also commented the Kyrgyzstan initiative: “The initiative to proclaim 5th of March as the International Day for Disarmament and Non-Proliferation Awareness is an important step in the implementation of the objectives outlined in the UN Sustainable Development Goals, as well as the new Agenda for Disarmament Securing our Common Future presented by the UN Secretary-General in 2018. Russia has accumulated a solid experience in teaching disarmament and nonproliferation issues. Unique teaching teams have been formed in Moscow, St. Petersburg, Yekaterinburg. For example, at St. Petersburg State University, the curriculum is not limited to nuclear issues, but is aimed at a comprehensive study of WMD nonproliferation and conventional arms limitation problems. The convergence of sciences and digitalization increases the risks of switching various technologies from peaceful to weapons purposes. It is important to develop an interdisciplinary approach to disarmament and nonproliferation education, as well as to expand partnerships between Russian universities. The implementation of the resolution adopted by the UN General Assembly on December 7, 2022, could contribute to the establishment of an appropriate international platform for interaction between all interested parties, which could, among other things, promote international cooperation in terms of the exchange of experiences, professional development of teachers, and improvement of teaching methods”.

It should be noted that on December 7, 2022, the UN General Assembly also adopted a resolution 77/42 No First Placement of Weapons in Outer Space (122 States were in favor, 50 States were against, and 4 States abstained). “The Russian and Chinese initiative to adopt the UN General Assembly resolution Prevention of an Arms Race in Outer Space: No First Placement of Weapons in Outer Space of December 7, 2022, can be interpreted in two ways, with both interpretations related to the ongoing armed conflict between Russia and Ukraine and repeated statements by Russian officials on the State’s right to use nuclear weapons in case of a threat to Russia`s independence. On the one hand, the adoption of this resolution reflects the growing tension around the world and the fear of the escalation of armed conflict to the global level with the actual use of nuclear weapons. It is in this context that the initiative of Kyrgyzstan, which has decided to institutionalize disarmament and nuclear nonproliferation education, can be considered. On the other hand, in December the UN General Assembly adopted resolutions that the Russian side assesses as anti-Russian, and the initiative of the People’s Republic of China and the Russian Federation can be considered as an attempt to present their agenda and their vision of global problems and approaches to their solution,” – notes Dr. Larisa Deriglazova, Professor at the Department of World Politics of National Research Tomsk State University, Head of the Jean Monnet Centre for European Studies (CEES), Russian International Affairs Council Expert.

PIR Center, as a specialized Russian NGO, has been carrying out nuclear nonproliferation, disarmament and global security education and training since 1994. Over the 28 years of active work, we have been able to form a broad international community of specialists in the field of International Relations – PIR Alumni Community. Its most impressive element is more than 800 graduates of the key PIR Center Education & Training Program`s projects: the International School on Global Security, training and lecture courses, Internship Program, the International Dual Degree M.A. Program Global Security, Nuclear Policy, and WMD Nonproliferation (MGIMO-MIIS-PIR Center), the International Timerbaev Nuclear Debates, etc. Read about the largest and most significant events in the life of PIR Center in 2022 in our Information Bulletin PIRogue (in Russian).

PIR Center pays special attention to the formation of a new generation of professionals in nuclear nonproliferation issues. Therefore, along with expert events, great importance is attached to the annual holding of the International Timerbaev Nuclear Debates, in which young experts discuss key issues of global security. This platform was created in order to unlock the potential of students and help them to develop a critical approach to understanding of the existing problems.

Currently five Debates have already held on the following topics: the security of the world without nuclear weapons, the Treaty on the Prohibition of Nuclear Weapons, the nuclear ambitions of Japan, South Korea, Iran and Saudi Arabia, and the impact of new technologies on the strategic stability and the future of arms control. The VI International Timerbaev Nuclear Debates is scheduled for March 2023. Detailed information will be announced later.

Questions about participation in the PIR Center’s educational projects can be directed to the Education & Training Program at edu@pircenter.org.