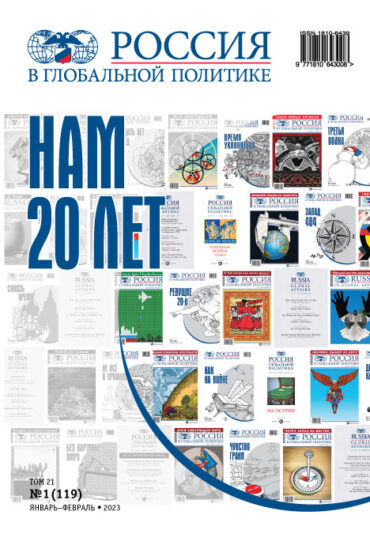 MOSCOW. JANUARY 2. PIR PRESS. «We are twenty years old. The restless steppe mare of «Russia in Global Affairs» has been flying and crushing the feather grass that gets under its hooves for two decades now. Magazine number one was published in January 2003. For a long time? Recently? I don’t even know… Time was compressed and deformed so much that the eyewitnesses and participants got confused in the sensations. For those who stood at the origins, it seems that we just started just now. From the outside, this is already a time, an epoch», – Fedor Lukyanov, Editor-in-Chief of «Russia in Global Affairs» Journal, Chairman of the Presidium of the Council on Foreign and Defense Policy of Russia, Director of Research at the Valdai International Discussion Club, Research Professor at the National Research University «Higher School of Economics».

In January 2023, the anniversary issue of «Russia in Global Affairs» Journal was published. Among the authors of the issue are representatives of the PIR Center: MGIMO Professor, PIR Center Founder and Director Dr. Vladimir Orlov, and Research Fellow of Nuclear Nonproliferation and Russia Program Sergey Semenov.

In the article written by V.A. Orlov and S.D. Semenov, «The Post-American World and Nuclear Non-Proliferation: Twenty Years Without the Right to Make a Mistake», the authors present the most extreme scenarios for the evolution of the situation in the field of nuclear non-proliferation, which could result in the emergence of new nuclear states on the world’s political map.

It is emphasized that the balance of benefits and obligations laid down in the framework of the NPT regime still meets the interests of the absolute majority of the world’s states. At the same time, the authors point out the idea that a number of states and territories (Japan, the Republic of Korea, Taiwan, Ukraine, Turkey, Egypt, Saudi Arabia, the Republic of Brazil, and the Islamic Republic of Iran) may be interested in maintaining uncertainty about their nuclear ambitions and use this factor to strengthen their own geopolitical position.

The article was prepared as part of the Global Security, Strategic Stability, and Arms Control Project. The project is being implemented jointly with MGIMO University as part of the Strategic Academic Leadership Program «Priority 2030».

The authors are grateful to A. V. Fedorov (member of the PIR Center Expert Council), L.S. Okuneva (Head of the Department of History and Politics of European and American Countries, MGIMO University), Y.V. Kryachkina (Senior Expert at the Russian Institute for Strategic Studies), and A.R. Margoev (Research Fellow at the Analytical Center of the Institute of International Studies, MGIMO University).

Special thanks for valuable advice to S. V. Ponamarev, Associate Professor of the Engineering Academy of RUDN University.

The issue of «Russia in Global Affairs» can be found here.