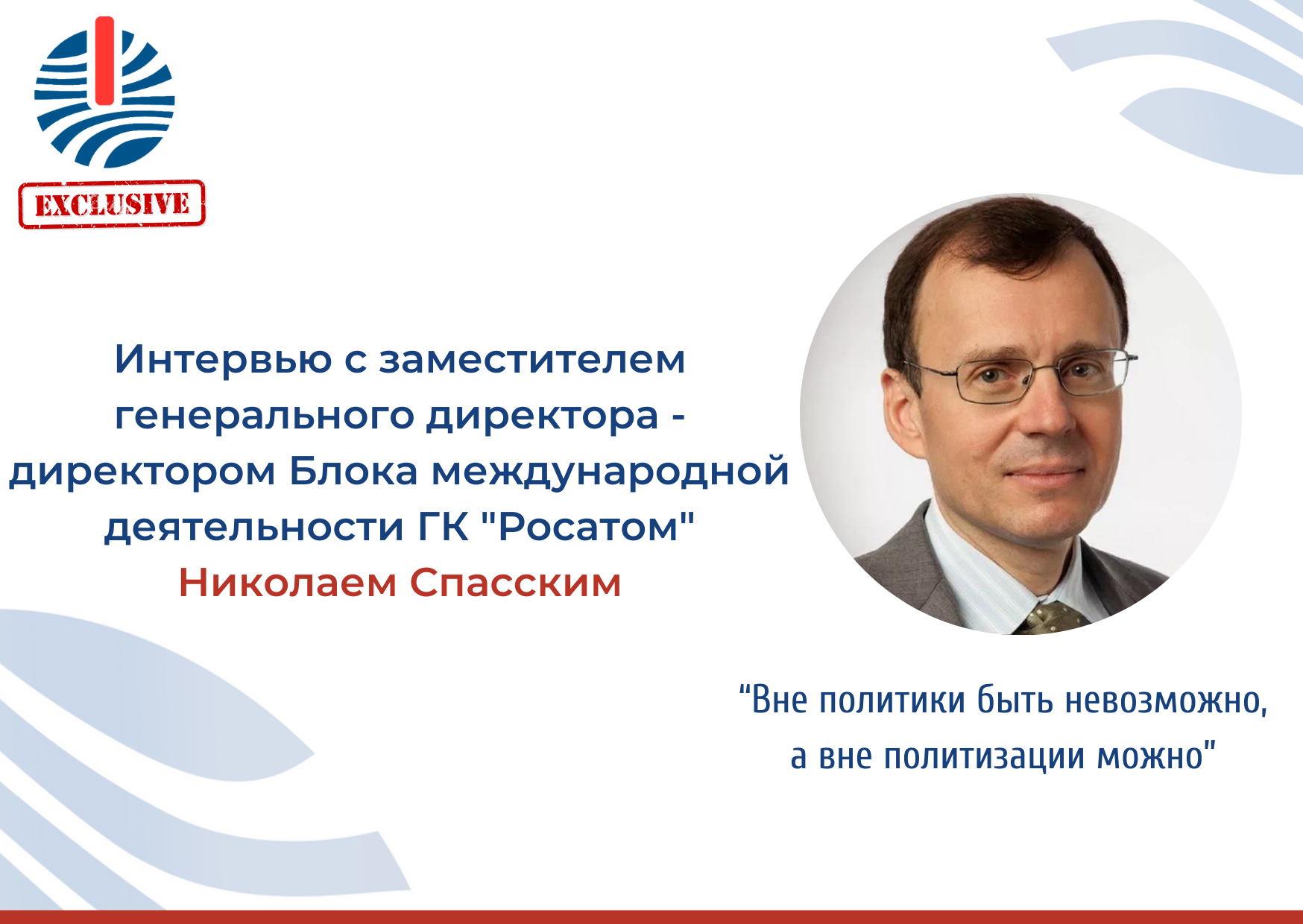 PIR Center conducted an interview with Nikolay Spassky, Deputy General Director-Director of the International Activities Unit of the state Corporation Rosatom. We discussed aspects of Russian-Iranian cooperation in the framework of the JCPOA negotiations, as well as the prospects and priorities of Russian international nuclear cooperation with other countries. The interview took place on March 11, that is, at the time of the 8th round of negotiations on the JCPOA in Vienna.

Within the framework of the 8th round of negotiations in Vienna on the JCPOA, the American side announced that they did not intend to provide legal proof that they would not hinder Russian-Iranian economic cooperation. In this situation, how do you assess the future of Russian-Iranian cooperation in the nuclear industry?

This is a very good question, which, unfortunately, will not be fully answered now, primarily because negotiations are ongoing. Now is the most crucial stage. We can expect that, after all, a comprehensive package agreement will take place soon, although the chances are not one hundred percent. This is the first. Secondly, I’m sorry, but there is such a reality of life when you don’t know something, and you know something, but you can’t tell, and this is completely normal, because the stakes are too high, and negotiations are very delicate. First, the text (in the main body of the agreement) contains very decent wording. In the part about which you just spoke about our cooperation with Iran, the wording is very decent, but so far insufficient, requiring tweaking. Our diplomacy is currently engaged in this, first, our Permanent Representative to the IAEA and other international organizations in Vienna, Mikhail Ulyanov. A very big, very serious, very creative diplomat. I really hope that he will succeed. That is, I repeat, we are talking about twisting these provisions.

Now on. Our cooperation with Iran is not developing out of the blue. We have completed the first unit of the Bushehr NPP in the most difficult conditions, under sanctions pressure. Why I say it is the only case in the world, because there was abandoned German equipment lying there since the Iran-Iraq war. The Persian Gulf, I’ve been there, among other things, is a terrible climatic environment with a high level of humidity. The air is saturated with salt, the wild sun. That is, you can imagine that the equipment there, though in boxes, has been lying, in fact, for several decades. We took it, integrated it into a modern project, built it, let it go. By the way, good German KWU equipment. But, nevertheless, from an engineering point of view, there were no drawings — this is unprecedented.

There is this unit, which needs to be supplied with fuel, which needs to be operated. There are two new blocks that we are already building. That is, answering the encoded part of your question will be easier in some ways, harder in some ways. It is easier, because sanctions pressure will be lifted from Iran, it is harder, because if, under the conditions of sanctions, calling things by their proper names, in fact, we and the Chinese were among the major partners, now the Europeans will come. To a lesser extent, maybe some American firms. But, nevertheless, we are ready for healthy competition.

Thank you for your expert assessment. I have the same impression from the negotiations, let’s hope that they will end for us in a positive way. I would also like to know from you about Russia’s plans in the nuclear industry, what prospects do we have for development? Maybe you can name examples of other countries with which we can establish contacts in the nuclear energy sector? Maybe after the events that Russia has been going through for the third week, we will be able to redirect our efforts in the nuclear industry, or will our path continue in the way in which it is developing now?

If we had met at the beginning of February, we could have given a very clear, very detailed answer, because if we talk about our presence on world markets, I emphasize, on world markets, because, of course, the Chinese are building more inside the country, but we are the first power on world markets absolutely, without any competition. For the construction of large nuclear power units, we hold about 75-77% of the world market, we are building in 9 countries. We are building, it means we are building, we are not talking about construction, but we are actually building on the ground. Now, of course, the situation is different. There are not just sanctions, but massive, total pressure on our country. Including, of course, the Russian nuclear industry, because we are part of both the Russian economy and the global economy. Based on this, I would answer with a few strokes.

First, we will continue to work, fulfill our obligations as much as the new situation will allow us. Obviously, within the framework of the decisions that are made in our country by the President and the Government. But in general, the traditional position of our leadership, our Government and the Russian nuclear industry is that nuclear energy should be beyond politicization. It is impossible to be outside politics, but it is possible outside politicization, because nuclear energy is too serious, it is too tied to security, it has too long cycles.

Let’s take a modern nuclear power unit: construction usually lasts about 10 years, maybe more, maybe less. The planned period of operation is 60 years – 20 years, what is laid down as an extension of the service life, 10 years – decommissioning. Throughout this period, the supply of nuclear fuel, maintenance of operation, services, training of personnel – only 100 years. That is, with all due respect, nuclear energy is different from the supply of machine-building products, than oil and gas, than military-technical cooperation…

I would prefer not to talk about specific projects now, because this is a very delicate, very delicate work. I just want to mention that our projects are evenly distributed around the world. We are helping the Chinese to build four large nuclear power units with a capacity of 1200 megawatts. We help — this means we are doing projects, delivering a “nuclear island”. Yes, they do a lot of things well themselves, we must pay tribute, but these are our projects and our reactor equipment. Further, we are building four blocks in India, we are building two blocks in Bangladesh, and so on. The list goes on. That is, catching the subtext of your question about the geographical distribution of our presence in the world, we are already very seriously represented in Asia, very seriously. And, finally, Rosatom is not only large nuclear power units. Now we are positioning a new flagship product: low-power nuclear power units with a capacity of 50 megawatts.

The law says: “If you want to sell something successfully in the world, first do it at home.” Now we are implementing two such projects on the basis of already adopted decisions of the Government in our country. These are 4 nuclear power units in floating design to provide the Baimskoye field near Chukotka, the RITM-200 nuclear power units, which are backed by decades of operation of our nuclear icebreakers and technological solutions that go back there. We make the same block in the ground version in Yakutia, also under the support of the mining industry. Thus, we are opening not just a new direction in our work, but, by and large, a new word in the global energy sector. We are not the only ones doing all this, but we are the first. And we have more developments, because we have experience of many years of operation of the icebreaker fleet in the most difficult conditions of the Arctic.

Further, we are making nuclear science and technology centers based on research reactors. There was a pause in the hard 90s – early 2000s. Now we are doing, building both in the world and at home. The innovative project “Breakthrough”, aimed at the development, creation and industrial implementation of a closed nuclear fuel cycle based on fast neutron reactors, the Northern Sea Route, of which we are the operator. We are engaged in new technologies: these are additive technologies, quanta and much, much more. This is contiguous, but again, on the high technological array that we have.

The interview was prepared by intern Anastasia Kulikova on March 11, 2022.