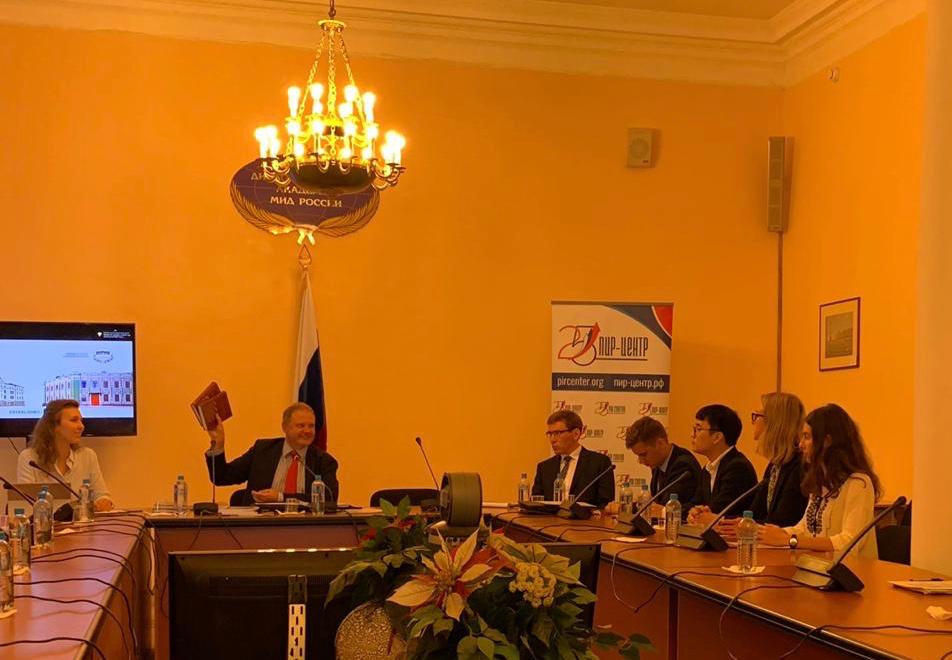 Ten students from Russia, USA and South Korea started their first semester at MGIMO University. Among them are Bachelors of International Relations and International Security as well as students who just started to deepen their understanding of WMD nonproliferation issues.

On September 11, students had the first meeting with their program coordinators, alumni, professors and PIR-Center experts at the Institute of Contemporary International Studies (ICIS) of the Diplomatic Academy of the Russian Foreign Ministry.

Dr. Vladimir A. Orlov, Head of the Center for Global Trends and International Organizations of the ICIS Diplomatic Academy and MGIMO Professor opened the meeting stressing a unique nature of the master’s program as well as the high demand for specialists in the nonproliferation field. “Job itself will be searching for you,” Dr. Orlov said. In addition, professor acquainted students with the recommended literature on nuclear nonproliferation.

Albert F. Zulkharneev, PIR-Center Director and researcher at the Diplomatic Academy, told students about the work of the Center and its key projects. Yulia Sych, Program Coordinator, informed students about PIR-Center educational projects and the structure of the master program in more detail.

After the introductory part, the representatives from the Middlebury Institute of International Studies at Monterey (the USA) greeted the students via the video conference. Among the participant from the American university were William Potter, Director of the James Martin MIIS Center for Nonproliferation Studies, Jeffrey Knopf, Program Manager at Monterey, Elizabeth Bone, Academic and Career Advisor, and Jill Stoffers, Admissions Coordinator. The students introduced themselves and explained their choice of the master program.

Besides, students had an opportunity to meet their Russian professors. So, Deputy head of Foreign Desk at the Kommersant daily newspaper Elena V. Chernenko, members of the Advisory Board of PIR-Center Aleksey V. Ubeev, Associate Professor, Department of International and National Security, Diplomatic Academy of the Russian Ministry of Foreign Affairs Andrey and former senior Russian diplomat Y. Malov, and Commercial Director of International Uranium Enrichment Centre Gleb V. Efremov outlined the plans of the courses talking about the topics which should be covered during the classes and about the grading system.

The students have their first semester at MGIMO ahead: they are going to study Arms Control, International Cooperation in Peaceful Use of Nuclear Energy, Nuclear Nonproliferation Policy of Russia, and Regional Challenges to WMD Nonproliferation, and a unique module on Security issues in Cyber Space.

Veronika Bedenko and Natalia Artemenkova, program graduates of the second cohort, also attended the meeting. They welcomed new students and shared with them their impressions about the program.

The meeting was ended with an informal reception in honor of the beginning of the academic year, where students could communicate with their professors and coordinators in an informal way.

The students have already started studying hard at MGIMO. For the second and third semesters they will go to MIIS (Monterey).  During the fourth semester they will complete their master’s theses and do internships at international organizations, national ministries, leading analytical centers and companies in Moscow, New-York, Washington, Vienna, Geneva, Hague and other centers of nuclear energy, nonproliferation and international studies.

You can find more information about the dual degree master program here http://dualdegree.pircenter.org