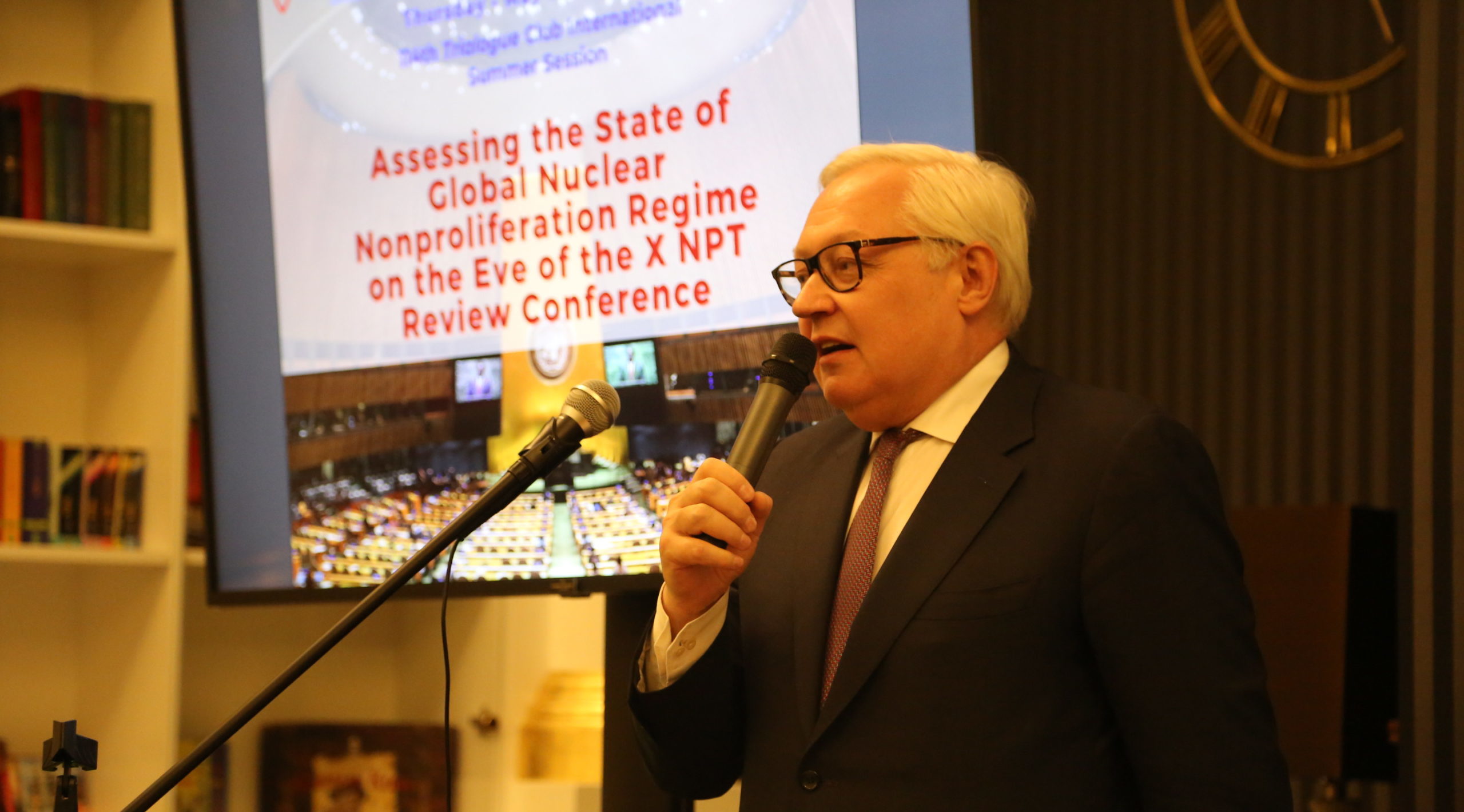 MOSCOW. MAY 24. PIR PRESS. “The NPT has served well the global community for more than half a century. It was able to assuage the threat of nuclear proliferation, guarantee development of international cooperation in peaceful use of atomic energy and created conditions for disarmament. The balance of these three components of the Treaty are key to its viability. We have seen over years attempts by some to rebalance fundamentally very sensitive balance of these three pillars only to the detriment of the overall effort. But the Treaty is still there. And hopefully over years it will not only sustain but become even more inclusive”, – from the speech of H.E. Sergey A. Ryabkov, Deputy Minister of Foreign Affairs of the Russian Federation.

On May 12, the 114th Extended Summer Session of the Trialogue Club International took place. It was dedicated to the topic “Assessing the State of Global Nuclear Nonproliferation Regime on the Eve of the X NPT Review Conference”. This time keynote speaker of the Session was Deputy Foreign Minister of the Russian Federation H.E. Sergey A. Ryabkov who shared his view on why currently, even among the ongoing tensions, the nuclear nonproliferation dialogue was not only possible but necessary. To produce this dialogue, it is needed, first and foremost, to create conditions for such cooperation. These efforts should be undertaken not only by the nuclear states, but also by all members of the international community. Multilateral cooperation is impossible without taking into account the interests of all parties and without observing the principle of indivisible security. H.E. Sergey A. Ryabkov also recalled what efforts Russia has consistently expended to preserve and strengthen the regime of nuclear nonproliferation.

In general, the following issues were raised during the meeting:

• problems of the CTBT entering into force;

• cooperation in the field of peaceful nuclear energy as part of the green agenda;

• prospects for creating WMD-free zone in the Middle East;

• prospects for the JCPOA and the return of the US to the Iranian nuclear deal;

• Russia’s security and the problems of NATO expansion;

• the crisis around Ukraine in 2022 and prospects for peace talks;

• the situation on the Korean peninsula in context of new missile tests in the DPRK and Russia’s position;

• Russian-American dialogue in the field of strategic stability in modern realities;

• the first meeting of the parties of the TPNW and its prospects;

In addition, a new monograph of  PIR Center Russia-U.S. Nuclear Nonproliferation Dialogue: Lessons Learned And Road Ahead was launched, the release of the second commercial edition of the book in August 2022 was announced (the announcement is published on the website of Palgrave Macmillan publishing house). The authors of the monograph were invited to the Session, some of the members of the Club and special guests were presented the first edition of the monograph.

Besides, PIR Center held an avant première of its new report New Nuclear Nine? Assessing Nuclear Proliferation Threats, which examines the risks of the new nuclear-weapon states emerging on the world map.

After the official part of the meeting, PIR Center, together with the members of the Trialogue Club International celebrated its 28th birthday, which took place on May 30, 2022 (PIR Center was established on April 30, 1994). The celebration was also attended by the members of PIR Center’s Advisory Board, special guests of the President Club and the authors of the monograph Russia-U.S. Nuclear Nonproliferation Dialogue: Lessons Learned And Road Ahead.

The Session was moderated by the President of the Trialogue Club International Dr. Vladimir A. Orlov, as well as the Co-Chairs of the Club Elena V. Chernenko and Evgeny P. Buzhinskiy.

The participants of the Session gave a positive feedback on the discussion, underlining the importance of such meetings for the continuation of the dialogue.

More photos you can find here.

If you need any further information about the Trialogue Club International, fees, terms, and conditions of membership, please contact the Club’s Executive Secretary Elena Karnaukhova by phone: +7 (916) 170 03 07 or email: [email protected]