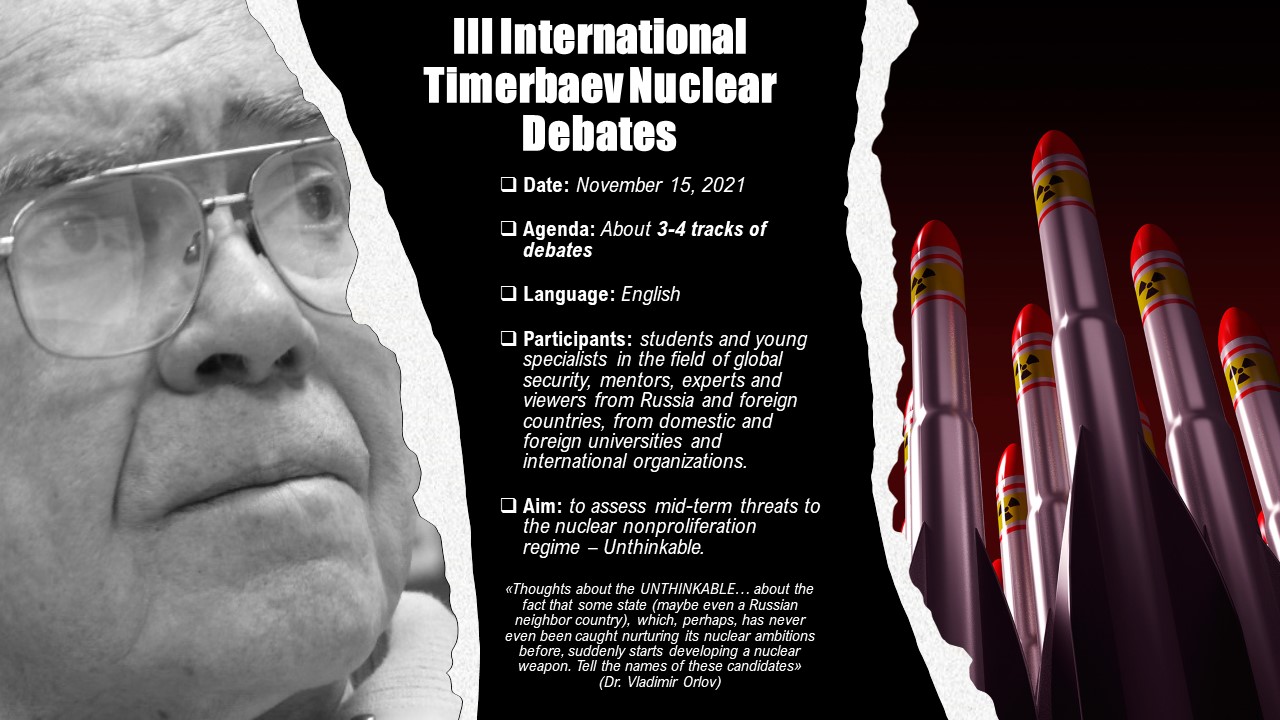 MOSCOW, OCTOBER 25, 2021. PIR PRESS. «Unfortunately, the modern young generation of nonproliferation experts will not be able to personally get acquainted with Ambassador Roland Timerbaev. In 2019, a whole epoch passed away, a man, a legend. But young professionals can get acquainted with his heritage and memories of him. And International Timerbaev Nuclear Debates can help with that. On November 15, we will take a new step in their development – they will become international and multi-stage,» – Vladimir Orlov, Director and Founder of PIR Center.

Ambassador Extraordinary and Plenipotentiary Roland Timerbaev is a foremost authority and one of the most prominent experts in nuclear nonproliferation and nuclear arms control. Being a founding father of PIR Center, he was acclaimed by the international community as one of the authors of the Treaty on the Nonproliferation of Nuclear Weapons (NPT). During the decades of his professional career, Ambassador Timerbaev actively participated in drafting several key international agreements in the sphere of strategic stability and nuclear nonproliferation, including the Anti-Ballistic Missile Treaty, the Agreement on the Prevention of Nuclear War between USSR and USA, the IAEA safeguards system, the Threshold Test Ban Treaty (TTBT), the Peaceful Nuclear Explosions Treaty (PNET). But Ambassador Timerbaev was not only a fighter for peace and an outstanding diplomat in the field of nonproliferation and disarmament but also a great mentor, teacher and friend. Archival materials dedicated to Ambassador Timerbaev are published in the section of PIR Center website «Roland Timerbaev: Memory Gallery» via link.

In 2020 in remembrance of Ambassador Timerbaev PIR Center launched the new scientific and educational project International Timerbaev Nuclear Debates. They will be dedicated to nuclear nonproliferation, disarmament, and strategic stability issues. Being held in English, the Debates bring together young talents from Russia, the United States and other countries, who are ready to contribute to the discussion on strategic issues and able to produce new ideas and approaches to improve the global security environment.

On November 15, PIR Center will hold the III International Timerbaev Nuclear Debates. This year they will bring together students and young specialists in the field of global security from Russia and foreign countries, from domestic and foreign universities and international organizations. There will be students and young specialists from MGIMO University, Middlebury Institute of International Studies at Monterey (USA), MEPhI, Ural Federal University (UrFU), PIR Center and members of the CTBTO Youth Group among the participants of the III International Timerbaev Nuclear Debates. The applications of each of the teams were registered, and the debaters themselves were pre-selected by universities and organizations they represent. As a special feature of the III International Timerbaev Nuclear Debates, each team of debaters will have its own mentor from the nonproliferation, disarmament and global security experts.

The purpose of the III International Timerbaev Nuclear Debates is to work out scenarios in which new nuclear states may appear on the world map. The agenda of the debates in 2021 will be closely related to the PIR Center’s Unthinkable Project – the main participants of the debates will discuss country’s threats to the nonproliferation regime in the medium term. “Thinking of the unthinkable… that there is some state (maybe even a neighbor of Russia), which, perhaps, has never even “failed” with nuclear ambitions before, suddenly begins to produce nuclear weapons. Call such “candidates” by name!”, – Vladimir Orlov, Director and Founder of PIR Center, comments on Unthinkable.

The debaters will mentally carry over into 2031, and argue about the nuclear ambitions of the Republic of Korea, Iran, Saudi Arabia, Taiwan or Japan… The main question will be formulated as follows: “Does the country need nuclear weapons, and should it seek to acquire them?”. The debaters, pretending to be the citizens of a particular country, will try to give their positive and negative answers to this question. In total, within the framework of the III International Timerbaev Nuclear Debates, four debate tracks will be held (in English), each of them will be devoted to a specific country’s threat to the nuclear nonproliferation regime. Each debate track will be opened and will be completed by a voting procedure that will determine which team would be more convincing.

It is expected that debaters of the Timerbaev Nuclear Debates would form the International Student Club named after R.M. Timerbaev, which would become a platform for discussing key global security issues and would contribute to the fostering of a new generation of nuclear nonproliferation and disarmament experts.