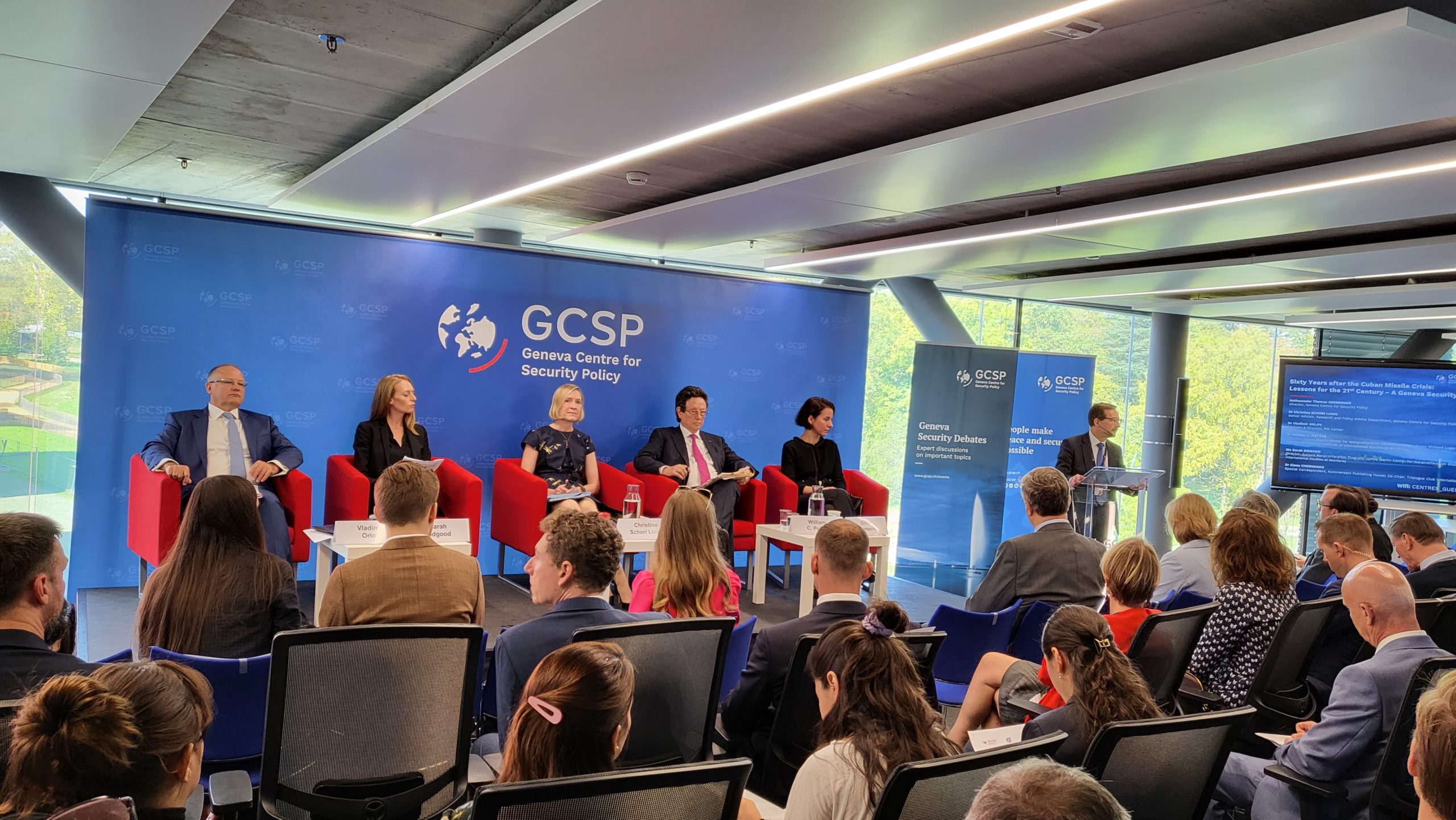 GENEVA. OCTOBER 20, 2022. PIR PRESS. “Dolphins will not help. Very unlikely. As my teacher Ambassador Roland Timerbaev, one of the authors of the NPT, used to tell me – Volodya, full responsibility is only ours of this human race. If we’re not wise, then nothing will not help. As this human rase will be erased and probably replaced by a new one, hopefully, a wiser one”, – Vladimir Orlov, Founder & Director of PIR Center.

On October 19-20, 2022, PIR Center, together with the Geneva Centre for Security Policy (GCSP) and the Center for Nonproliferation Studies in Monterey (CNS/MIIS), is hosting an international conference on “Sixty years of the Cuban Missile Crisis: lessons for the 21st century.” The conference is being held in Geneva (Switzerland). The purpose of this conference is to analyze the lessons learned from overcoming the Cuban Missile Crisis and discuss whether they are applicable to the current international tensions.

What were the underlying and immediate causes of the October 1962 crisis? What factors made it possible to avert nuclear war? What are the similarities and differences between the crisis in 1962 and today? What lessons of the Cuban Missile Crisis are applicable to the current crisis in US-Russian relations? What would need to occur for a new era of nuclear arms control to emerge?

This and other questions were discussed at the public discussion of the conference on October 19.

Ambassador Thomas Greminger, Director, Geneva Centre for Security Policy (GCSP) took the opening remarks and said why we need to reflect on the Cuban Missile Crisis. Because the current escalation in Ukraine is accompanied by nuclear threats, which can lead us to nuclear war. So, we need to move back from the brink. The Cuban Missile Crisis is not just history, it’s a lesson for us. How humanity escaped the nuclear catastrophe then.

The first speaker was Vladimir Orlov, Founding Director, PIR Center. He stated that the lack of informal communication between the two parties in a time of crisis leads to dramatic and dangerous misinterpretations. This is a direct risk to sly down to war because there’s no dialogue or the dialogue is ineffective. The nuclear crisis can open doors to the new nuclear agreements and treaties that make the world more secure, if, of course, the leaders who learn from the crisis itself are wise enough to learn from it.

The next speaker, Sarah Bidgood, Director, Eurasia Nonproliferation Program, James Martin Center for Nonproliferation Studies, Middlebury Institute of International Studies at Monterey, drew attention to the differences and similarities between the Cuban missile and Ukrainian crises. The Cuban Missile Crisis didn’t last more than 8 months like today. Duration matters. As the war drags on, policymakers and officials in both Russia and the United States will have more opportunities to adjust their risk perceptions. Their perceptions of what kinds of behavior are risky can change too.

The third speaker, William Potter, Director, James Martin Center for Nonproliferation Studies and Sam Nunn and Richard Lugar Professor of Nonproliferation Studies, Middlebury Institute of International Studies at Monterey, said that both Kennedy and Khrushchev, unlike Biden and Putin, had experienced war firsthand and were disinclined to believe what they were told by their military advisors. He also stated that there’s little evidence for optimistic assessments, especially given the total absence of trust, respect, and empathy in relationships, which is difficult to restore.

The last speaker in the public discussion was Elena Chernenko, Special Correspondent, Kommersant Publishing House. In her speech, she drew attention to the factor of public awareness, which, on the one hand, public awareness is good and may create pressure on the government to act and prevent catastrophic events from happening. On the other hand, it makes things more difficult for diplomats to try to work this out behind closed doors because there is so much transparency and high expectations for information given to the public.

After the speakers’ speech, the audience could ask their questions in a closed seminar.

The second session “Are there lessons from the post-1962 period about what must be done in order for the United States and Russia to return to meaningful nuclear arms control?” with Thomas Blanton, Director, National Security Archive, George Washington University, Hon. Linton Brooks, Ambassador for Arms Control; Administrator of the National Nuclear Security Administration (NNSA) and a nuclear submarine officer; Served as the US Under Secretary of Energy for Nuclear Security and the Chief negotiator of the Strategic Arms Reductions Treaty, Gen. Leut. Evgeny Buzhinskiy, Elena Karnaukhova, Deputy Director, PIR Center and Alexey Arbatov, Head, Center for International Security, IMEMO RAS (online participation).

After this, a working lunch was held on Strategic Stability in the Times of Global Instability with Vladimir Orlov and William Potter.

Also, for all visitors of the conference, PIR Center presents its publications for review, including the collective monograph of PIR Center “Russia-U.S. Nuclear Nonproliferation Dialogue: Lessons Learned and Road Ahead”.

Recording of the public discussion is available here.

Detailed information about the conference, program, materials and participants can be found here.

For all questions related to this international conference, you can contact Alexey Yurk, junior research fellow of PIR Center, by mail [email protected]