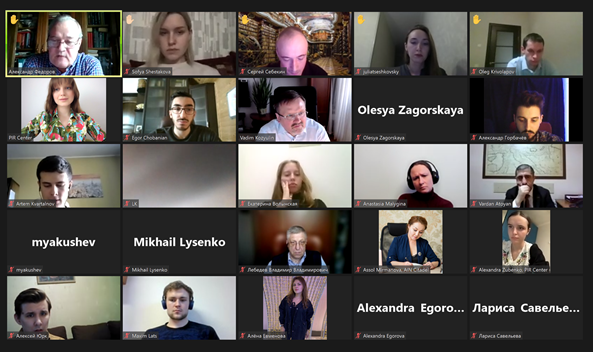 MOSCOW. MARCH 31, 2022. PIR-PRESS. “Practice has shown that the use of modern lethal autonomous weapons (LAWs) does not lead to a violation of international humanitarian law (IHL), but, on the contrary, makes it possible to comply with IHL more reliably. All recorded violations of IHL in recent decades have occurred with the use of weapons of the 20th century. The expert community will have a serious and difficult discussion on how to ensure compliance with international humanitarian law in an environment where emerging technologies are changing the face and rules of warfare,” – Vadim Kozyulin, PIR Center Consultant, Head of the Center for Global Studies & International Organizations of the Institute for Contemporary International Studies of the Diplomatic Academy of the Ministry of Foreign Affairs of the Russian Federation.

As Vadim Kozyulin noted, the discussion on banning or radically restricting LAWs has been ongoing within the United Nations Conferences on Convention on Certain Conventional Weapons (1980) since 2016. Several NGOs, as well as many states insist on banning these systems as they would violate international humanitarian law, such as the principle of proportional damage, avoidance of excessive damage, the principle of taking precautions against incidental civilian causalities, and more.

In his speech, Vadim Kozyulin focused on three key arguments. First, prohibiting or restricting the development of LAWs does not seem feasible. Second, the expert believes, LAWs can comply with international humanitarian law no worse than humans do, and perhaps even better. Third, the real reason why the international community should consider limiting LAWs is human dignity

The audience showed genuine interest in the issues raised by Vadim Kozyulin. During the Q&A session, Vadim Kozyulin explained why Russia has been lagging in the development of unmanned aerial vehicles (UAVs), as well as why and how these vehicles have been used in armed conflicts in the Middle East. Further, the expert expressed his opinion on the use of artificial intelligence (AI) systems in decision-making concerning combat strikes on civilian targets used for military purposes. Finally, special attention was paid to network-centric systems and the ways in which they are applied in practice.

Following the expert seminar, the participants were excited to share their impressions of the discussion.

Sergey Sebekin, Ph.D. on History, lecturer at the Department of Political Science, History and Regional Studies, Irkutsk State University: “Today we live in an extremely interesting era, when right before our eyes the emerging technologies, such as artificial intelligence (AI), are radically changing not only the landscape of our daily lives, but also the current world order along with methods of warfare. Within the framework of the seminar, the leading expert and researcher on the military application of AI, Vadim Kozyulin, presented his fresh professional view on the international legal, military-political, and ethical problems of using AI for military purposes, touching upon the “evolution” of modern conflicts with the introduction of autonomous combat systems and outlining the risks for which the international community needs to prepare. Once again, I was reassured that PIR Center and its team are at the forefront of the process of solving not only existing, but also prospective problems of global security, discussing ideas that are ahead of their time”.

Yulia Tseshkovskaya, PIR Center Alumni Community Member, former Assistant to PIR Center’s Founder (2017-2019): “Vadim Kozyulin raised the topic of international regulation of the use of lethal autonomous systems, which is extremely important today. Several arguments for and against LAWS suggest the issue requires deep discussions and high-quality analysis. The development of technology is proceeding at a rapid pace, the process started decades ago, and it can no longer be stopped. In addition, the pandemic gave a powerful impetus to the trend towards automation, outlining new contours of technological development. It seems prudent to raise not the issue of banning SAS, but rather of regulating their use. Despite the emotional statements of many human rights organizations about the need for a total ban on LAWS, representatives of countries leading developments in this area argue that automated systems will be able to comply with the laws of war better than a human would, as well as reduce human losses. The high level of material and technical preparation of the army does not always guarantee superiority over the adversary since emotions and morale related to the human factor can lead to negative consequences. Obviously, the use of LAWS excludes this side of the issue, thereby minimizing the possible risks in this regard. However, along with these advantages, there certainly remain threats associated with the use of artificial intelligence in armed conflicts”.

Alexey Yurk, PhD student at St Petersburg University, PIR Center intern of the Nuclear Nonproliferation and Russia Program: “Lethal autonomous systems are a branch of military science that is just beginning to be studied and regulated today, but tomorrow it will play a huge role both in world politics and on the battlefield. In this regard, it was very useful and interesting to listen to the report of Vadim Kozyulin as a person who has been dealing with this issue for several years and is a true expert in this field”.

The recording of the event can be viewed via the link.