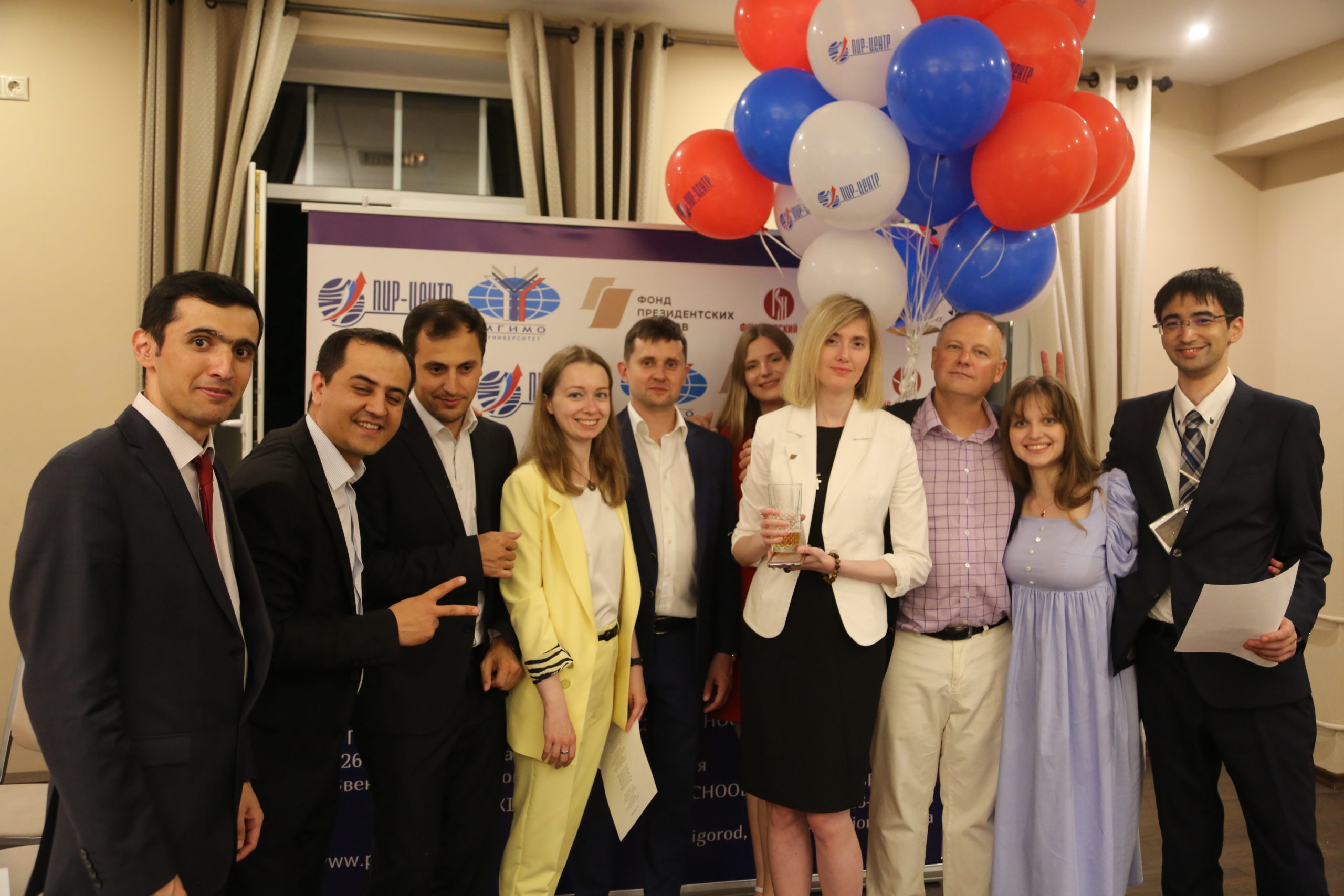 MOSCOW. JULY 8, 2022. PIR PRESS. “If the heart only yearns for a feast, Zvenigorod, like a magnet, attracts alumni of PIR Center. And they come for and with songs and poems, for long and lively discussions on topical security issues, for the pleasure of meeting friends and picturesque views. I am always glad to meet PIR Alumni Community!”, – Natalia Artemenkova, a graduate of PIR Center International School on Global Security (2018), as well as the International Dual Degree M.A. Program “Global Security, Nuclear Policy and WMD Nonproliferation” (2017-2019).

On June 25, within the framework of the XXI International School on Global Security, a traditional meeting of PIR Alumni Community members took place. Colleagues, friends and partners of PIR Center, all those who motivate us to move on with their successes and achievements, support and care, gathered in Zvenigorod, Moscow region. For the first time in the history of PIR Center and the School, a meeting of members of PIR Alumni Community was held in the format of MASLIN-FEST – in honor of Evgeny P. Maslin, Colonel General (Ret.), head of the 12th Main Directorate of the Ministry of Defense of the Russian Federation, member of PIR Center Executive Board. With this meeting, we wanted to honor the memory of Evgeny Maslin not only as a talented statesman, patriot of his country, reliable colleague and comrade, but also as a lover of poetry, a lover of a song, a lover of warm friendly meetings.

The event was attended by students and lecturers at the International School on Global Security, members of PIR Center Advisory Board and PIR Center Executive Board, PIR Alumni Community members. So, among them were Associate Professor of the Department of International and National Security of the Diplomatic Academy of the Russian Foreign Ministry Andrey Malov; war correspondent, executive editor of the newspaper Independent Military Review (Nezavisimoe voennoe obozrenie) Dmitry Litovkin, who in 1998-2000 was a special correspondent of the journal  Yaderny Kontrol ; a junior researcher of the Center for International Security of the IMEMO RAS Daria Selezneva; Director of Relations with state and public organizations of the BRICS National Research Commitee Valeria Gorbacheva and many others.  “I would like to express my gratitude to PIR Center for an excellent event. This is a good reason for alumni of past International Schools of PIR Center to meet. Following the results of this year’s School, PIR Alumni Community was again replenished with new participants, experts from different countries. This long-standing tradition of international schools of PIR Center needs to be further maintained. I think that the gala dinner dedicated to the memory of Evgeny P. Maslin was undoubtedly a success and there was also a great merit of the organizers”, – Oleg Krivolapov, a senior researcher at the Institute for US and Canadian Studies, an alumnus of the XX International School on Global Security, shares his impressions.

Even though the meeting of PIR Alumni Community was held in the format of MASLIN-FEST for the first time, the program of the event was striking in its diversity and breadth of coverage. The participants of the meeting watched excerpts from the film about Colonel General (Ret.) Evgeny P. Maslin, as well as some episodes from the interview prepared by PIR Center with Colonel General Vladimir N. Verkhovtsev, Evgeny P. Maslin’s replacement as a Head of the 12th Main Directorate of the Ministry of Defense of the Russian Federation (2005-2010), currently General Director of the mining division of the State Corporation ROSATOM Atomredmetzoloto uranium holding.

Albert Zulkharneev, currently a member of PIR Center Advisory Board, Acting Head of the Representative Office of Rossotrudnichestvo – Russian House in Bishkek -, made a speech for the members of PIR Alumni Community gathered in Zvenigorod. From 2007 till 2021, Albert Zulkharneev worked at PIR Center in various positions (PIR Center Education and Training Program Director, PIR Center Executive Director in 2013-2015. PIR Center Director in 2015-2019. Consultant to PIR Center in 2019-2021, then Advisor to Director of PIR Center). In his welcoming speech Albert Zulkharneev noted: “Dear friends, may I congratulate you on graduating from PIR Center International School on Global Security and on such a wonderful holiday of MASLIN-FEST. It couldn’t have been better to come up with a name for such an event. When I was the organizer of the School, I always waited for the arrival of Evgeny P. Maslin. Evgeny P. Maslin was a wonderful person. He was a man full of life, loving life, interested in everything that was the brightest, talented, interesting, unusual. I think that’s why he was with PIR Center for many years. This was a man, who did a lot for our country, who instructed us, gave us very wise guidelines. He believed that our people should live richly, well, longer and safely. He did everything for his part, so that our country could live peacefully and joyfully. “...”. Hey pals, we must not grow old in our hearts. Singing till the end the song that we have invented. We are ready for the long journey we can only get by plane to this taiga country…”.

One of the parts of the MASLIN-FEST was the Poetic Evening. The poems were performed by Ulyana Artamonova, junior researcher at the Center for North American Studies of the IMEMO RAS (“The Ballad about Stubbornness” by Leonid Filatov); Sergey Semenov, a researcher at PIR Center (“I work from morning to night”, “We were devoted to work”, “I’m lazy. There are no forces for a writing PhD thesis”); Alexandra Zubenko, a junior researcher at PIR Center (a letter from Tatiana Larina to Eugene Onegin translated by James E. Falen), Vladimir Orlov (poems by Maximilian Voloshin).

The stars of the Play me Music heading were General Director of PIR Press LLC Tatiana Zhdanova, who played domra, as well as Vadim Kozyulin, consultant of PIR Center, Head of the Center for Global Studies & International Organizations of the Institute for Contemporary International Studies of the Diplomatic Academy of the Ministry of Foreign Affairs of the Russian Federation, who pleased the participants of the meeting with bard songs played with the guitar. The musical evening ended with a performance of Oleg Shakirov, a consultant of PIR Center, who read rap compositions on some burning problems of international relations under the heading “And in my soul I sing“.

After that, the First Charity Auction of PIR Center took place, at which unique editions of unique publications of the PIR Center from different years, books and magazines with autographs of the authors were raffled off. Among them: Security Indixe for 2012, 2013, and 2014, research papers authored by leading experts in the field of global security: Roland M. Timerbaev, Dmitry G. Evstafiev, Vadim B. Kozyulin, Dmitri V. Polikanov, Ivan A. Safranchuk, etc. MASLIN-FEST ended with the singing of the anthem of PIR Center the author of which is Lyubov Soldatkina, member of PIR Center Executive Board, Head of the Direction of Expertise, Analysis and National purposes realization control services, All-Russian People’s Front.

The meeting of PIR Center friends, partners and colleagues was held on June 25 brightly, vividly, fervently, with enthusiasm. Unfortunately, not all PIR Alumni Community (and this is almost more than 1000 people scattered around the world) were able to join our event. But this did not prevent them from sending warm greetings to PIR Center! So, the former deputy director of PIR Center, now a member of PIR Center Advisory Board Sergey G. Mursankov shared with us his memories: “I will be with you mentally, but, unfortunately, I cannot come… I often remember how he [Evgeny P. Maslin – editor’s note] shouted Vive la Serbie at the top of his voice in a restaurant near the NATO headquarters in Brussels, with a glass in his hand, causing shock to NATO officers (amid their operation in the Balkans). He was a very cheerful man. Big greetings to everyone who knows and remembers me”. We are looking forward to new meetings with members of PIR Alumni Community – warm, sincere and joyful for each of us.

If you have any questions about PIR Alumni Community, please contact the Assistant to Director on Special Projects & Education and Training Program Coordinator Elena Karnaukhova via email  edu@pircenter.org.