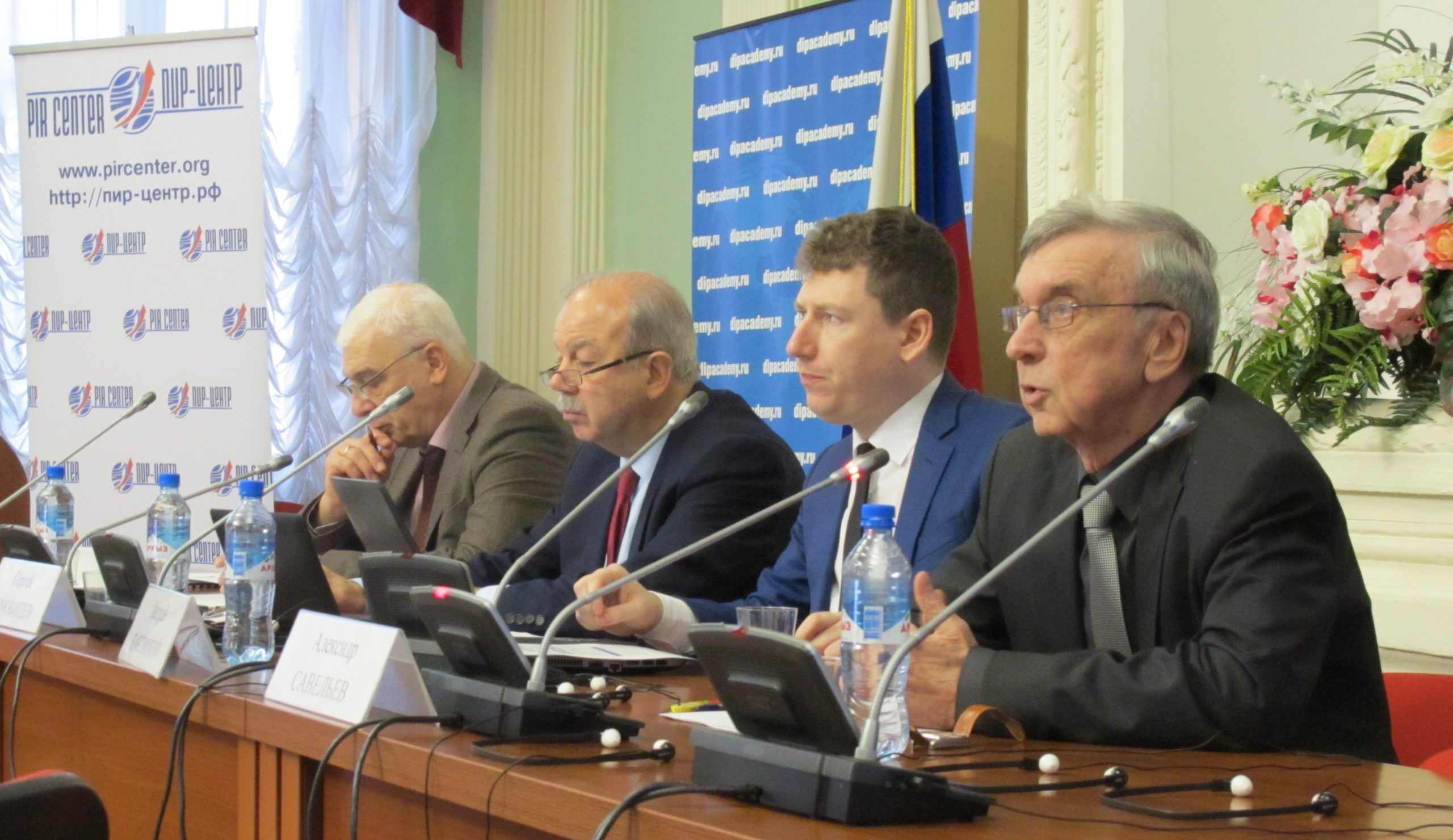 MOSCOW, FEBRUARY 8. PIR PRESS. — “Vienna document is a good example of a politically binding agreement having a verification mechanism. This system works, however, as long as it is a multilateral arrangement reached within the framework of OSCE. Bilateral political documents concerning arms control function quite ineffectively”, – PIR Center Board Chairman Evgeny Buzhinskiy.

Discussion on the future of strategic stability is impossible without tackling the modern problems of verification. Verification mechanism is one of the key elements of both arms control system and disarmament.

One of the PIR Center’ seminars in collaboration with Diplomatic Academy of Russian Foreign Ministry and The Swedish Radiation Safety Authority in the end of 2018 was devoted to evaluating the role of verification in these two spheres.

During the first session experts discussed whether the existing verification system in arms control is optimal and whether it can be modified so that the countries needs for security are met better.

The verification system of the US-USSR agreements passed through several phases: from the national technical measures in SALT I and SALT II to onsite inspections and continuous monitoring systems at industrial plants in INF Treaty and START I. Alexander Savelyev,Chief Research Fellow of IMEMO, described this evolution as a natural process due to the growing complexity of agreements.

The experts emphasised that the existing verification system is not a universally reliable instrument to control the compliance with the agreements.

The verification mechanism in an agreement neither guarantees compliance with the document nor it prevents accusations of violations from other countries. “This is proved by a good example of NEW START Treaty implementation. Within the framework of the treaty 18 mutual onsite inspections were carried out yearly. However, Russia made a claim that the USA has reached the indicators determined by the treaty in such a way that it was impossible to verify whether these strategic offensive arms were really made unusable,” – commented Sergey Oznobishchev, Head of the Sector of the Military-Political analysis at IMEMO. He believes that maintaining the verification system of INF treaty would not have brought any opportunity to save the agreement. “There would be higher chances to overcome disagreements, but still these mechanisms would not prevent a serious crisis in the current political situation,” – he concluded.

The strict verification mechanisms do not contribute to strengthening the trust between the parties to the treaty. These instruments can pose a “threat of the possible increase in mistrust and confrontation between the parties. Detecting even a slight deviation from the determined procedure is considered a “violation”. In such case common sense stops being a restraining factor while political decisions are made. Emotions and the desire to punish the partner may prevail,” – noted Alexander Savelyev.

Despite these limitations, arms control system is not viable without certain verification instruments determined by the treaties. Participants of the seminar were sceptical about the initiatives to introduce verification schemes only by means of the national technical control systems (the variant considered by the US National Security Advisor John Bolton). Without inspections and information exchange these measures will not suffice to ensure the parties meet obligations, the experts concluded.

One of the alternatives to the present models of treaties is the transition from legally binding to more flexible politically binding agreements. In such a case it would be difficult to apply the previous experience of building verification mechanisms as they have traditionally been an element of international agreements. “Vienna document is a good example of a politically binding agreement having a verification mechanism. This system works, however, as long as it is a multilateral arrangement reached within the framework of OSCE. Bilateral political documents concerning arms control function quite ineffectively,” – PIR Center Board Chairman Evgeny Buzhinskiy.

Verification issues are also important when discussing nuclear disarmament. On the one hand, the need to verify the process arises at the last stage of universal nuclear disarmament according to the article IV of NPT or earlier if one of the existing nuclear states decides to abandon its arsenal. In this context some countries suggest that necessary mechanisms and competences should be worked out already. The involvement of non-nuclear states into the verification initiatives can also be considered as a sign of progress in multilateral disarmament, which is important regarding the upcoming 2020 NPT Review Conference. Moreover, the international community already has some positive experience of successful verification in South Africa, Post-Soviet republics and Iraq. At the same time the issues of multilateral verification are not a priority at present. Additionally, there is a threat of critical information transfer to the representatives of non-nuclear states in case of their participation in nuclear arms verifications.

During the second session of the seminar, experts summarized international experience in the field of nuclear disarmament verification.

Senior Researcher at the UN Institute for Disarmament Research Pavel Podvig presented the institute’s research in the field of nuclear disarmament verification that is achieved without the risk of non-nuclear countries obtaining access to sensitive information. “The disarmament process can be structured in such a way as to control the absence of nuclear weapons and their components, as well as military fissile materials. By consistently implementing such an approach to disarmament, it is also possible to eliminate the need to exchange data on the number and types of nuclear weapons and to monitor the dismantling of nuclear weapons withdrawn from service. The focus of verification activities will be shifted to control the fissile materials, which provides more reliable guarantees of the irreversibility of nuclear disarmament,” he stated.

Director of the International Relations Office of the Swedish Radiation Safety Authority Lars van Dassen shared the experience of the Four-Party Partnership for Verifying Nuclear Disarmament, which includes the United States, the United Kingdom, Norway and Sweden. According to Mr. Van Dassin, US-Russia arms control treaties and partnership activities are complementary elements, “the START aims to reduce and verify the number of deployed missiles, submarines and bombers, but not to destroy warheads and fissile material, and the Four-Party Partnership lays opportunities for future nuclear disarmament in general.”

Andrei Malov, PIR Center Advisory Board member, Associate Professor of the Department of International and National Security of the Diplomatic Academy of the Russian Foreign Ministry highly assessed the level and scale of verification procedures validity within the framework of the Four-Party Partnership, as well as the accumulated experience of verification. At the same time, he warned “non-nuclear states and radicalized public activists against false expectations regarding the ease and practicality of such procedures, regardless of strategic context and readiness of the de-facto nuclear states themselves.”

In his comments Alexander Trofimov, the head of the Division for military and strategic problems of the Department for Non-Proliferation and Arms Control of the Russian MFA, noted that countries often move away from key issues of disarmament and switch to important but premature topics. According to him, “one of these topics is multilateral verification. But verification does not happen without reference to a specific agreement. The international community should develop an understanding of next steps in the field of nuclear disarmament, after which the parties involved will agree on verification, which, in fact, is a technical measure to monitor the implementation of the agreement.”

The opening remarks were given by Oleg Ivanov, Vice-Rector of the Diplomatic Academy and Albert Zulkharneev, PIR-Center Director. Sessions were moderated by Andrei Baklitsky, PIR Center Consultant, Research Fellow at the Institute of Actual International Problems of the Diplomatic Academy and Adlan Margoev, PIR Center “Russia and Nuclear Non-Proliferation” Program Director.

The seminar was attended by over sixty experts, including representatives of universities from Yekaterinburg, Novouralsk, St. Petersburg and Tomsk, as well as students of MGIMO and the Middlebury Institute of International Studies in Monterey dual degree master’s program in Global Security, Nuclear Policy and WMD Non-proliferation.

On issues related to the PIR Center program “Russia and Nuclear Nonproliferation” you can contact Adlan Margoev via phone +7 (495) 987 19 15 or via email   margoev@pircenter.org.