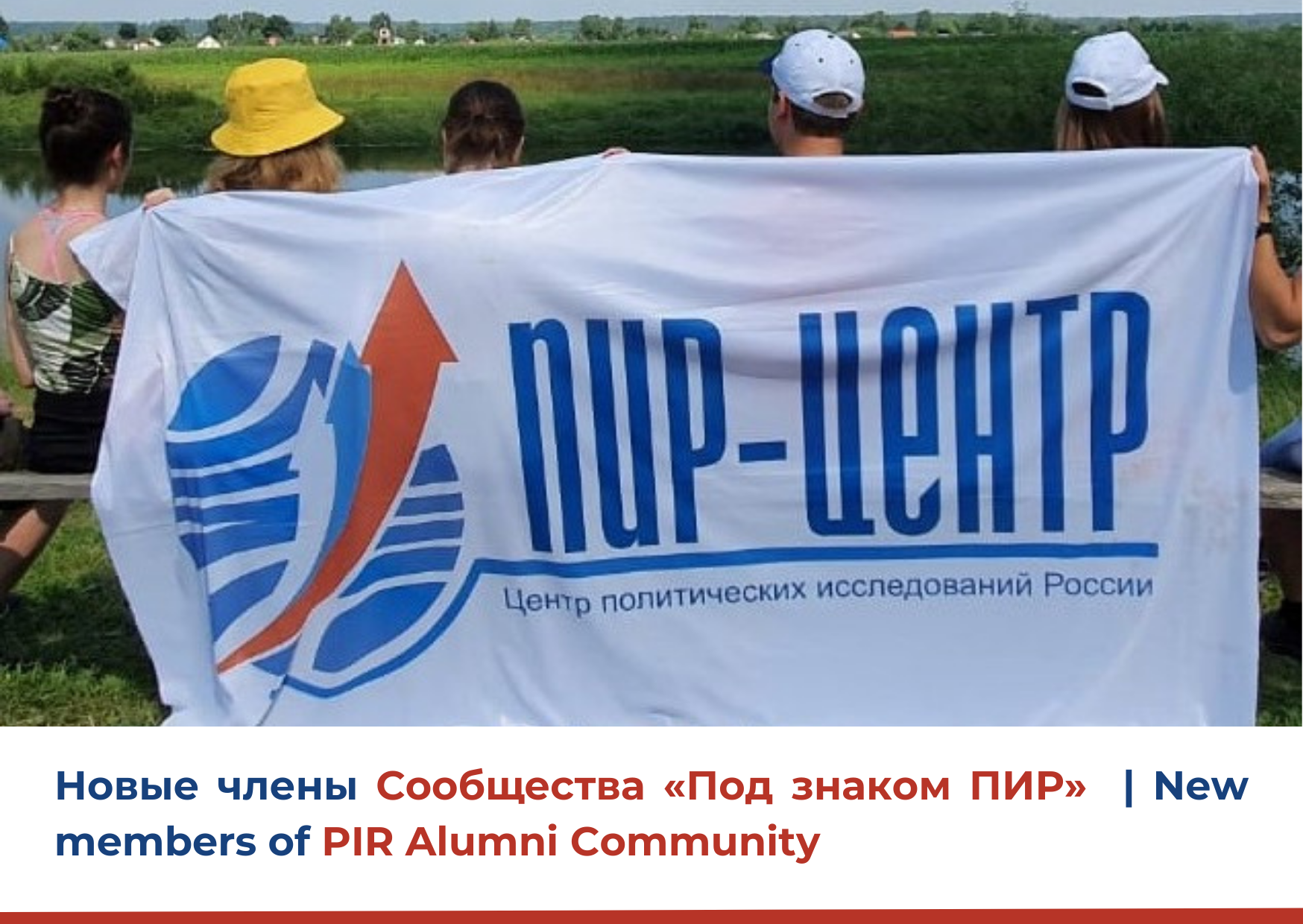 MOSCOW. DECEMBER 23, 2021. PIR PRESS. «We rejoice in the vibrant, unique mix of PIR Alumni Community. We are proud of those who stood at the origins of PIR Center; and we thank all those who contribute to its development even now», – Vladimir Orlov, PIR Center Director and Founder.

Looking back at all the accomplishments made in the past year, one can see how PIR Alumni Community has continued to thrive – in 2021 it was joined by bright, renowned experts – theorists and practitioners – who focus on global security and wide international relations agenda. In 2021, PIR Center Advisory Board welcomed several new individual members: H.E. Yuri Nazarkin, Ambassador Extraordinary and Plenipotentiary of the USSR and Russia (retired); Dr. Andrey Baykov, Vice-Rector for Science and Research at MGIMO University, Chief Editor of the top-ranked Russian academic journal International Trends, and Mr. Albert Zulkharneev, Deputy Head of the Representative Office of Rossotrudnichestvo – Russian House in Bishkek, Kyrgyzstan.

Yuri Nazarkin, Ambassador Extraordinary and Plenipotentiary of the USSR and Russia (retired), is a well-known diplomat with many years of expertise on disarmament issues. Between 1956 and 1992, he worked at the system of Ministry of Foreign Affairs of the USSR / Russia, for roughly two decades – on issues of disarmament and nuclear nonproliferation. Yuri Nazarkin contributed actively to drafting the Treaty on the Non-Proliferation of Nuclear Weapons (NPT), the Biological and Toxin Weapons Convention (BTWC), the Treaty on the Prohibition of the Emplacement of Nuclear Weapons and other Weapons of Mass Destruction on the Sea-Bed and the Ocean Floor and in the Subsoil Thereof (also known as the Seabed Arms Control Treaty), etc. In the period from 1987 to 1989, he acted as Representative of the USSR to the Conference on Disarmament. Also, he negotiated the draft of the Chemical Weapons Convention. Ambassador Nazarkin was the head of the delegation of the USSR during the US-Soviet negotiations leading to the conclusion of the 1991 Strategic Arms Reduction Treaty (START-1 Treaty). In 1992-1995, Yuri Nazarkin served as Deputy Chairman of the Security Council of the Russian Federation. Since 1996, after retiring, he has been engaged in teaching activities: currently, he is a Professor and Honorary Doctor (honoris causa) at the Geneva School of Diplomacy and International Relations; he also was a Professor at the Geneva Centre for Security Policy (GCSP). Ambassador Nazarkin was an honorary member of the Centre russe d’etudes politiques (2006-2021). “I came across PIR Center through my friend Roland Timerbaev”, – recalls Ambassador Nazarkin. – “I consider PIR Center as an extremely relevant and meaningful organization not only in disarmament and nonproliferation issues but also in the broader sphere of international security. The role of PIR Center is being particularly pronounced now that contacts at the official level are so strained because the American side has taken such a negative position”.

Dr. Andrey Baykov is Vice-Rector for Science and Research at MGIMO University, Chief Editor of the top-ranked Russian academic journal International Trends, Ph.D. (Political Science), Associate Professor, an author of numerous works on integration trends in world politics, geopolitical processes, and megatrends of the development of the modern world, as well as on international political aspects of the development of the post-Soviet space and political anthropology. He has outstanding qualifications in the field of international relations, multilateral cooperation, and international security. Dr. Baykov has profound experience in educational and research fields and has effectively coordinated multiple project activities including at the international level. He is a member of the Coordination Council for Youth Affairs in the Sphere of Science and Education under the Presidential Council for Science and Education. Besides, his responsibility encompasses the International Dual Degree M.A. Program Global Security, Nuclear Policy and WMD Nonproliferation developed by MGIMO University, the Middlebury Institute of International Studies at Monterey, USA, and PIR Center.

Since December 2021, Albert F. Zulkharneev has held the position of Deputy Head of the Representative Office of Rossotrudnichestvo – Russian House in Bishkek, Kyrgyzstan. Albert Zulkharneev’s professional career began at PIR Center, where he worked for more than 12 years, beginning as an intern and later coordinator (2007), eventually assuming the position ща PIR Center Education and Training Program Director, Executive Director and, finally, Director (2015-2019) of PIR Center. From 2019 to 2021, he has worked as a consultant within PIR Center’s Global and Regional Security: New Ideas for Russia program, and as an advisor to PIR Center’s Director (2021). In 2019 – 2021 Albert Zulkharneev has also served as Deputy Head of the Projects’ Department at Executive Office of the All-Russia People’s Front (ONF). Over the years of his work at PIR Center, Albert Zulkharneev has made a significant contribution to the development of our organization. Among his achievements is the development of the International School on Global Security, programs to improve the skills of nuclear nonproliferation, disarmament, and global security experts and professionals, as well as the International Dual Degree M.A. Program Global Security, Nuclear Policy and WMD Nonproliferation developed by MGIMO University, the Middlebury Institute of International Studies at Monterey, USA, and PIR Center.

“If you want to part ways with your laziness and procrastination, are bored of doing just this one thing, have long dreamed of undertaking an intellectual challenge, and need the most energetic supervisors in the world, do get a job at PIR Center – it will be the right decision”, – Alexandra Zubenko comments on her work at PIR Center.

In his turn, Artem Kvartalnov believes that “It is always a pleasure to be part of something where you can make a difference and deliver tangible results. PIR Center is one of those organizations where this actually is possible. I hope that having assumed this new position, I will be able to apply my knowledge on arms control and nuclear nonproliferation for the benefit of Russia and the world. PIR Center continues to develop. Thanks to several leading experts on the issues, its Advisory Board has once again been expanded. Being a part of these processes is incredibly exciting”.

“I have been interested in nuclear nonproliferation issues for 6 years now, and PIR is an opportunity for me to apply my knowledge and skills in my profession for the first time. The PIR Center is an excellent school that fosters a responsible approach and perfectionism in my work, which will definitely help me in my future career. Among the staff and members of PIR Center Expert Council there are a lot of inspiring people – those I want to look up to, which is what I try to do”, – Galina Salnikova says, summing up the words of the PIR Center junior research staff.

“PIR Center is not just a place of work where you come to make a living. It is more than that. PIR Center is your chance to cultivate a tough will, self-discipline, and self-control. It is a chance to overcome your weaknesses and realize your strengths. This is a real army, a kind of a boot camp – for everyone who wants to devote their lives to working on nuclear nonproliferation, disarmament, and global security issues. PIR Center staff members, its experts as well as the entire international PIR Alumni Community are the best motivator for a person at the beginning of his or her career as an international security expert”, – stresses Elena Karnaukhova, Executive Secretary of PIR Center Advisory Board, PIR Center Education & Training Program Coordinator.

We highly appreciate each and everyone who belongs to our PIR Community and wholeheartedly support its endeavors, wishing it to grow and thrive for many years to come!