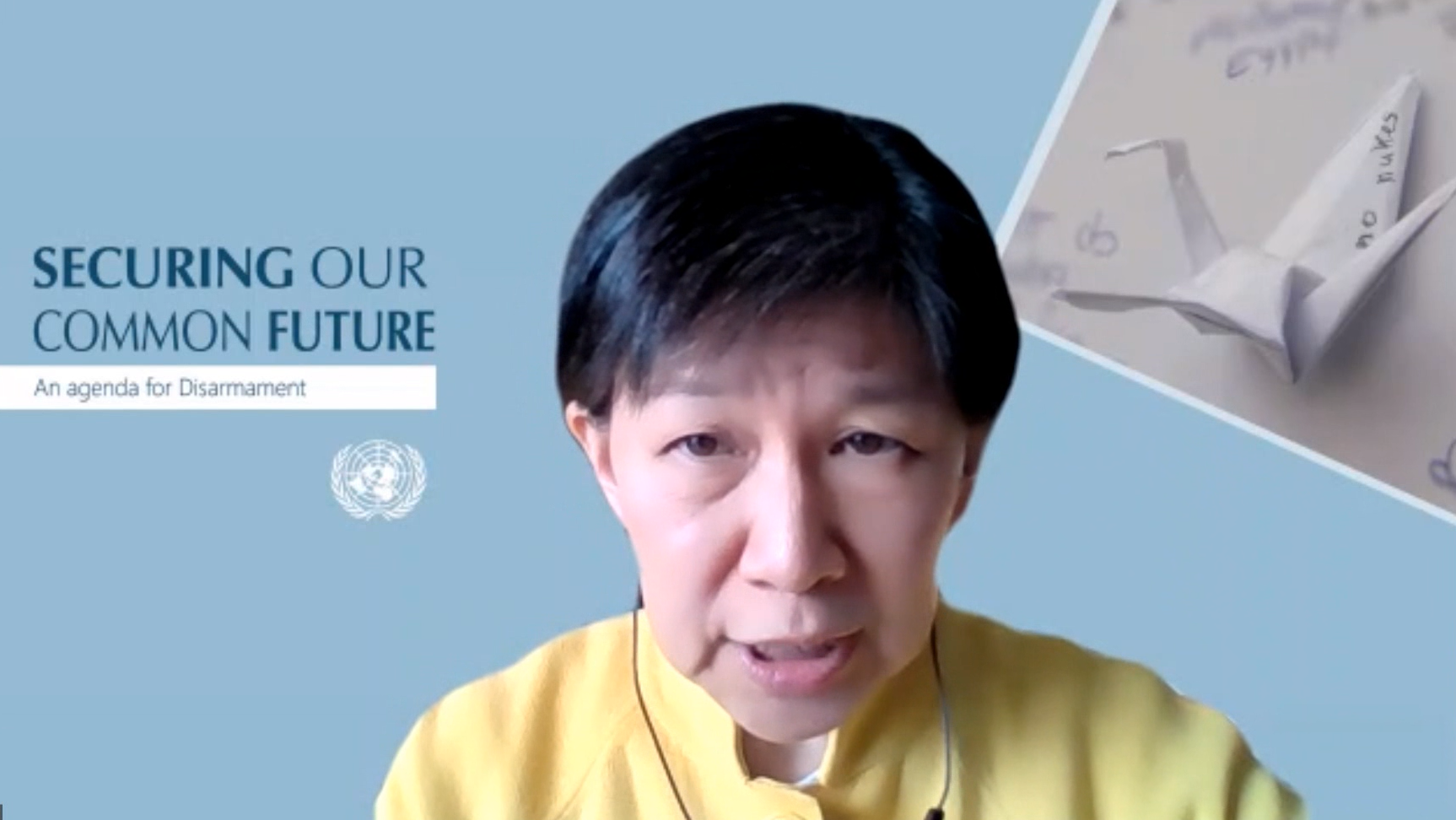 MOSCOW. DECEMBER 28, 2021. PIR PRESS. “Education is, as Herbert George Wells suggested, one of humanity’s greatest assets in the race to prevent future catastrophes and this is nowhere truer than with respect to the need to prevent any future use of nuclear weapons… This programme continues to turn out young experts who go on to represent their governments or work for the most important institutions in our field. I am pleased to say that many have also been outstanding UNODA interns. They have been instrumental to our work”, – H.E. Izumi Nakamitsu, UN Under-Secretary-General and High Representative for Disarmament Affairs.

On December 20, as part of the Dual Degree M.A. Program Global Security, Nuclear Policy and WMD Nonproliferation (developed by MGIMO University, Middlebury Institute of International Studies in Monterey, MIIS, USA, and PIR Center) PIR Center had the honor of having Ms. Izumi Nakamitsu, UN Under-Secretary-General and High Representative for Disarmament Affairs, deliver a public lecture. The event was held under the auspices of the PIR Center’s NONPROLIFERATION.WORLD online platform, which is intended to entail a common scientific, educational, and communication portal for current and future generations of international security experts.

In his opening remarks, PIR Center Director and Founder Vladimir Orlov recalled that the upcoming 2022 year marks the 20th anniversary of the Report of the UN Secretary-General United Nations study on disarmament and non-proliferation education which was submitted upon the conclusion of the work of the Group of Governmental Experts on the subject in July 2002. Vladimir Orlov also took part in the preparation of practical recommendations to promote disarmament and nonproliferation education and training. Over the years PIR Center sees to the implementation of these recommendations through educational and training projects, including the International School on Global Security, Midweek brainstorming sessions, Dual Degree M.A. Program in Nonproliferation Studies (MGIMO-MIIS-PIR Center), International Timerbaev Nuclear Debates, and the NONPROLIFERATION.WORLD online educational and training platform.

In her lecture on the topic Nuclear Disarmament – a Dream, an Ultimate Goal, a Commitment?  Ms. Izumi Nakamitsu noted the fundamental importance of nuclear nonproliferation as one of the pillars of the Treaty on the Non-Proliferation of Nuclear Weapons (NPT Treaty). She stressed that, although the issue of disarmament may well be one of the most controversial ones at the upcoming NPT Review Conference, it is nevertheless possible to find common ground if states demonstrate sufficient political will. Ms. Nakamitsu also highlighted the importance of nuclear nonproliferation and disarmament education as a key factor in continual knowledge transfer as well for building a new generation of outstanding nonproliferation professionals who will continue to strive towards nuclear disarmament.

Among the participants of the public lecture of Ms. Izumi Nakamitsu were not only students of the Dual Degree M.A. Program in Nonproliferation Studies (MGIMO-MIIS-PIR Center), but also representatives of international organizations, Russian and foreign think-tanks, universities, as well experienced and novice experts in international relations, nuclear nonproliferation, disarmament, and global security in general. Some of them shared their impressions with us.

“The Nakamitsu lecture was very interesting. She explained some of the nuances of arms control diplomacy and commented on how important education is in successful arms control and limitation”, – Mark Myers, a 6th cohort student of the Dual Degree M.A. Program in Nonproliferation Studies (MGIMO-MIIS-PIR Center).

“Such meetings with high-ranking people who take part in the nonproliferation decision-making on a daily basis, are always insightful and useful. I found Ms. Nakamitsu’s lecture inspiring, although somewhat provocative, too. I shared my ideas on nuclear disarmament and received a response from one of the key UN nonproliferation officials. What could be better?”, – Galina Salnikova, a 6th cohort student of the Dual Degree M.A. Program in Nonproliferation Studies (MGIMO-MIIS-PIR Center).

“On January 4, 2022, the X NPT Review Conference will commence. In this context, any such meeting with a UN official is important both for students involved in this topic and for experts. This is an excellent opportunity to clarify the official UN position on disarmament and arms control”, – Oleg Krivolapov, Senior Research Fellow, Institute for the US and Canadian Studies, RAS.

“I attended with interest the online lecture of the UN Under-Secretary-General and High Representative for Disarmament Affairs Izumi Nakamitsu. In her speech, Ms. Nakamitsu pointed out several predicaments with regards to nuclear disarmament, such as the lack of states’ commitment to ratify the Comprehensive Nuclear-Test-Ban Treaty (CTBT) and seek to its entry into force. Rather than reducing nuclear arsenals, states’ raising budget allocations to modernize their arms has become a cause for concern. Against the backdrop of this unsettling situation, reliance is placed on the adoption of effective, long-term solutions during the X NPT Review Conference”, – Oksana Pekusheva, Third Secretary, Russian Foreign Ministry.

As for me, meeting Izumi Nakamitsu left an indelible impression. This lecture helped me advance my knowledge of disarmament. I got a more nuanced understanding with regards to the TPNW, its supporters and opponents, and it will certainly help me when working on my scientific article. However, what I remember most of all is the genuine enthusiasm with which Ms. Nakamitsu shared with us, young specialists, her idea of the future of disarmament. Despite the fact that I participated in the lecture via Zoom, her convincing and inspiring words reached me, too. In the future, I would like to personally meet with Ms. Nakamitsu to touch upon the disarmament issues and be able to contribute to its implementation”.

“The lecture by the UN High Representative for Disarmament Affairs Izumi Nakamitsu was extremely informative in terms of learning about the UN’s approach to disarmament. It is always interesting to listen to a practitioner, particularly given that modern technologies and PIR Center allow us to have this opportunity. At the same time, the lecture and the discussion that followed were encouraging, too: through the foggy and turbulent environment of the global nonproliferation regime one could distinguish real prospects for effective multilateral disarmament. I have no doubt that the online meeting with Ms. Nakamitsu instilled confidence in everyone, that diplomacy is alive, and that the UN continues to work hard on international security agenda”, – Maxim Lats, Student of Saint Petersburg State University Master Program Strategic and Arms Control Studies, PIR Center Edication&Training Program Graduate.

“PIR Center deserves the highest appraisal for pulling off an event attended by high-ranking officials like Ms. Izumi Nakamitsu. I was fascinated by Ms. Nakamitsu’s genuine devotion to nuclear nonproliferation and disarmament and her strong commitment to ensuring that relevant knowledge and diplomatic toolkits be passed on from more experienced UN nonproliferation officials to younger professionals”, – Larisa Saveleva, MSc, War Studies, Swedish Defence University.

The lecture’s recording is available on the PIR Center’s YouTube channel. It will also be published on the NONPROLIFERATION.WORLD online educational and training platform. Izumi Nakamitsu’s lecture is also available in print.