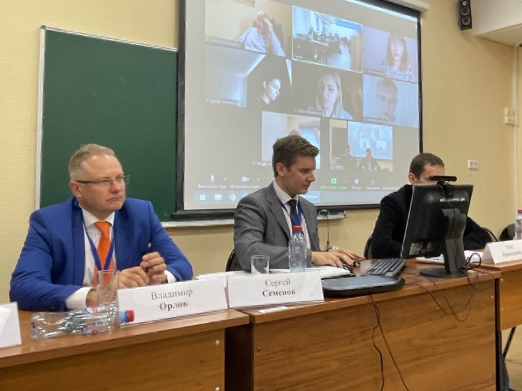 Main PIR Press News On The XIII Convention Of Risa PIR Center Held The Expert Seminar “Elements Of The Strategic Equation: How To Build Arms Control In A New Era”
Status: Open

On The XIII Convention Of Risa PIR Center Held The Expert Seminar “Elements Of The Strategic Equation: How To Build Arms Control In A New Era”

MOSCOW, OCTOBER 21, 2021. PIR PRESS. “For several years now, the international security situation has remained alarming, we even use the word“degrading”, and what is most worrisome is that the architecture of arms control has suffered most in recent years, mainly under the blows of those seeking to secure geopolitical domination, relying on strength. By this we mean, first of all, the United States”, – Alexander Trofimov, Head of the Department of Military-Strategic Problems of the DNKV of the Russian Foreign Ministry.

On October 14, PIR Center held an expert seminar “Elements of the Strategic Equation: How to Build Arms Control in a New Era” within the framework of the XIII Convention of the Russian International Studies Association (RISA). Among the participants are employees of the Russian Ministry of Foreign Affairs, IMEMO, ISKRAN, MGIMO, UrFU, PIR Center Advisory Board members, as well as students and teachers of regional universities. The discussion was moderated by Sergey Semenov, coordinator of PIR Center Nuclear Nonproliferation & Russia Program.

Vladimir Orlov, PIR Center Founder & Director, in his welcoming speech to the participants recalled that in 2017 a joint Russian-American project on strategic stability was launched, within the framework of which we and our American colleagues tried to find the ground for further bilateral dialogue in the field of control over armaments. “And it gives me special pleasure that our then developments are in tune with the Russian concept of the strategic equation, which presupposes taking into account all the factors influencing strategic stability”, – said Vladimir Orlov.

Oleg Krivolapov, Researcher at ISCRAN, addressed the USA’s place in the system of strategic stability with the topic of his report: “US Missile Defense: Impact on Strategic Stability, Development Prospects, Opportunities for Control” and Andrey Baklitsky, PIR Center Consultant, Senior Researcher of Center for Advanced American Studies IMI MGIMO Russian Foreign Ministry, having analyzed the US approaches to arms controlunder the administration of Republicans and Democrats.

Andrey Malov, PIR Center Advisory Board member, associate professor at the Diplomatic Academy of the Russian Foreign Ministry, drew attention to the impact of the militarization of outer space on strategic stability: “The arms race in outer space has not yet to begin, but there is a risk that it will start soon. A groundwork has been created for placing weapons in outer space. Space weapons are real-world weapons, not deterrents. It is capable of suddenly and covertly hitting targets”.

A detailed commentary was given by Vladimir Dvorkin, Doctor of Technical Sciences, Professor, Major General (retired), Chief Researcher at IMEMO RAN, PIR Center Advisory Board member: “Any equation must contain a function. This is not just strategic stability, but a state of strategic stability, indeed a state of balance. Further factors should follow in this equation, of which there can be a great variety. Each factor has an inherent coefficient showing the contribution. Equations can be linear, non-linear, of any order. In principle, it is possible to solve them, but, first of all, it is necessary to evaluate the initial conditions by factors, and by doctrinal guidelines for solving this equation”.

Sergey Semenov, coordinator of PIR Center Nuclear Nonproliferation & Russia Program, in his report “START as a Central Element of the Strategic Equation”, summarized that “Modernization of American strategic offensive weapons will not affect strategic parity, the return potentials of Russia and the United States will also remain at equal levels”.

Artem Kvartalnov, a master’s student at MGIMO of the Russian Ministry of Foreign Affairs, drew attention to the concept of a prompt global strike and its risks for strategic stability. More details about a comprehensive analysis of the development of the PGS concept since the 2000s can be found in the latest issue of the Security Index by the link.

The discussion was fruitful with questions and discussions. On the results of the expert seminar, a Security Index will be published based on the theses of the speakers.

For all questions related to the Nuclear Nonproliferation & Russia Program, you can contact the Program Coordinator Sergey Semenov by e-mail [email protected].