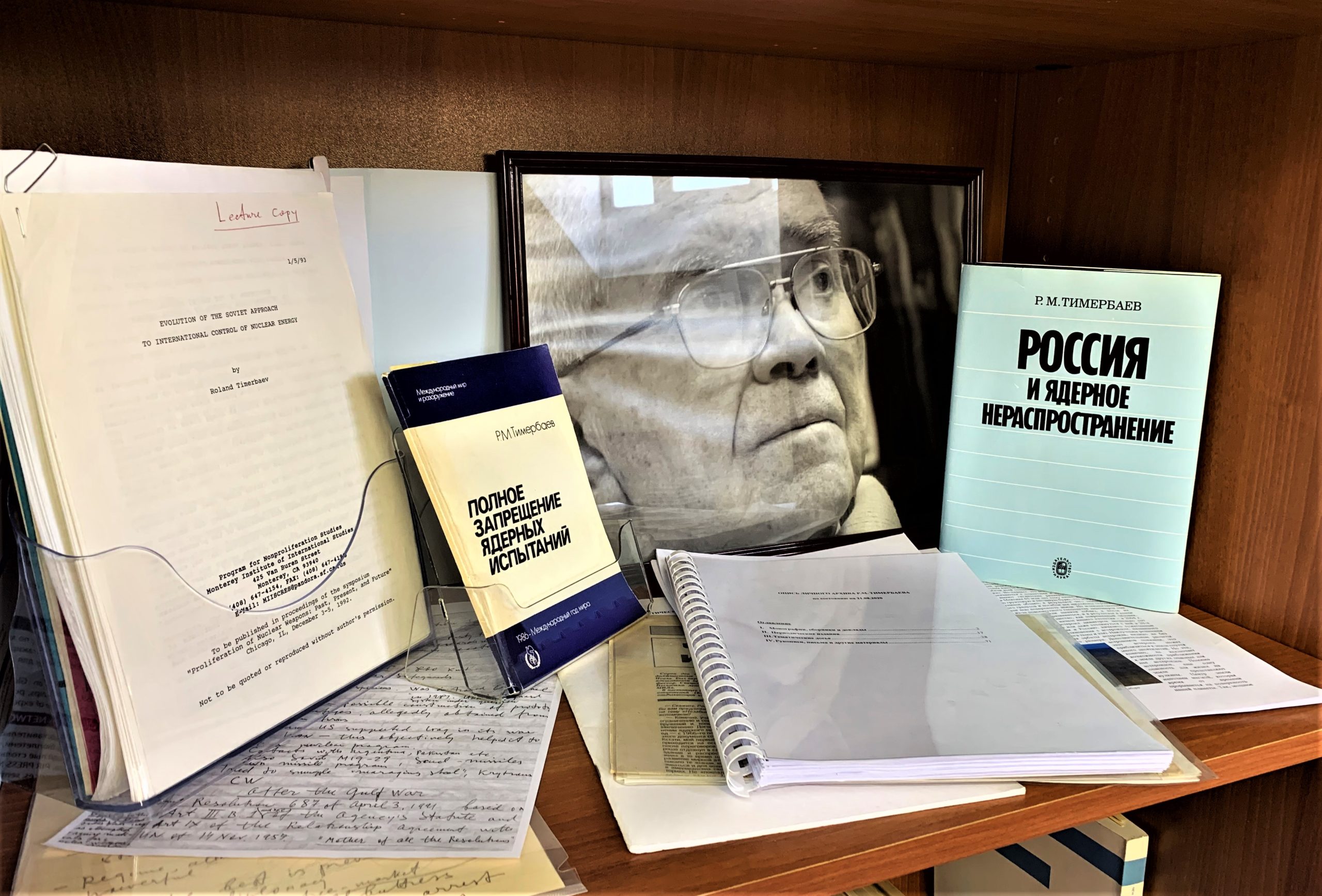 MOSCOW, APRIL 8, 2021. PIR PRESS. «Owing to the Archive of Ambassador Timerbaev, it was possible to establish once and for all the exact source, date and definition which many works on the WMD-free zone in the Middle East have referred to but have not indicated the source itself. So, with the help of the Archive, it was possible to prove that the USSR was one of the first countries to insist in a TASS statement on January 22, 1958, that the Middle East should and could become a peaceful area where there are not and should not be any nuclear and missile weapons…», ‒ Natalya Artemenkova, participant of the PIR Center International School on Global Security (2018), PIR Center intern (2018).

In the written legacy of Ambassador Timerbaev you can find countless official documents and diplomatic letters about the most important events stretching back to the 1950s and till nowadays. Some of them have changed the international legal approach to the problem of nuclear nonproliferation, contributed to the establishment of the main organizations and international regimes in the field of nuclear nonproliferation and arms control. Roland Timerbaev’s diplomatic and scientific efforts made the world more humane and safer for future generations. The scale of Ambassador Timerbaev’s activities is impressive; in his biography, we discover work on the preparation of major international documents regarding nuclear nonproliferation, such as the NPT and CTBT, participation in the workings of the respective UN committees, fruitful cooperation with the IAEA, the promotion of nuclear nonproliferation ideas in some regions, such as Latin America, the Middle East, the Korean Peninsula, South Asia, and fostering of Russia-US dialogue on strategic stability.

For a year and a half, PIR Center staff members and interns were fully involved in systematizing Ambassador Timerbaev’s Archive. Many junior research fellows, interns, and trainees of PIR Center were also engaged in this work. Among them are Nadezhda Kulibaba, Natalya Artemenkova, Yulia Katsenko, Evgeny Kholodnov, Konstantin Larionov, Lilia Zhulamanova, Artem Lomakin, Kirill Baginsky and Daria Kheyrie, Sergei Semenov, Nikita Degtyarev, Yulia Sych, and Elena Karnaukhova. Some of them were willing to convey their thoughts on the legacy of a person whom many of them acknowledge as a final authority and role model, an example of a true «non-proliferator» and a genuine patriot.

“As Roland Timerbaev once said, “We are just at the beginning of understanding and comprehending our nuclear past, and a lot of questions about nuclear history are to be properly answered before we can envisage our nuclear future.” He left behind a tremendous scientific legacy ‒ an invaluable archive of his works and reflections on the past, the study of which can really help us understand our nuclear future”, said Nikita Degtyarev, PIR Center Information& Publications Program Coordinator.

“I was not personally acquainted with Roland Timerbaev, but by a lucky coincidence, I happened to be involved in work on his Archive. It contained not only a large number of useful books on nuclear nonproliferation, such as the Collection of Basic Documents on Disarmament of the Russian Foreign Ministry but also many letters addressed to him personally, including letters directly from the UN. I realized how much respect and honor this distinguished person and outstanding diplomat enjoyed,” stated Yulia Katsenko, PIR Center Junior Research Fellow of the Nonproliferation & Russia Program (2020).

“While working in the Archive, I was wondering how books and documents from one’s library could become a reflection of a person. Working with materials, reading the notes on the margins, I seemed to have a quite personal conversation with their owner. What will my books say about me? Now I am getting my postgraduate degree and preparing a project work on Philosophical Aspects of the US and Russian Nuclear Programs. The choice of the topic seems to be directly influenced by the Archive. Roland Timerbaev had an amazing paper The Universe and Nuclear Weapons, in which he wrote, “It is believed that nuclear weapons were invented by people during the Second World War in order to ensure one’s victory, and then make it possible to achieve global supremacy. However, all people are a part of the universe, and the possibility of developing this «weapon» is inherent to the universe itself.” I read this work almost a year ago, and it never let me go,” said Nadezhda Kulibaba, PIR Center intern of the Nonproliferation & Russia Program (2020).

“Work in the Archive gave me a qualitatively new perception of Roland Timerbaev. He was a unique, fundamental, so to say, person. Steady analytical and diplomatic work in several directions could be traced on every page of the Archive’s materials. My activities in the Archive of Ambassador Timerbaev have become a unique school of life for me and an invaluable experience that will certainly help me in the future. I have used and am planning to do so further if there is such an opportunity, materials on the history of the American and Soviet nuclear projects for my research. Besides, it would be important for me to study a number of reports and materials from IAEA conferences on the verification of hypothetical nuclear programs in nuclear threshold states,” stated Artem Lomakin, PIR Center Education & Training Program intern.

“I remember that in literature lessons, we always began reading a piece of fiction with an acquaintance with its author. Without getting an insight into the Creator’s personality, it is almost impossible to understand his or her Creation. I could confidently compare my past literary experience with the work on the systematization of Ambassador Timerbaev’s Archive. At the very beginning of my PIR journey, before I delved into the world of nonproliferation, it was such an honor and a rare privilege to meet someone who was and remains a great figure in this professional world. Unfortunately, I did not get acquainted with Roland Timerbaev personally but got to know his personality ‒ through letters, notes, newspaper clippings with personal notes, unique documents and resolutions, drafts of speeches and articles. I hope and believe that this acquaintance will become an excellent stepping stone for my career in the nonproliferation community,” said Darya Kheyrie, PIR Center Education & Training Program trainee.

Reviewing the lengthy process of systematizing the Archive of Ambassador Timerbaev, Assistant to Director on Special Projects & Education and Training Program Coordinator Elena Karnaukhova noted, “For PIR Center, systemizing Roland Timerbaev’s Archive is a matter of high priority. He was a great thinker, diplomat, scientist, mentor, one of the biggest names in the realm of nonproliferation! Moreover, it is a great responsibility for all of us. We wanted to give the Archive a form in which it could become a guide for new generations, a guide for those people who now are responsible for preserving achievements in the field of nuclear nonproliferation, arms control, and strategic stability. Undoubtedly, considerable work has been completed, but there still remains so much to do so that Timerbaev’s legacy is properly organized and, more importantly, used. That is why PIR Center’s initiatives to hold the Timerbaev debates and launch Nonproliferation.ru / Nonproliferation.world educational platform are so relevant. As well as PIR Center’s work on Roland Timerbaev’s Archive, these projects are another means to manifest that the world obviously lacks such colossi of nonproliferation movement. PIR Center constantly tries to address this issue, promoting its educational and research projects in every possible way.”

Ambassador Timerbaev’s Archive is not only a treasure trove of knowledge about nonproliferation and disarmament. It is also something personal and memorable about the person who introduced to the world of nonproliferation and was a genuine mentor and friend. PIR Center Director Vladimir Orlov fondly recalls, “Personally I was most impressed by the acquaintance with the sections of Roland Timerbaev’s Archive that concern his Monterey period (the early 1990s). That is quite a personal thing, indeed: it was Roland Timerbaev who introduced me, led me by the hand, to Manhattan, to California … But when I open the Monterey archives of Timerbaev, it’s not so much my personal nostalgia as professional admiration for his productivity at that time, for how his thoughts flourished … The Nonproliferation Review magazine – now a classic of the genre – was established due to his perseverance. Analyzing the documents of the Archive of those years, we can see what kind of polyphony of genres he worked in during the Monterey period: here is the style of the Soviet ambassador, and the expertise of a Doctor of Sciences, and the political review he sent to Moscow … it was no coincidence that he soon received a high state award … And some documents are both topical and funny at the same time. When you work in Timerbaev’s Archive, every day is a real discovery. One day I was hooked on a letter to Professor Bill Potter from a senator in Delaware named Joseph Biden Jr. dated December 8, 1992. And a comment to this letter from Ambassador Timerbaev dated December 15 of the same year. And this is all about the nonproliferation of nuclear weapons.

Other researchers and I could find hundreds of equally interesting documents from the 1950s, 1980s, and 1990s in Ambassador Timerbaev’s Archive. If the PIR Center project to digitize Timerbaev’s Archive on the Nonproliferation.ru / Nonproliferation.world educational platform is supported – and I call on everyone who is committed to supporting historical accuracy in the field of Russian (Soviet) foreign policy and diplomacy to endorse this project – hundreds of unique Russian and English documents on nuclear nonproliferation history, arms control, and Russia-US relations will become available to every expert, scholar, student, and everybody interested all around the world.”

Ambassador Timerbaev became a source of inspiration and useful information for everyone who took part in the systematization of his Archive. Despite all the difficulties arisen, the participants think with joy and even gratitude that they are intimately connected to the legacy of the great mentor for all “non-proliferators”. Some of the participants were provided with such an opportunity due to their internship at PIR Center, which also brought junior experts on global security closer to their dream ‒ to become members of the highly qualified and professional nonproliferation community, which once involved Roland Timerbaev; and he is still an integral part of this community.