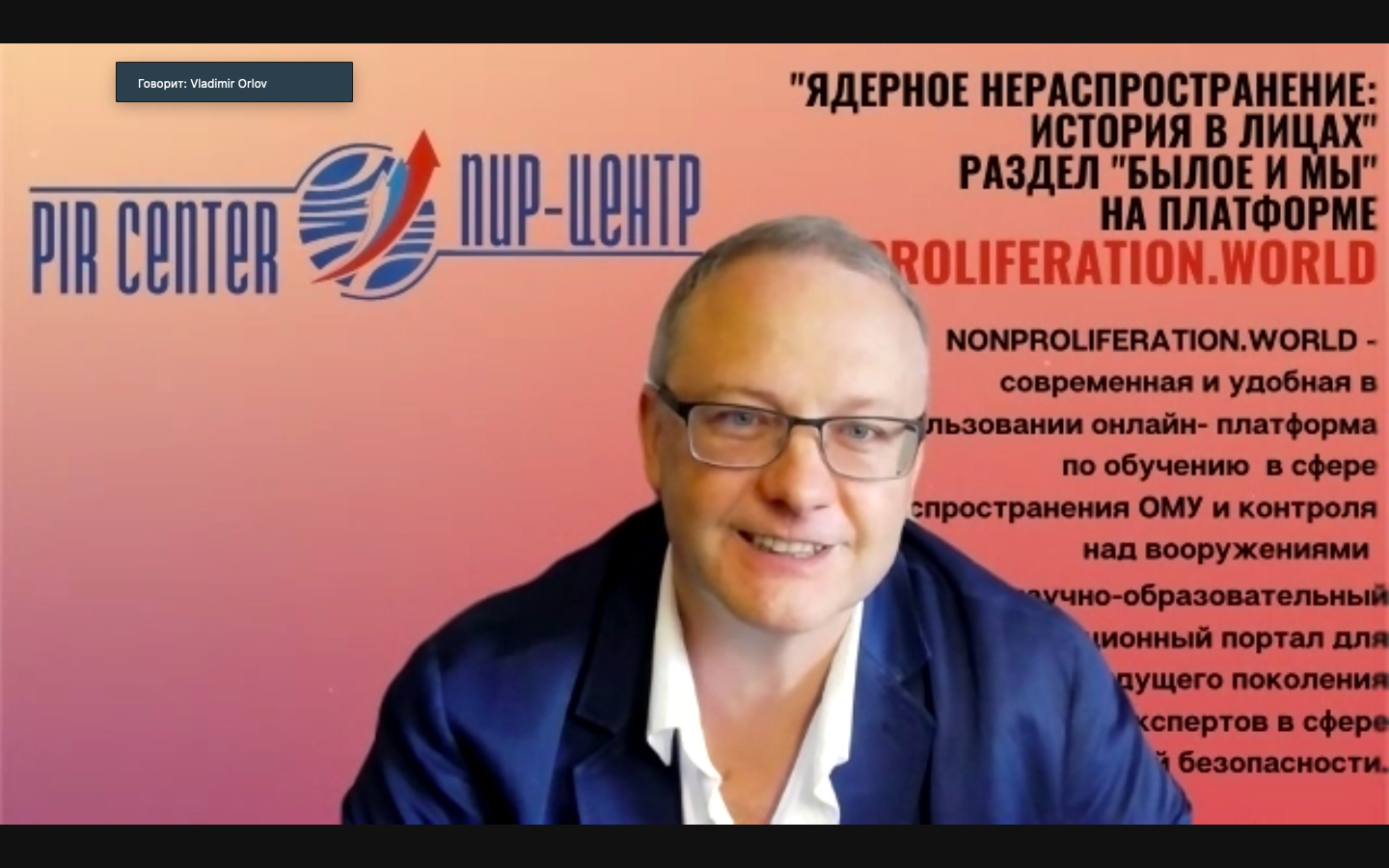 Main PIR Press News PIR Center Held A Webinar Dedicated To The Failure Of The 1991 Coup And The 30th Anniversary Of The Transition Of The Soviet Union’s Nuclear Weapons To Russia
Status: Open

MOSCOW. AUGUST 26, 2021. PIR-PRESS. “30 years ago, for six months, between August 1991 and January 1992, the process of transition of nuclear succession from the USSR to the Russian Federation took place. It was a painful and disturbing process, but in the end, it was peaceful and prosperous. I will tell you how it all started. I will tell you about the August days of 1991, about the failure of the coup. Moreover, I happened to spend 3 days and 2 nights of the coup in the White House at that time. And there to witness its collapse”, – Director and founder of the PIR Center Vladimir Orlov.

On August 19, the PIR Center held a webinar on the topic ” Putsch. Orlov. Eyewitness. 3 days and 2 nights in the White House. 30 years later.” Vladimir Orlov, the founder and director of the PIR Center, shared his memories and impressions about the events of the 1991 Soviet coup d’état attempt, who was in the White House from August 19 to August 21, 1991, as a correspondent for the then most influential newspaper “Moskovskie Novosti”. This event was a harbinger of the launch of a new project of the PIR Center “Nuclear Nonproliferation: history in faces”.

Vladimir Orlov recalled that, in addition to the 30th anniversary of the failure of the coup, this year we remember the 30th anniversary of the transition of nuclear weapons from the USSR to Russia. He told how the “nuclear briefcase” was transferred from Mikhail Gorbachev to Boris Yeltsin, what was the nuclear arsenal and control over it on the territory of Russia, Ukraine, Belarus and Kazakhstan, as well as what options existed for the transfer of nuclear weapons after the collapse of the Soviet Union.

At the time of the August Coup, Vladimir Orlov was only 22 years old. He only gave up his diplomatic career in order to engage in journalism on topical issues of the day. It is also worth recalling that the newspaper “Moskovskie Novosti”, in which he worked, was extremely critical of the last years of Mikhail Gorbachev’s rule and openly supported Boris Yeltsin. Vladimir Orlov told how on the first day of the coup he urgently had to get from the Moscow region to the White House on the same bus with the “winners” officials, how he spent 3 days and 2 nights inside in the epicenter of events, as well as about the tanks that arrived without warheads, about a huge crowd of 700,000 people who chanted: “Freedom or death!”, about the upcoming assault and the atmosphere inside the White House. You can get acquainted in detail with the publications of Vladimir Orlov about the August events prepared for the Moscow News and other publishers on his personal website.

The participants of the webinar had the opportunity to ask Vladimir Orlov their questions. They were interested in questions of everyday life in the besieged White House and what it was like to be in the White House building for 3 days, about the creation of a reserve capital in Sverdlovsk in case of a coup victory in Moscow, the reasons for the coup, how these events affected the worldview, which flag Vladimir Orlov likes best-red or tricolor, the possibility of using nuclear weapons in August 1991, etc.

The PIR Center webinar was attended by both those who remember the events of August 1991 firsthand, who then ensured the safety and security of the nuclear arsenal, and young people – the generation for whom the events described by Vladimir Orlov are already a distant history. The webinar was also attended by representatives of diplomatic missions in Russia, in particular, diplomats from the Philippines, Finland, and Switzerland. Among others, the webinar was attended by a member of the PIR Center Council, Colonel General Yevgeny Maslin, General Director of the International Center for Uranium Enrichment JSC Gleb Efremov, a leading researcher at the Center for North American Studies of the IMEMO RAS Elina Kirichenko, a member of the Expert Council of the PIR Center , Ambassador Mikhail Lysenko, Deputy Dean for Research, Associate Professor of the Department of International Security at the Faculty of World Politics of Lomonosov Moscow State University Anastasia Ponamareva and many others.

The event caused a lively response from the audience present. Sergey Sebekin, Candidate of Historical Sciences, lecturer of the Department of Political Science, History and Regional Studies of Irkutsk State University, commented on his impressions of the webinar as follows: “I always take part in various webinars held by the PIR Center with great interest. However, this webinar was unique – it stands out from a number of events of the PIR Center in that it was not devoted to modern problems of global security (which we are so used to), but made an excursion into history, consecrated the problems of personal security – financial, political, which were so relevant for a person at that time. The events of August 1991 can hardly leave anyone indifferent – this is a change of epochs, a bifurcation point, a global shock, behind which sometimes you can not see the “ordinary” person, his personal problems and experiences due to the changes taking place. In this regard, the most interesting was the story of the “resident” of those events – Vladimir Andreevich Orlov, who is now an authoritative expert in the field of nuclear non-proliferation, and then was still an ordinary young man who, having not had time to enter the labor path, was thrown into the thick of events with his head by the will of fate.”

A 3rd-year student of the Faculty of International Relations of the MGIMO Ministry of Foreign Affairs of Russia, Alexandra Zubenko, also shared her impressions: “I remember that at school, when I was preparing for the history exams, the 90s was one of the most incomprehensible periods for me, it was very difficult to read about it from history textbooks. Until some time, he remained for me a” white spot “of our history, and every time I started reading on the Internet about the coup, about the shooting of the White House, about Gaidar’s reforms or something else, it seemed that my “puzzle” was not fully formed. It seems to me that such webinars are just needed to help young people find the missing links in the logic of those events. The 90s are the period that today’s generation should pay special attention to, because our future may depend on how we learn its lessons.”

The recording of the webinar is available on the PIR Center’s YouTube channel via the link, and will also be available on our educational platform Nonproliferation.World in the “It was and we” section. In the period from October to December this year, the PIR Center will continue a series of events dedicated to the 30th anniversary of the nuclear succession of the Russian Federation. Follow the announcements on our website and on social networks.

You can send your questions about the events of the PIR Center, the project “Nuclear Nonproliferation: history in faces”, the educational platform Nonproliferation.World to [email protected].