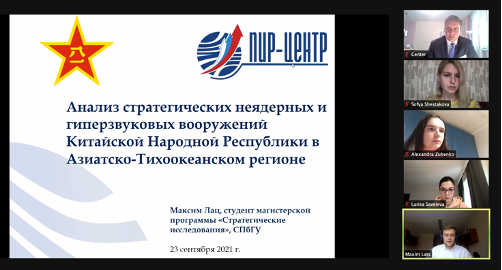 Main PIR Press News Prospects For The Development Of The Chinese Weapons Were Discussed At The PIR Center Midweek Brainstorming Session
Status: Open

MOSCOW, September 29, 2021. PIR Press. “Our American colleagues tried to convince us that China still poses a threat to Russia’s security interests. So, we had an idea to take a look from the Russian side, make an independent assessment of the Chinese potential in order to better understand what influence the PRC has on strategic stability and what prospects this could open for Russian-Chinese cooperation”, – Sergey Semenov, coordinator of the PIR Center Nuclear Nonproliferation & Russia Program.

On September 23, PIR Center held a workshop within the framework of the Midweek Brainstorming sessions series “Analysis of strategic non-nuclear and hypersonic weapons of the People’s Republic of China in the Asia-Pacific region”. The defense was presented by the research work of Maxim Lats, a master’s degree student at St. Petersburg State University, prepared following the results of a five-month internship at the PIR Center.

Based on a wealth of factual material, the paper presents an analysis of the consequences of the development and deployment of China’s strategic non-nuclear and hypersonic weapons, with particular emphasis on the potential US response.

PIR Center Founder & Director Vladimir Orlov welcomed the participants, drawing their attention to the fact that “The development of the Chinese potential of strategic forces requires special attention from us [Russia] as a partner and neighbor”. He also pointed out that there is a necessity for a more thorough and expert dialogue, which should be carried out both within the PIR Center and with our Chinese partners. In this regard, Vladimir Andreevich announced future PIR Center projects related to the problems of Chinese nuclear weapons.

Maxim Lats began his speech with the increasing urgency of studying the development of PRC weapons. The People’s Republic of China is investing more and more funds in the development of R&D, which is reflected in the development of new strategic non-nuclear and hypersonic weapons. Maxim Petrovich noted the importance of this topic due to the fact that China affects strategic stability, regional and international security, and the Asia-Pacific region is the most likely theater of operations, which can be influenced by the latest weapons in non-nuclear equipment. Among the hypersonic weapons of China, Maxim Lats singled out the following:

The interests of Russia as a significant player in the region and strategic partner of the PRC were also emphasized. However, it was noted that Russia remains the leader in the field of hypersonic weapons. Concluding his speech, Maksim Petrovich summed up that China will actively develop strategic deterrence tools to counter missile defense and the island chain.

The speech of Maxim Lats caused interest among the audience: there were both detailed expert comments and controversial issues. During the discussion, the possibility of a tripartite arms control architecture with the participation of the Russian Federation, China, and the United States, as well as the issues of maintaining existing mechanisms to counter the spread of rocket technologies, such as RKRT, were discussed.

Based on the results of a workshop within the framework of the Midweek Brainstorming sessions series, the work was accepted for publication in the Security Index.

The recording of the event can be watched via the link.