I consider our meeting today to be of great importance. I am curious to know what young specialists in the field of nuclear nonproliferation, disarmament and strategic stability are interested in. I would like to tell you that it is crucial to maintain a dialogue, and I urge you not to break it off no matter what happens on the international arena. We, Russia and the United States, are the two largest nuclear states. Whether we like it or not, we have to cooperate with each other to promote global security. Love your Motherland wherever you were born, never betray its national interests, but do not neglect the opportunity to maintain constructive relations even with the countries which take different positions with regard to the international agenda 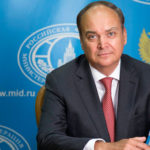 H.E. Anatoly Antonov
Ambassador Extraordinary and Plenipotentiary of the Russian Federation to the United States

On November 5, 2022, the students of the International Dual Degree M.A. Program Global Security, Nuclear Policy and WMD Nonproliferation, developed jointly by PIR Center, MGIMO University and Middlebury Institute of International Studies in Monterey (MIIS), USA, met with H.E. Anatoly Antonov, Ambassador Extraordinary and Plenipotentiary of the Russian Federation to the USA. The meeting took place in the format of lunch in Monterey, California, where Anatoly Antonov arrived earlier for a working visit. Young specialists studying nuclear nonproliferation, disarmament, international terrorism and global security in general, as well as young interpreters from Russia, the United States and Armenia also took part in the lunch.

During the meeting the students discussed with H.E. Anatoly Antonov the negotiations on the Treaty on Measures for the Further Reduction and Limitation of Strategic Offensive Arms (New START), in which H.E. Anatoly Antonov participated as the head of the Russian delegation, as well as his vision on the development of the future arms control regime and the perspective for the involvement of China, France and the United Kingdom in the negotiation process. Attention was also paid to the difficulties in maintaining a dialogue between Russia and the United States on the key issues of the international agenda. The students shared their impressions of their studies in the United States, especially against the background of the aggravation of the international situation, and also touched upon the most interesting questions taking into account their specialization. Galina Salnikova, student of the Dual-Degree M.A. Program in Nonproliferation Studies (MGIMO-MIIS-PIR Center), underlined: «The meeting with Ambassador Antonov was necessary for us Russian students who are having a hard time away from home. His moral support and interesting stories about the everyday life of a Russian diplomat reminded me that we are not alone in this difficult situation».

The meeting took place in a warm and friendly atmosphere of lively and open communication. Following the informal meeting Mark Myers, student of the Dual-Degree M.A. Program in Nonproliferation Studies (MGIMO-MIIS-PIR Center), noted, “I enjoyed my meeting with the Russian Ambassador to the United States. I appreciated his frankness regarding the Russian Federation’s positions on several critical issues in international politics”.

PIR Center is pleased to share the impressions of some of the participants of the lunch.

“The meeting with the legendary Ambassador Antonov made it possible to raise pressing issues and learn firsthand the position of the Russian Federation. It was of great interest to me to hear the opinion of such a distinguished diplomat on the topic of probable control of nonstrategic nuclear arsenals, as well as on what relevant arms control proposals the US previously transmitted and is transmitting again in the current environment”, — Vasily Tuganov, student of the M.A. Program Nonproliferation and Terrorism Studies (MIIS).

“From the moment I was informed that there would be an opportunity to meet with Anatoly Antonov,I was waiting impatiently for this meeting because for me it is, first of all, a sign that shows that our country represented by the Russian Government is interested in its citizens who are now abroad. I think it is a sign of concern in the today’s difficult geopolitical situation, especially when the media block alternative points of view on the current international environment. I liked the fact that Anatoly Antonov was open to discussion, answered our questions and showed interest. He talked to us longer than it had been planned. I think this shows respect and care for us. Thank you very much!” — Olga Stevens, student of the M.A. Program Conference Interpretation (MIIS).

“The meeting with Ambassador Antonov took place at a critical juncture. The Ambassador outlined valuable guidance for our career and professional paths. Thank you for this mature and professional discussion”, — Daria Kheyrie, student of the Dual-Degree M.A. Program in Nonproliferation Studies (MGIMO-MIIS-PIR Center).

“The meeting with the Russian Ambassador to the United States, Anatoly Antonov, was a unique opportunity for us to ask the most pressing questions about the prospects for the Russian-American strategic dialogue. Also, Anatoly Antonov shared his personal experience of diplomatic work and gave us valuable advice on building a professional path in the field of international relations. Thank you, Ambassador Anatoly Antonov, for the sincere and open dialogue with all the students who participated in the meeting”, — Alexandra Aladko, student of the Dual-Degree M.A. Program in Nonproliferation Studies (MGIMO-MIIS-PIR Center).

“I was very pleased to meet with the students. Our lunch was a great opportunity to better understand the thoughts and ideas of the younger generation of specialists in nuclear nonproliferation, arms control, disarmament, and their fellow interpreters. I sincerely wish them all success and prosperity, and to the Dual-Degree M.A. Program Global Security, Nuclear Policy, WMD Nonproliferation, which is implemented in cooperation by the leading Russian-American educational institutions [MGIMO, MIIS, PIR Center], I wish you as many new students as possible that are keen on the nuclear factor in international relations. On my part, I am ready to provide them with all possible assistance and support”, — H.E. Anatoly Antonov summed up the meeting.

International Dual Degree M.A. Program Global Security, Nuclear Policy and WMD Nonproliferation has been developed by PIR Center, MGIMO University and Middlebury Institute of International Studies in Monterey (MIIS), USA, since 2015 when the documents on its establishment were signed. The first intake of students already took place in 2016. In 2021, the Program crossed its five-year milestone. Over the years of the Program implementation, more than 40 people received qualifications in nuclear nonproliferation, disarmament, and global security. Five cohorts of students graduated from the Program, including students from Spain, Ireland, Canada, China, Mexico, the Republic of Korea, Russia, and the USA.

A unique feature of the Dual Degree Program in Nonproliferation is that its graduates are awarded two master’s degrees: one from MIIS with a degree in Nonproliferation and Terrorism Studies and the other from MGIMO with a degree in International Affairs. Students study not only WMD nonproliferation, nuclear energy and arms control, but also courses in the theory and history of international relations and courses aimed at mastering methods of political analysis. Supported by PIR Center students regularly participate in extracurricular activities, meet with experts in the field of nuclear nonproliferation and global security, and visit various Russian official agencies and specialized organizations.

Questions regarding education process and admission to the Dual Degree M.A. Program “Global Security, Nuclear Policy and WMD Nonproliferation” can be sent to edu@pircenter.org.