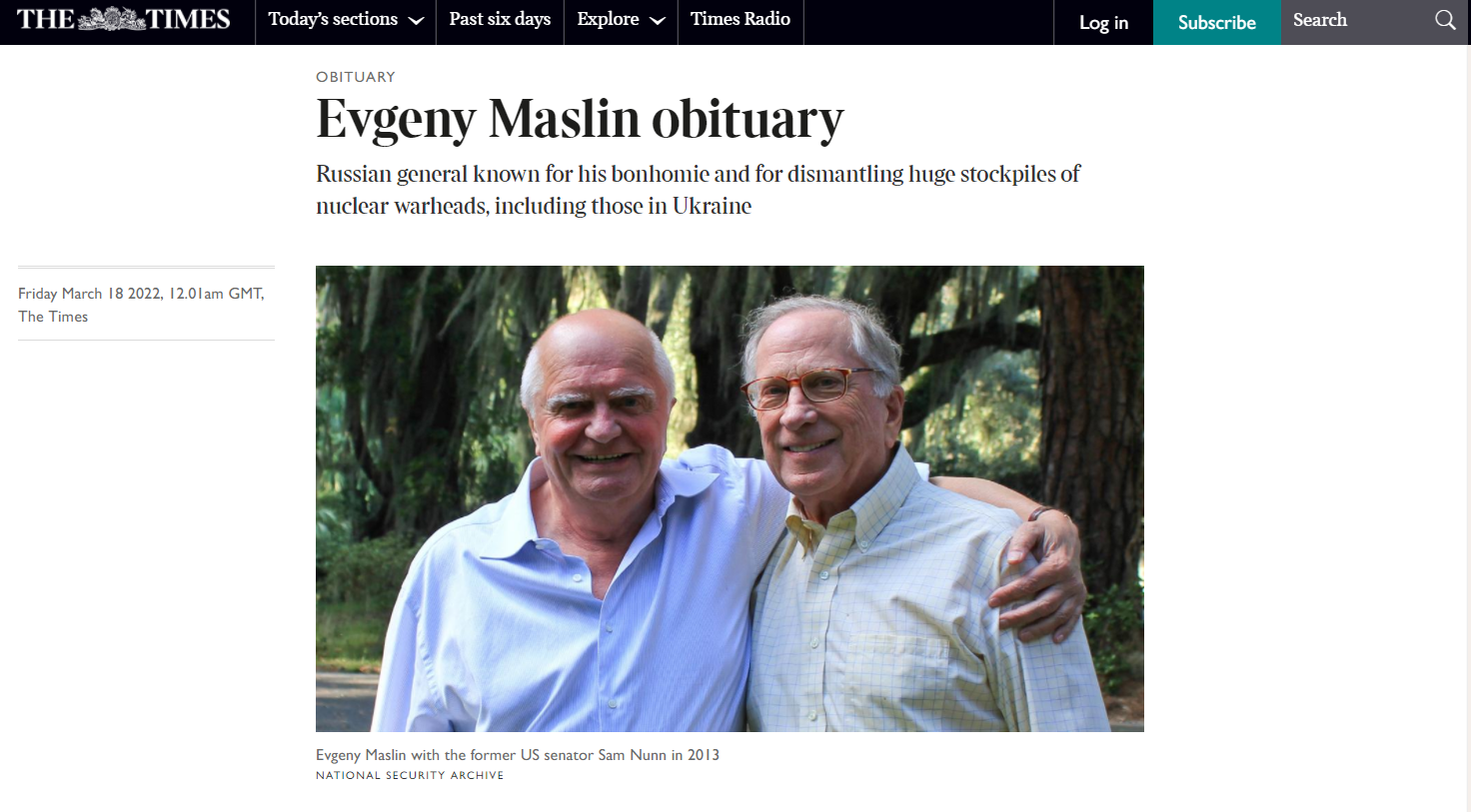 Main PIR Press News Russian General Known For His Bonhomie And For Dismantling Huge Stockpiles Of Nuclear Warheads, Including Those In Ukraine — The Times
Status: Open

Russian General Known For His Bonhomie And For Dismantling Huge Stockpiles Of Nuclear Warheads, Including Those In Ukraine — The Times

The role of Evgeny Petrovich Maslin was so outstanding and significant that even during the period of unprecedented sanctions and the cooling of relations between Russia and the West, leading American and European media publish obituaries about the Russian general. This time, the British newspaper The Times published an article dedicated to a member of PIR Center Executive Board, colonel general Evgeny Petrovich Maslin:

“Part of Maslin’s challenge was to persuade Ukraine, Belarus and Kazakhstan to hand over or destroy the nuclear weapons they had inherited from the Soviet state. He urged Russian disarmament too, helping secure agreements with the US whereby at one stage 2000 warheads a year were being destroyed. His plan was to bring all the weapons not being destroyed back into Russia where he believed safeguards against accident or theft were stronger.

Maslin worked out what he needed and appealed for international help, especially to the US. He persuaded doubters in the Russian government that ‘we need it for our own security, not to please Americans but to guarantee the security of the nuclear arsenal around the country’. The countries of the former USSR, he pointed out, lacked specialist transport and storage containers for fissile materials, and damage control equipment for any nuclear accidents.  Poor pay and living conditions for military specialists and civilian personnel supposedly looking after the weapons were also a continuing problem, he argued.

His assessments and appeals were persuasive. Maslin developed especially close collaboration with US politicians and officials through the so-called Nunn-Lugar programme, initiated by two US senators. Finance and specialist technical help and equipment was provided to help implement Maslin’s plans, including bullet-proof blankets for transporting weapons, high security fencing for safer storage and technology to help keep strict inventories.

It was all, Maslin believed, a vital part of post-Cold War confidence-building. Such co-operation – as well as help from other countries including the UK, France and Italy – ‘strengthens security and transparency in the disarmament effort’ he said. ‘The whole world also benefits from greater confidence in the future and expanded cooperation in other fields’.

Famous for his bonhomie, he enhanced that mood of goodwill by conversing with his international colleagues about his love of chess, art and literature (Kipling was a favourite)  or indulging his love of wine and cognac. He also regularly broke into song, including ballads about the ‘Great Patriotic War’ against Nazi Germany. He like to see the Russian-US co-operation on the safety of nuclear weapons in the 1990s as comparable to the military and economic cooperation between Moscow and Washington during World War Two.”