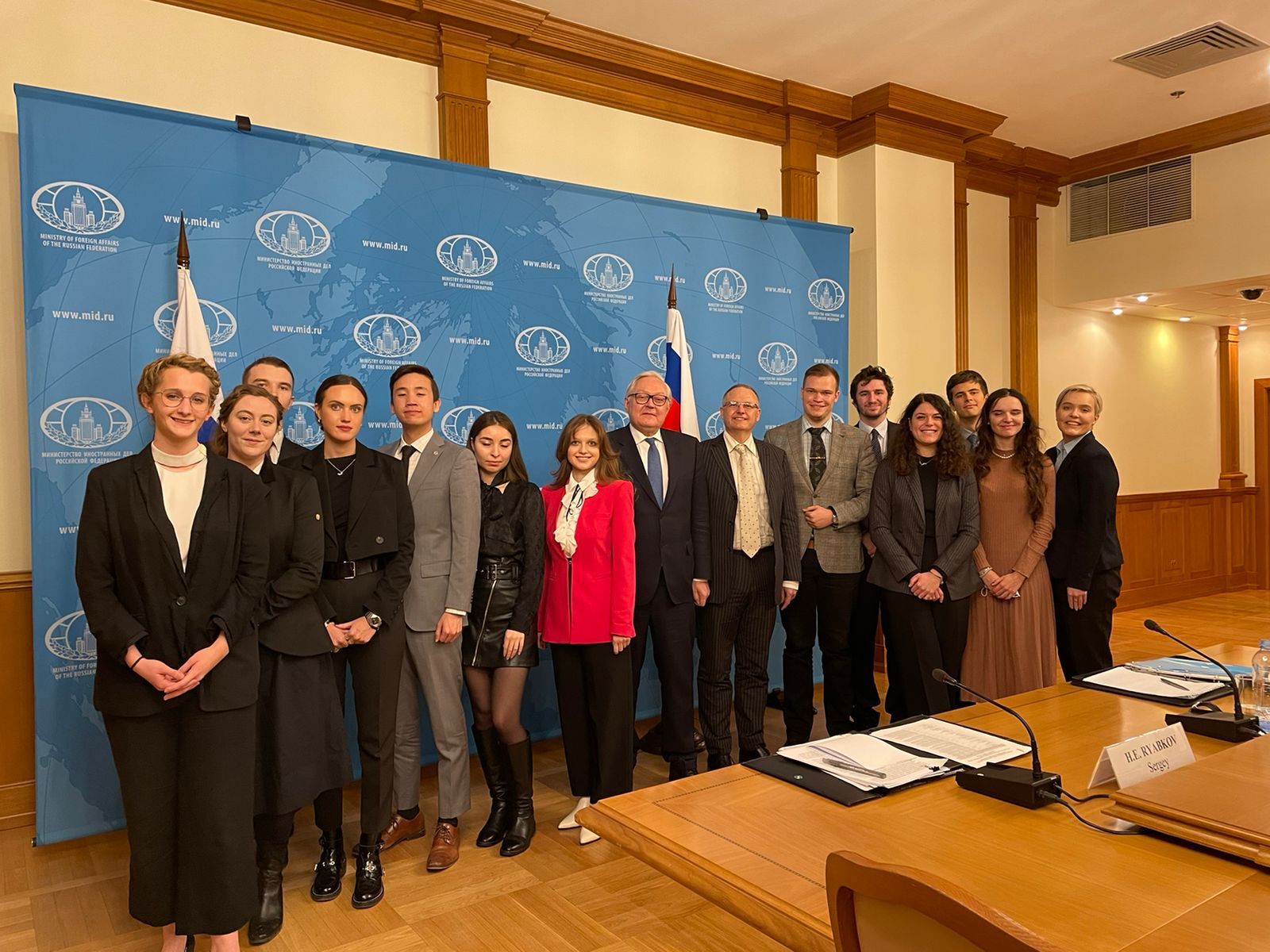 MOSCOW. DECEMBER 1, 2021. PIR PRESS. “So many “trips” during these one and a half hours of the meeting: to Iran, with its nuclear program; and Washington, on the eve of the Putin-Biden virtual summit; and to Vienna, where the nuclear test ban convention will not come into force in any way and someone’s nerves may not stand; and to the Korean Peninsula, where nuclear weapons and missiles are; and even to Rarotonga Island – and don’t ask why (spoiler: AUCUS). And all this was in a spacious hall at the Smolenskaya-Sennaya of the Ministry of Foreign Affairs of Russia, where H.E. Deputy Foreign Minister Sergey Ryabkov kindly, patiently, in detail answered questions from young specialists – students of the Dual Degree M.A. Program Global Security, Nuclear Policy, and WMD Nonproliferation (developed by PIR Center, the Middlebury Institute of International Studies in Monterey, USA, and MGIMO University), from the USA, France, Italy, Russia, as well as PIR Center junior research staff. The main part of the conversation will remain behind the scenes. I have no doubt that young specialists will have something to remember. And substantive talks. And the atmosphere is open and kind-hearted. Such annual meetings have already become a strong tradition! And I was doubly pleased to see that in the hall, in addition to current students, there were also graduates of our Program – who are now baking “nuclear pies” in the Russian Foreign Ministry”, – Vladimir Orlov, Founder & Director of PIR Center.

The meeting was held in the Ministry of Foreign Affairs of the Russian Federation in accordance with Chatham House Rule. Participants discussed with H.E. Sergey Ryabkov the Russian policy in the field of nuclear nonproliferation and global strategic stability.

Some of the participants shared their feedback on the meeting with H.E. Deputy Foreign Minister Sergey Ryabkov.

“The meeting with H.E. Sergey Ryabkov really became a unique opportunity for all students of my master’s Program! We were able not only to hear firsthand the official position of Russia on topical issues in the field of nonproliferation and global strategic stability but also to personally ask clarifying questions to H.E. Deputy Foreign Minister. During the Q&A session, it was impossible not to note that the students were most interested in the prospects for the development of the Russian-American relations, as well as the resumption of negotiations on the Iranian nuclear deal at the end of this month.  It is very pleasant to understand that the Russian Foreign Ministry is really interested in forming a new generation of experts in the field of nonproliferation and provides an opportunity to hold such meetings on a regular basis, even taking into account all the circumstances of a difficult epidemiological situation. I would like to sincerely thank Dr. Vladimir Orlov and all the staff members of PIR Center, thanks to whom this memorable event was able to take place within the walls of the Department of Information and Press of the Russian MFA”, – Alexandra Aladko, student of the Dual Degree M.A. Program in Nonproliferation Studies.

“Having the opportunity to meet Deputy Foreign Minister Sergey A. Ryabkov was an honor and a pleasure. He openly expressed his concerns on the future obstacles of Russian Foreign Policy and answered our questions about arms control and the international nonproliferation and disarmament regime. This meeting allowed me to broaden my understanding of today’s world situation above my Italian and European perspectives. It was even more stimulating than I imagined!”, – Rebecca Pantani, student of the Dual Degree M.A. Program in Nonproliferation Studies.

“Our meeting with Deputy Foreign Minister of the Russian Federation H.E. Sergey Ryabkov was instructive and enriching. As soon as we – students – arrived at the Ministry of Foreign Affairs, we could not help but feel intimidated and out of space to meet such a character in Russia’s foreign and security policies. His Excellency exhaustively presented Russia’s priorities and perceptions regarding the nuclear Non-proliferation regime and arms control initiatives. We are thankful, Deputy Foreign Minister Ryabkov answered our questions with honesty. Our generation could only agree to his Excellency call for creative diplomacy and talks”, – Océane Van Geluwe, student of the Dual Degree M.A. Program in Nonproliferation Studies.

“I am glad to have the opportunity provided by PIR Center to meet with a leading world-class diplomat, Sergey Ryabkov. It is very useful for a future career and – in principle – for the most complete understanding of the present to communicate and talk with the powerful of this world and see them live. This is a truly valuable, irreplaceable experience!”, – Daniil Rastegaev, PIR Center’s Information & Publications Program trainee.