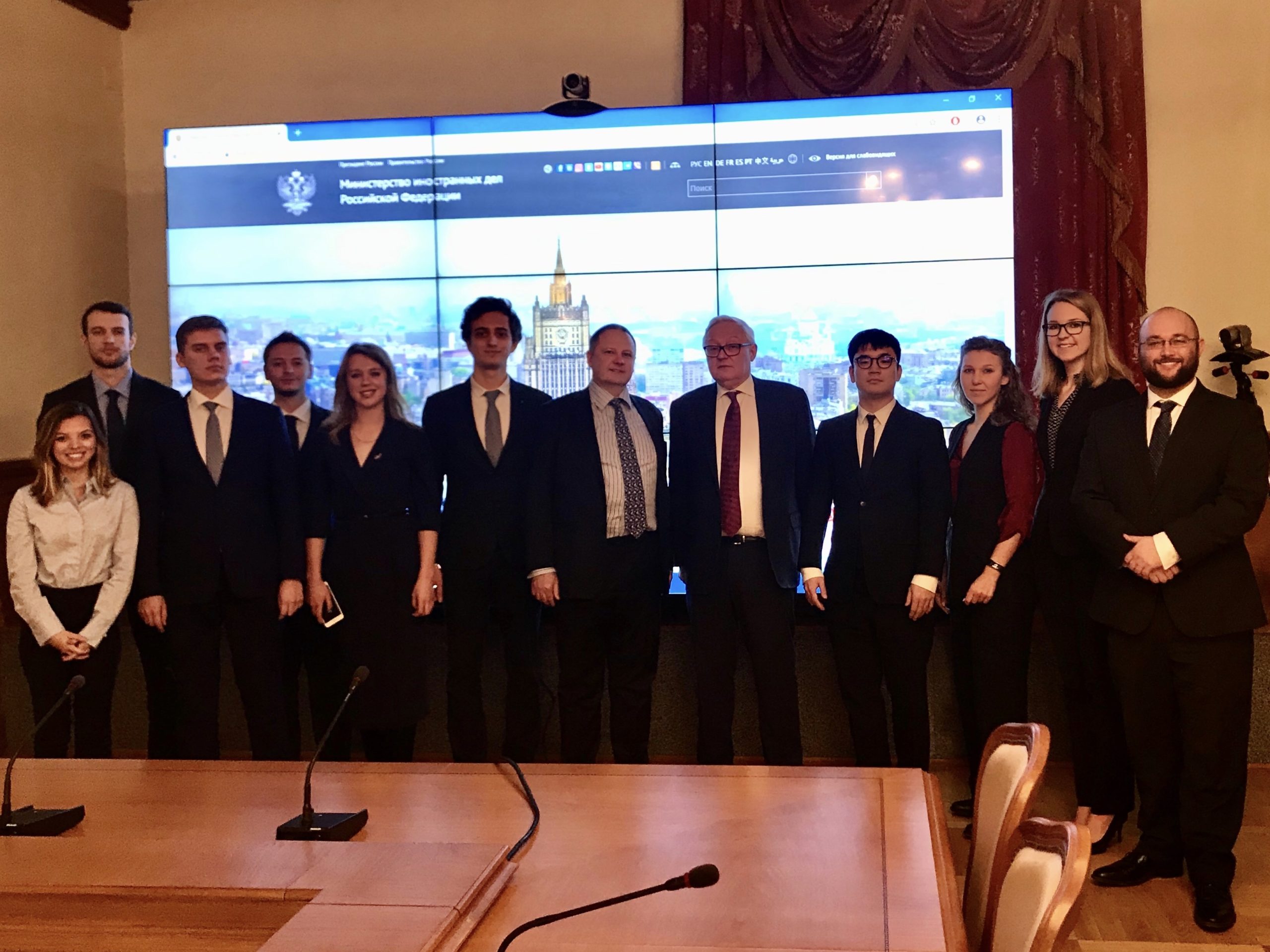 MOSCOW, DECEMBER 9, 2019. PIR PRESS – “Russian vision and decisions on the issues of arms control, disarmament and nonproliferation remain very pragmatic. We do not feel constrained by traditional formats and diplomatic protocol. On the contrary, we strongly believe that they are the best way to resolve the issues of today and probably of tomorrow”, – Sergey Ryabkov, Deputy Minister of Foreign Affairs of the Russian Federation.

On December 4, 2019, students of the Dual Degree Master’s Program in Nonproliferation Studies (MGIMO-PIR Center-Middlebury Institute of International Studies at Monterey) together with PIR Center Director Vladimir Orlov and Educational Program Director of PIR Center Yulia Sych visited the Ministry of Foreign Affairs of the Russian Federation.

Students had an opportunity to meet with Deputy Minister of Foreign Affairs of Russia Sergey Ryabkov during the visit. The meeting was devoted to a wide range of issues of nonproliferation, arms control and strategic stability with a focus on Russian approaches to and vision of global security issues.

Addressing the students, the Deputy Minister noted that Russia adheres to the traditional formats of interaction with partners aimed at stimulating professional discussions and achieving substantive results. Sergei Ryabkov said: “We do not see advancing arms control, disarmament and nonproliferation as a goal itself. For us, this is one of the means to assure Russia’s national security, and the Foreign Policy Concept of the Russian Federation, dated back to 2016, specifically emphasizes this particular function of Russia`s diplomacy.” The Deputy Minister clarified that the concept of increased and undiminished security for all is also reflected in the NPT Review Process.

“Our long-standing experience lets us conclude that smart and honest diplomacy can achieve many things. Sometimes it can succeed even without using “neither a canon nor a ruble,” the Deputy Minister quoted the poem of the Russian poet and diplomat Fedor Tyutchev, emphasizing that although this formula dates back to the 19th century, it still remains relevant and fully applicable today, when military build-ups and deployments are often considered to be an efficient step of resolving outstanding issues, and when ideas like peace through strength or strong powers competition are becoming alarmingly popular in certain parts of the world. “This is disturbing because all previous attempts to achieve peace through strength have failed and competition is hardly an appropriate base of building strategic stability”.

After his speech, Sergey Ryabkov answered students’ questions about the prospects for Russian-American cooperation after the US withdrawal from the Intermediate-Range Nuclear Forces Treaty (INF Treaty), the future of the New START, challenges to the NPT Review Process, the results of the Conference on the Establishment of a Middle East Zone Free of Nuclear Weapons and Other Weapons of Mass Destruction.

At the conclusion of the discussion, the Deputy Minister wished the students good luck in continuing their studies and expressed hope that during their stay in Moscow they would not only gain new knowledge but also make new friends.

After the meeting, a guided tour at MFA’s Headquarter was organized, as well as a visit to the Center for the History of the Russian Diplomatic Service, during which the students learned about establishment and development of the Russian diplomatic service from the time of Ivan the Terrible to the present day.

You can learn more about Educational Projects by contacting the PIR Center Educational Program Director Yulia Sych by phone +7 (495) 987 19 15 or by e-mail sych@pircenter.org.