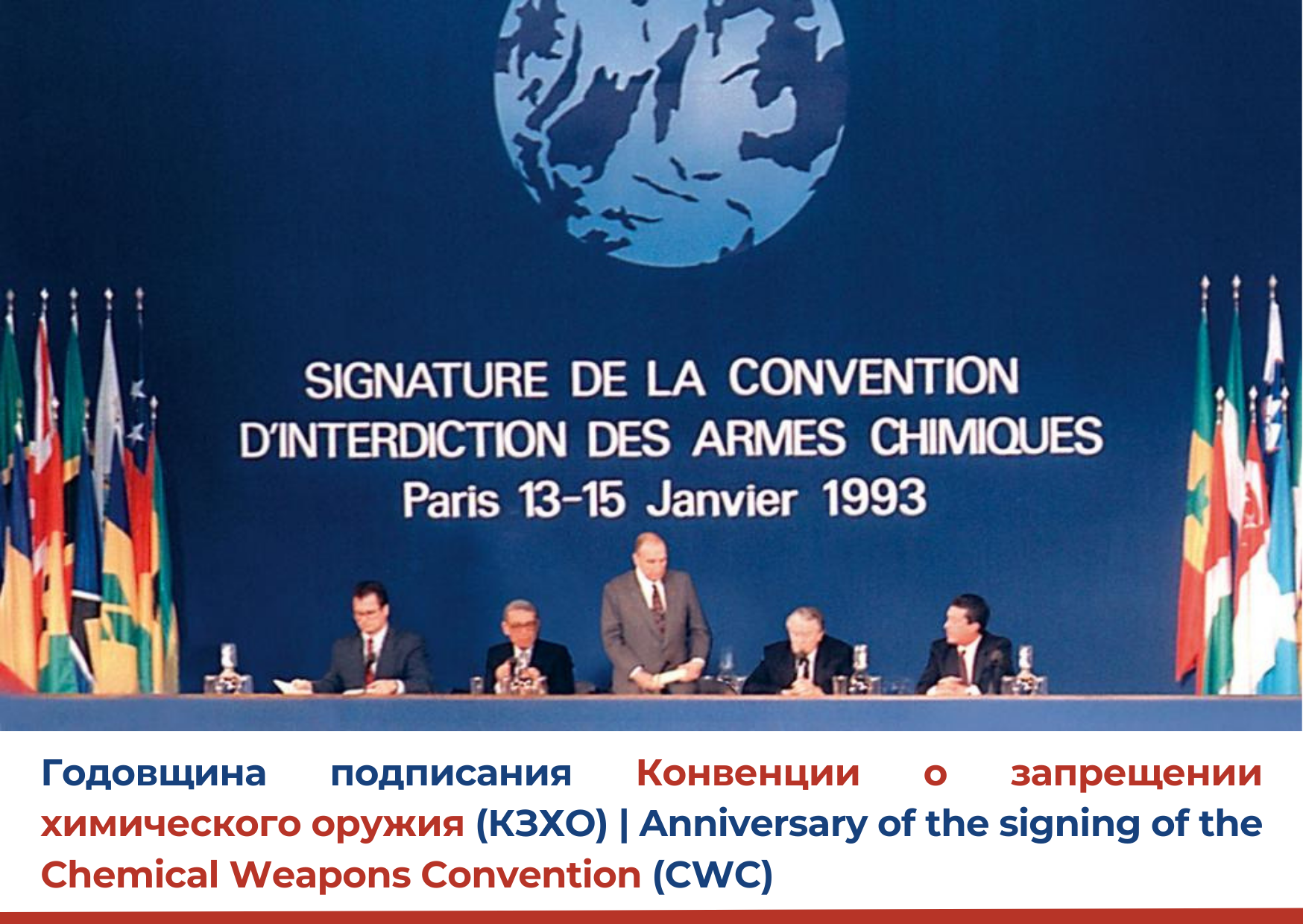 The Chemical Weapons Convention Was Signed 29 Years Ago

On January 13, 1993, the Convention on the Prohibition of the Development, Production, Stockpiling and Use of Chemical Weapons and on Their Destruction was signed (also known as Chemical Weapons Convention, CWC). According to Art. I, States Parties are obliged not to develop, produce, or use chemical weapons, not to carry out military preparations for their use; to destroy all chemical weapons in their possession or abandoned by them on the territory of another State Party; destroy any facilities producing such weapons, and not use riot control chemicals as a weapon of war. For more information, see the original text of the Convention on the OPCW’s website.

The idea of creating a chemical weapons convention originated in the late 1960s on the sidelines of the meeting of the Eighteen States Committee on Disarmament (later the Conference on Disarmament). The idea of studying the consequences of the possible use of chemical weapons was supported by the UN Secretary-General and the UN General Assembly. Discussion of the issue of chemical weapons also took place within the bilateral Soviet-American working group created in the late 1970s, and on September 23, 1989, the USSR and the United States signed a Memorandum of Understanding on a bilateral experiment on control and exchange of data in connection with the prohibition of chemical weapons (Wyoming Memorandum). This and other bilateral and multilateral agreements ultimately led to the conclusion of the CWC. For more information on the history of the CWC and the creation of the OPCW, see PIR Center’s historical analysis here.

The mandate of the Organization for the Prohibition of Chemical Weapons (OPCW) is governed by Art. VII and VIII of the Convention. In particular, the cooperation of the States Parties with the OPCW is carried out through the relevant National Authority, which informs the Organization about the legislative and administrative measures taken to implement the Convention. In turn, the Organization carries out inspections and implements programs of assistance and protection against chemical weapons, while also promoting the development of international cooperation in the field of chemical activities based on the exchange of scientific and technical information, chemicals and equipment for the production, processing, and use of chemicals for purposes not prohibited by the Convention. For more details on the problems and prospects of the CWC, see PIR Center’s research paper.

The problem of chemical weapons proliferation has become extremely acute in the context of the Syrian conflict that began in 2011. To prevent the proliferation of weapons of mass destruction (including chemical ones) and their falling into the hands of terrorists, the Russian delegation proposed to develop, within the framework of the Conference on Disarmament, a Convention on the Suppression of Acts of Chemical Terrorism. To get acquainted with the opinions of PIR Center’s foreign experts regarding the Russian initiative, please see the March and April 2016 issues of Yaderny Kontrol (in Russian).