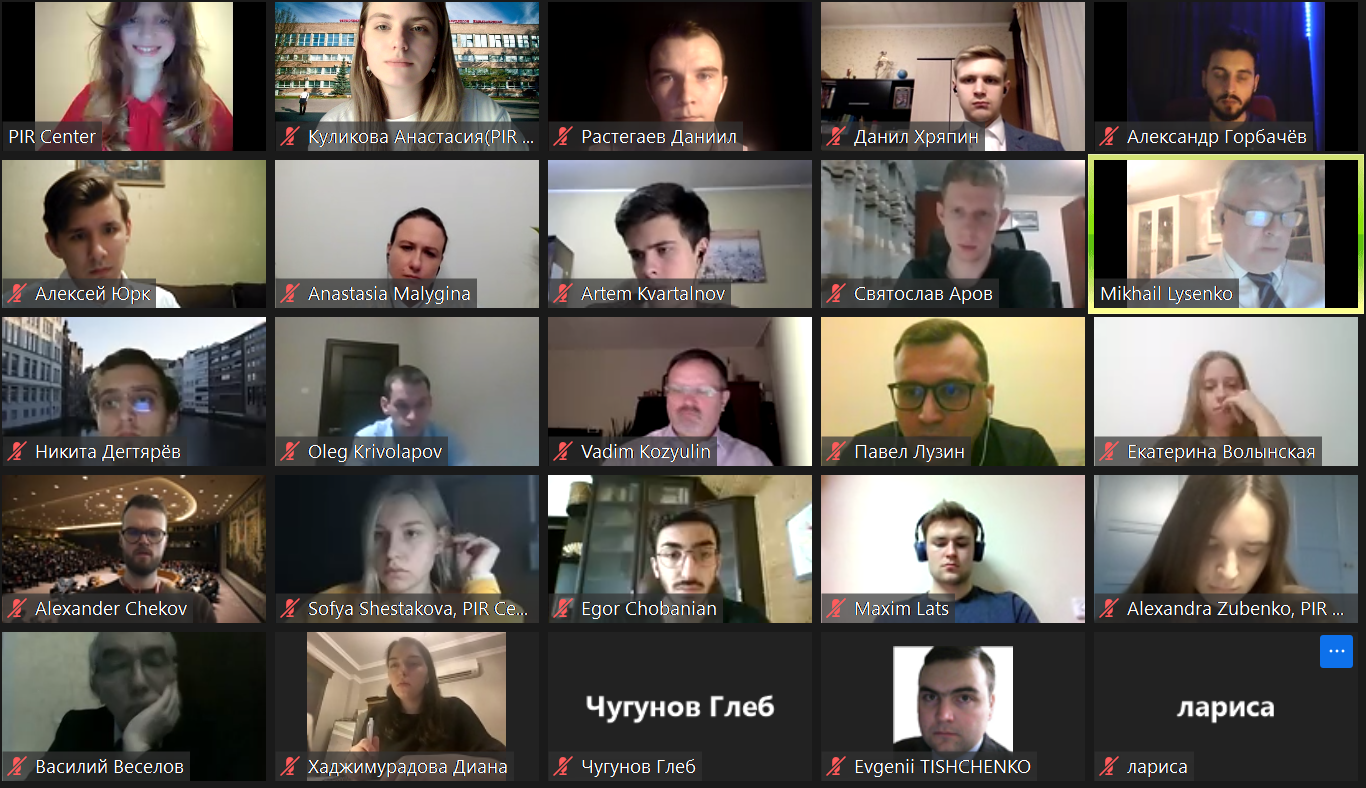 MOSCOW. FEBRUARY 25, 2022. PIR PRESS. “We are 60 years into the space age. Today satellites are the most important infrastructure for any state — from conventional communications satellites to ensure that the Internet works without disruption, to satellites to a missile warning system, on which the life of an entire planet depends. At the same time, the anti-satellite weapons that we are going to talk about today are a kind of new, unknown, and unpredictable virus for outer space. A virus, because it infects “healthy” satellites, presenting a threat to thousands of others. Unknown, because there are no meaningful instruments to define such weapons. Unpredictable, because there exist no barriers to its use. So far, not all countries have acquired ASAT weapons. Thus, we have a special challenge – to fight this virus, to make sure the use of ASAT weapons is strictly regulated or even banned,” — Daniil Rastegaev, PIR Center trainee, 1st year master’s degree student, School of World Politics, Lomonosov Moscow State University.

On February 17, PIR Center held a Midweek Brainstorming session on the topic «The Legal Regime of Anti-Satellite Weapons: On the Question of Russia’s Optimal Position». The research paper by Daniil Rastegaev, 1st-year master’s degree student, School of World Politics, Lomonosov Moscow State University, was presented following the results of his traineeship at PIR Center.

In his presentation, Daniil Rastegaev traced the history of the development of anti-satellite weapons (ASAT), described current ASAT arsenals of leading space nations, and scrutinized the existing ASAT legal regime. Also, he highlighted the main initiatives to establish a legal regime for ASAT put forward by Russia and other countries, analyzed possible types of ASAT legal regimes, and provided recommendations to Russia on how to build its position on a legal regime for space weapons.

The research paper was reviewed by Mikhail Lysenko, Member of PIR Center Advisory Board, Associate Professor of the International Law Department, Faculty Member of School of Government and International Affairs, MGIMO University. “The topic of the discussed scientific work (NR) is undoubtedly relevant. Should the United States place ASAT weapons in space, an arms race will ensue in a domino effect, engulfing the last “unweaponized” sphere of international relations. Can such a scenario be prevented or mitigated? In this research paper, a serious attempt has been made to answer this important question. As the discussion showed, the presented work is professionally inspiring, well-reasoned, with an original methodology. It is gratifying to see that the research community studying such a complex and knowledge-specific topic is being joined by young and creative specialists,” stressed Mikhail Lysenko.

The theme of this week’s Brainstorming Session aroused large interest among the audience. Following the defense of the research work, a constructive and fruitful discussion took place on the stated issues. The event was attended by experienced as well as younger-generation professionals in global security. This, after all, is the goal of PIR Center Midweek Brainstorming Sessions –to bridge the epistemic communities of experienced international relations experts and the younger generation of researchers.

Participants of the Midweek Brainstorming Session shared their impressions.

“It is necessary to discuss the optimal position in the field of preventing an arms race in outer space since Russian diplomacy is currently facing several new challenges. In his work, Daniil Olegovich presents his own view on the topic; the work is quite voluminous, covering many aspects. A fresh “student” view is undoubtedly important with its contribution to the discussion about the role of anti-satellite weapons in the negotiations held by leading space powers,” Vasily Veselov, Ph.D., Deputy Head of the Department of International Security, Faculty of World Politics, Lomonosov Moscow State University.

“PIR Center is famous for publishing reports that provide food for thought not only for the expert community but also for government professionals. Daniil Olegovich’s report can become a significant event provided that the author considers the recommendations of senior colleagues and can systematically present the existing approaches to solving the ASAT problem, or even offer his own innovative ideas,” Vadim Kozyulin, PIR Center Consultant, Head of the Center for Global Studies and International Organizations of the Institute for Contemporary International Studies of the Diplomatic Academy of the Ministry of Foreign Affairs of the Russian Federation.

“In 2021, Russia’s testing of anti-satellite weapons once again brought up the topic as part of the arms control agenda. In this regard, the large-scale work of Daniil Olegovich and the thoughtful discussion of this topic can help to recall the history of the issue as well as Russia’s recent proposals on the subject. This research paper should help to understand the real prospects of developing confidence building measures by the countries concerned, even if concluding an agreement on regulating or prohibiting ASAT weapons remains a longer-term goal,” Oleg Krivolapov, Senior Research Fellow, Institute for the U.S. and Canadian Studies, Russian Academy of Sciences.

“What struck me about the past Midweek Brainstorming Session was its atmosphere. The author not only possessed deep knowledge of the material but also showed genuine interest in ASAT issues in general. A mathematical formula was presented to calculate the most favorable position of Russia on the ASAT issue. The fact that these seminars are attended by respected subject matter experts and practitioners, as well as young researchers, makes any Midweek Brainstorming Session a unique event for the entire non-proliferation and disarmament community. There are two reasons why this is of great importance. First, the younger generation of researchers has a unique chance to learn directly from those who make history. And secondly, the experts on nonproliferation, disarmament, and global security share their experience and knowledge so that their work can be continued. Many thanks to PIR Center for this opportunity”, Sofia Shestakova, Russia and Nuclear Non-Proliferation Program Intern, PIR Center.

The recording of the event can be viewed via the attached link (in Russian).