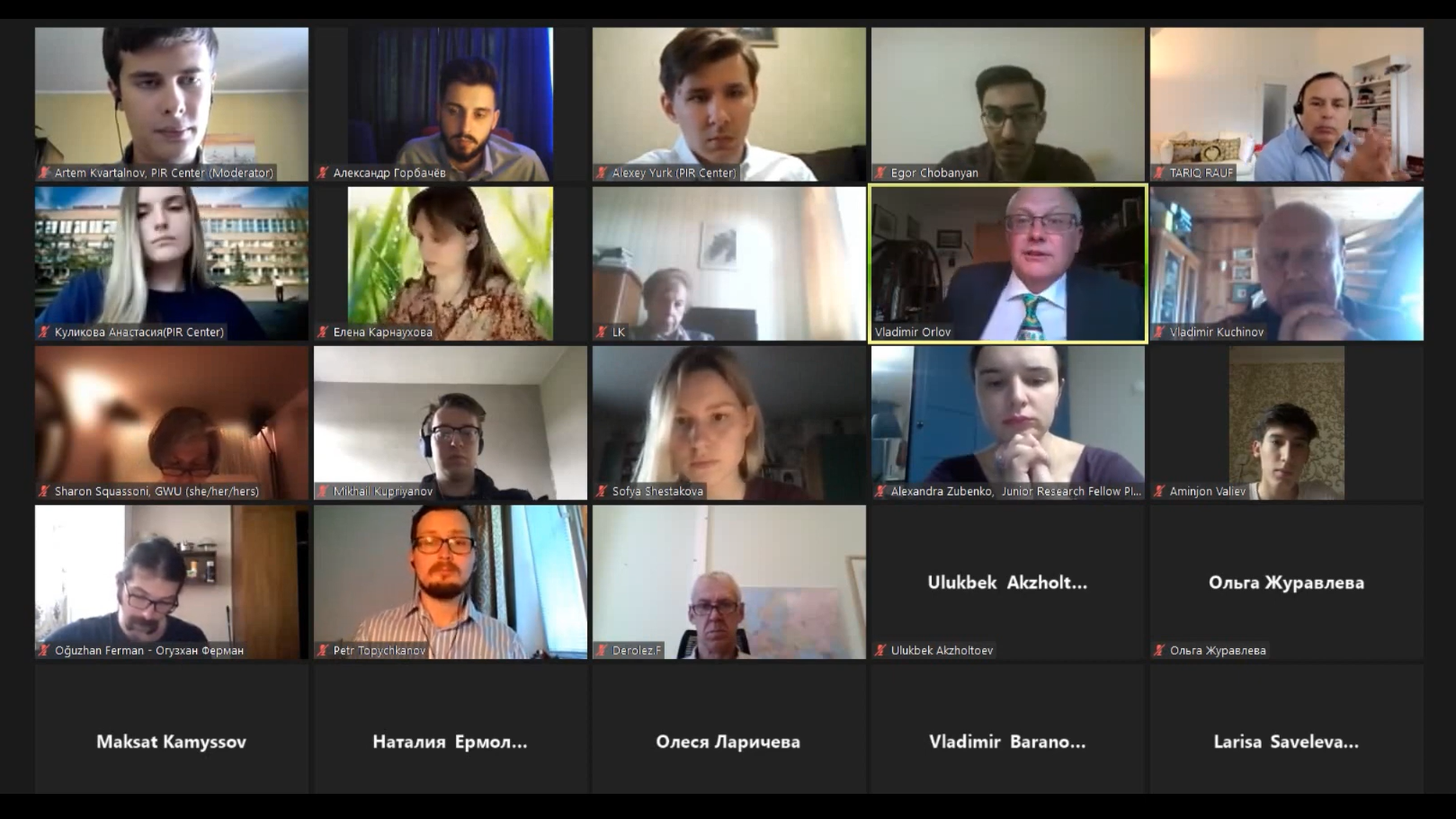 MOSCOW. JULY 13, 2022. PIR PRESS. “Ordinary Europeans feel very vulnerable today, they definitely haven’t felt so vulnerable for the last 30 years, and the current situation very clearly reminds many of us about the nuclear dangers of the early 1980s,” Vladimir Orlov, Founder & Director of PIR Center.

The research track of PIR Center’s work was enriched with another seminar: the Midweek Brainstorming Session “Strategic (In)stability in Europe and Asia: Pathways Towards Risk Reduction and De-escalation”. The welcoming speech was given by Vladimir Orlov, PIR Center’s Founder & Director. In his remarks, Dr. Orlov addressed ten ideas aiming to minimize nuclear risks globally and regionally.

Artem Kvartalnov, Junior Research Fellow at PIR Center, summarized and shared with experts and guests the results of the previously held Russian-American Track II dialogue closed to the public:

“As for the risk of nuclear conflict, participants in the discussion spoke very cautiously. On the one hand, some experts attempted to alleviate the general feeling of anxiety. It was pointed out that conflicts between nuclear states and non-nuclear neighbors had already occurred. One of the examples is the war between China and Vietnam in 1979. It was emphasized that the concept of “escalation for de-escalation” did not come true, whereas theoretical discussions of the risk of nuclear war separated from specific scenarios are counterproductive. On the other hand, several participants noted that in the post-February 2022 reality, “the impossible has become possible,” while a total absence of trust increases the likelihood of incidents that may induce escalation.

Many experts questioned the possibility of restoring the Russian-American Strategic Stability Dialogue. However, a growing potential for the use of multilateral formats was noted, which is especially important in the context of an impasse in bilateral relations.”

Such experts as Tariq Rauf, Petr Topychkanov, Sharon Squassoni, and Vladimir Baranovsky made their presentations and comments. Other Russian and foreign experts, as well as students and PIR Center’s staff and interns, were part of the event.

The following topics were in the spotlight: the role of nuclear weapons and the risks of their use in Europe and beyond; historical experience; the impact of the Russian-Ukrainian crisis on other regions of the world. The phenomenon of degradation of strategic stability was touched upon, and priority opportunities for reducing nuclear risks were announced. Degradation of strategic stability was noted, and priority scenarios for reducing nuclear risks were summarized.

Tariq Rauf, Member of PIR Center’s Advisory Board and former Head of verification and security policy coordination at the IAEA, comprehensively commented on the impact of Russian-U.S. confrontation on the state of the NPT Review Process:

“Starting from 2018, the atmosphere and discourse between the two largest possessors of nuclear weapons started to deteriorate in the NPT Review Conference context because until the PrepCom in Geneva in 2018 whatever the problems might have been between Russia and other states they did not bring those problems to the NPT, they were more or less on the same page, which is to prevent the proliferation of nuclear weapons, to strengthen IAEA safeguards, nuclear safety and security. But starting in 2018 the atmosphere started to deteriorate, they started fighting with each other at the PrepCom, and this discourse became even fiercer in the 2019 PrepCom in New York, which was then exacerbated by Russian complaints that Russian delegates did not get visas to New York in time or got the visas very late.

Between PrepCom April-May 2019 and August 2022 the relationship between the two sides has been very close to being fractured. I’ve taken part in a number of meetings in person and online where there have been senior former US officials, as well as some who would be at the Review Conference, and the US position, as I understand it, is that there can be no discussion or negotiation with Russia until the conflict in Ukraine is stopped and the status quo ante is restored of 23 February 2022. There will be no discussions on New START or any other issue. So, in that sense, I’m quite concerned.”

Sharon Squassoni, Research Professor at George Washington University and Member of PIR Center’s Advisory Board, also shared her perspective. “One thing I think is new is that I am not sure the U.S. really knows what Russia’s objectives in Ukraine are. There is a lot of guesswork, and there are a lot of right-wing former generals saying a lot of crazy things [, but nothing more]. Another thing that is new is misinformation and disinformation in this crisis.

The U.S. wasn’t deterred [by Russia in this conflict]. Other people look at the kinds of assistance we [the U.S.] have given and say that if Russia did not have nuclear weapons, we would certainly put a no-fly zone in there. There are a lot of different views on this. I would contend, that not only do we not want a nuclear war with Russia, but we also don’t want a conventional war with Russia. That is not in our interest, it is not in anyone’s interest.”

The participants agreed that de-escalation in Ukraine is not yet in sight, although the risk of nuclear use is close to zero.

Watch the recording of the event.