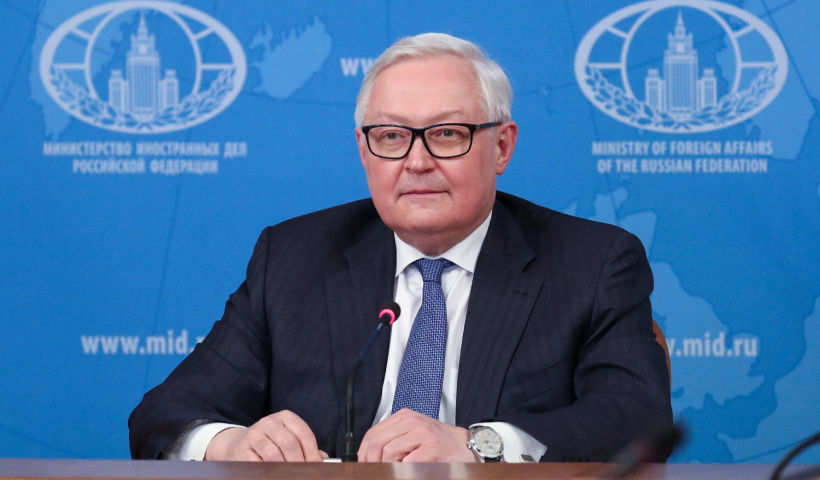 Main PIR Press News Thesis of H.E. Sergey A. Ryabkov for the conference “On the 60th Anniversary of the Cuban Missile Crisis”

Thesis of H.E. Sergey A. Ryabkov for the conference “On the 60th Anniversary of the Cuban Missile Crisis”

H.E. Sergey A. Ryabkov, Deputy Foreign Minister of the Russian Federation, for the International Scientific Conference “On the 60th Anniversary of the Cuban Missile Crisis”

The approaching 60th anniversary of the Cuban Missile Crisis, when the Soviet Union and the United States were on the verge of disaster, has a direct correlation with what is happening today in the context of a tough confrontation around Ukraine, where the collective West has virtually unleashed a proxy war against our country.

At that time the leaders of the two nuclear powers had enough wisdom to move away from the edge of the abyss by developing a geopolitical compromise, which despite being perceived ambiguously both in the USSR and especially in the US, allowed to avoid a nuclear apocalypse. Washington guaranteed non-aggression against Cuba and the withdrawal of the US missiles from Turkey, while Moscow removed the Soviet intermediate-range ballistic missile (RSD missiles) transported earlier to the “Island of Freedom”.

The current situation is fundamentally different. The US is in fact incapable of reaching agreement and, together with the UK and a number of other NATO states, is directly pushing Kiev to expand its’ military actions to our territory, intending to continue them “to the last Ukrainian” in order to inflict a “strategic defeat” on Russia.

This time they didn’t even hesitate to use nuclear blackmail. We are witnessing the unthinkable, – modern US systems are used for regular shelling of Zaporozhskaya NPP, and some high-ranking officials of the leading NATO states have started talking about a possible nuclear conflict.

I am not going to delve into the history of the Cuban Missile Crisis, professional experts participating in the conference will do it better than me. I will only say that the traditional arms control system has almost been destroyed by the Americans. President Biden’s administration only agreed to extend the New START for five years, but eventually stopped there.

There was, of course, hope for more when a full-fledged summit between Russia and the United States took place in Geneva, where the presidents reaffirmed the formula that “a nuclear war cannot be won and must never be fought”. Six months later, this postulate was reproduced by the entire “nuclear five” in a joint statement of the leaders.

Besides, at the Geneva summit bilateral consultations on strategic stability were given a new impulse. After several rounds, however, the Americans suspended them, turning blind eye to our ideas on a “new security equation”, and then rejecting the Russian initiative on legally binding security guarantees, which included non-expansion of NATO, non-deployment of strike weapons systems near the Russian borders and the return of the alliance’s military posture to situation as of 1997.

We also see that in parallel Pentagon is implementing a destabilizing program to modernize its nuclear potential. Among other things, this is about development, arming and deployment in Europe of the high-precision B61-12 thermonuclear aerial bomb with variable yield, which in theory is designed to reduce side effects of its use. In addition, Trident-II SLBMs with low-yield warheads, which are supposed to be used in certain scenarios of a limited use of nuclear weapons, have been put on combat duty. Thus, the Americans deliberately decrease the “nuclear threshold”, which creates an additional threat to our national security.

We noticed Washington’s painful reaction to President Putin’s order to put the Russian deterrent forces on a special alert regime. We explain that we do not threaten anyone with nuclear weapons – the criteria for its use are set forth in the Military Doctrine and specified in the Basic Guidelines of Russia’s Nuclear Deterrence State Policy of June 2, 2020. At the same time, we warn of the risks that carries Western intervention in a special military operation in Ukraine and urge the US Administration to avoid a situation that could lead to a direct military clash with Russia.

Our country has been declared as the main military threat to the United States by Washington as at the doctrinal level. At the same time, the current Nuclear Posture Review (a brief Pentagon reference on Nuclear Posture Review dated March 28, 2022) stipulates, inter alia, that “the United States would only consider the employment of nuclear weapons in extreme circumstances to defend the vital interests of the United States or its allies and partners”.  To put it bluntly, “vital interests” is a stretchable concept, and anyone can be put into category of “allies and partners”.

An open confrontation with the United States and NATO, fraught with a direct military clash, is not in our interests. We hope that President Biden’s Administration is also aware of the danger of an uncontrolled escalation of the conflict in Ukraine, given the repeated statements by the officials that they will not send the US military there.

In our contacts with the Americans, we remind them of a well–forgotten principle that worked in the Cold War, namely peaceful coexistence, despite all the differences and fundamental contradictions. We consider it to be unacceptable when they impose the notorious “rules-based order”, coupled with “progressive” norms that negate all traditional moral standards and ethics. But, unfortunately, we have repeatedly faced a blank wall of denial.

It is no secret that Russian-US relations are in an extremely deplorable state, at a near-zero level comparable to the worst moments of the Cold War. The confrontational course pursued by Washington within the strategy of dual deterrence of Moscow and Beijing, as well of those who question American hegemony, is becoming increasingly tough and assertive. The goal is obvious – to try to hold on their liberal-globalist positions, preventing the emergence of new centers of power in the actively developing multipolar world order.

Washington’s current line of involving all available means of pressure, be it economic, military-political, scientific-technological, propaganda or other in its’ fight against the “Russian threat”, has been and will remain a constant of the US foreign policy. We are determined to continue to take adequate responsive measures, including those of an asymmetric character.

In conclusion, let me emphasize that the solution of the Cuban Missile Crisis is an example of how it is possible and necessary to look for ways ahead even in the most difficult, if not hopeless, situations provided there is political will, which currently is in acute deficit in the West. The problem, however, is that for a long time in the US there have been no politicians of John F. Kennedy’s stature and probably there won’t be any in the foreseeable future.

But they will have to negotiate. The more resolutely we act in Ukraine, the more untenable the American claims to preserve its hegemony and the former unipolar world are becoming, and the faster the United States will be forced to recognize Russia’s legitimate, vital interests.