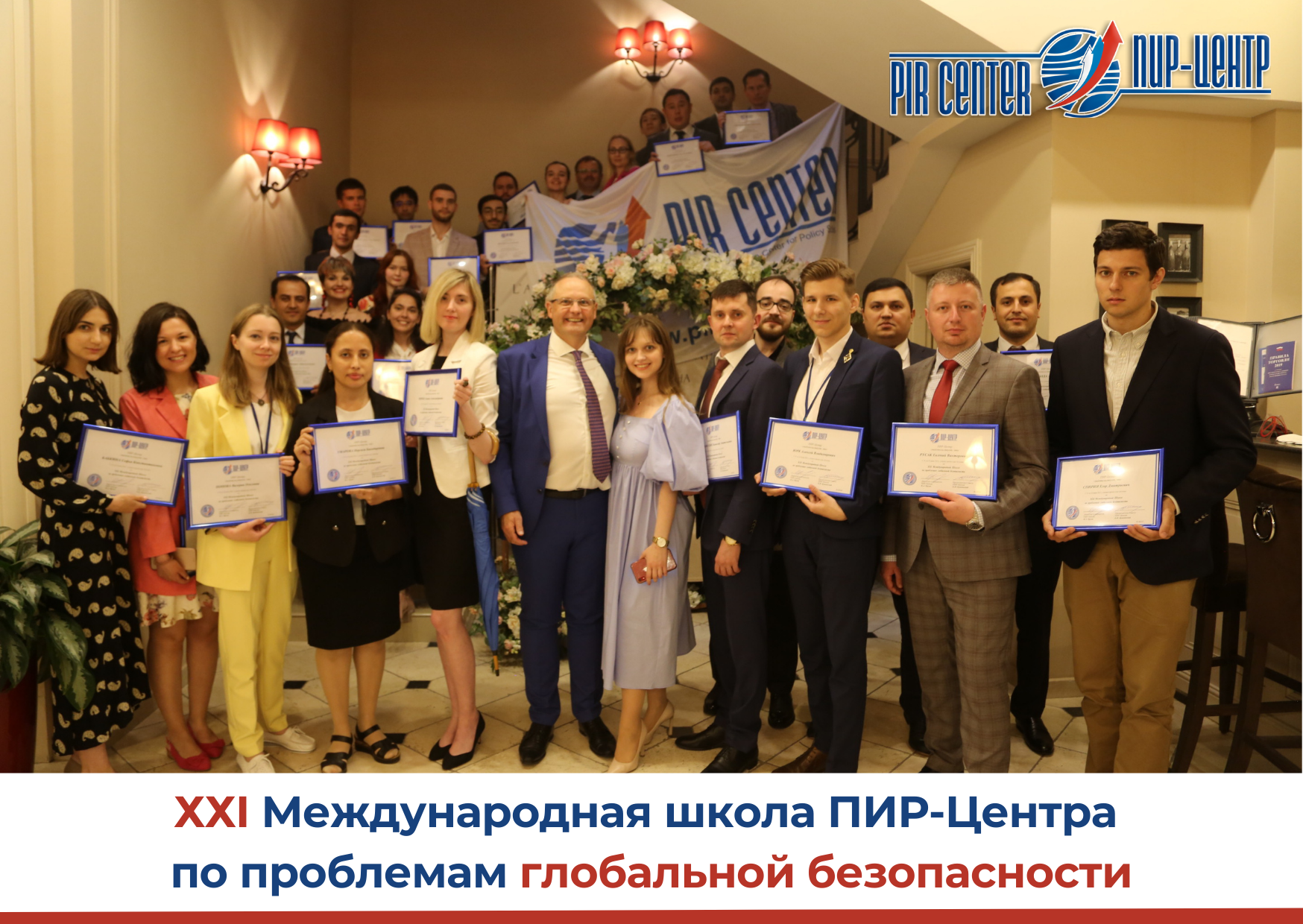 ZVENIGOROD. JULY 5, 2022. “The International School on Global Security is very different from ordinary conferences – a wider scope of topics, a wonderful selection of interesting speakers. The cast of lecturers was simply brilliant. Thanks to the School for the opportunity to communicate with colleagues, I am completely delighted with the composition of the students! I am all positive about the results of my participation in the School. My activity is now connected with the military sphere, and in the future I intend to defend Russia’s interests in the field of international military cooperation. Undoubtedly, the skills acquired at the PIR Center School will be very useful to me in this. Let the nuclear umbrella reliably protect the PIR Alumni Community from all the international storms”, – Alisa Chirko, winner of the XXI International School on Global Security, Editor of the Art Department of the RIA “Army of Russia” of the Ministry of Defense of the Russian Federation.

On June 18-26, 2022, PIR Center held XXI International School on Global Security. The School was held in Zvenigorod, Moscow region, a town rich in unique monuments of the Russian spiritual culture and military glory. XXI International School on Global Security was organized in partnership with MGIMO University as a part of the implementation of the joint project “Global Security, Strategic Stability and Arms Control” (implemented by PIR Center and MGIMO within Strategic Academic Leadership Program “Priority 2030”), as well as with grant support from the Presidential Grants Fund, Alexander Gorchakov Public Diplomacy Fund and Russkiy Mir Foundation.

As part of the School, participants studied key issues of global security: functioning of the WMD nonproliferation regime, the development of arms control regime, international cooperation in the field of peaceful atom and the situation on the international uranium market, issues of cyber and information security, phenomenon of hybrid wars, the impact of new technologies on Eurasian security, transnational security threats in Eurasia, a new European security agenda, relations between Russia and NATO, and much more.

participation of Professor of the Faculty of Communications, Media and Design of the Department of Integrated Communications of the Higher School of Economics Dmitry Evstafiev and a member of the Council on Foreign and Defence Policy (SVOP), Russian International Affairs Council (RIAC) and PIR Center Advisory Board, Director of the Carnegie Moscow Center (2008-2022) Dmitry Trenin at topic “Eurasia in the context of infogenic threats and hybrid wars: where are global transformations leading us?”. Also, on the first day of the School, the participants, together with Vadim Kozyulin, Head of the Center for Global Studies & International Organizations of the Institute for Contemporary International Studies of the Diplomatic Academy of the Ministry of Foreign Affairs of the Russian Federation, discussed new war technologies and their impact on security in Eurasia. The first day of the School ended with an active discussion on the crisis in European security and the prospects for developing Russia – NATO relations with the participation of Andrey Kortunov, Director General of the Russian International Affairs Council, a member of PIR Center Advisory Board.

As part of the School, participants took part in classes on modern armed conflicts and regional aspects of security in Eurasia. Vitaly Naumkin, Academic Advisor of the Institute of Oriental Studies under the Russian Academy of Sciences, member of PIR Center Advisory Board, gave a lecture on the risks and opportunities of regional transformation in the Middle East. Ivan Safranchuk, Director of the Center of Euro-Asian Studies of the Institute for International Studies of MGIMO University, Member of PIR Center Advisory Board discussed with participants the security situation in Central Asia. The classes of Ekaterina Stepanova, Head of the Group on Peace and Conflict Studies of IMEMO RAS, member of PIR Center Executive Board, provided the participants with opportunity to consider modern armed conflicts, main trends in peace processes and armed violence.

Within the framework of a special module, participants of the School discussed burning issues of the development of nuclear nonproliferation regime, the risks of a potential expansion of the nuclear club, the prospects for use of peaceful nuclear energy, as well as the rules of the game in the uranium market. The lecturers of this module were Director and Founder of PIR Center Vladimir Orlov, member of PIR Center Advisory Board Alexey Ubeev, General Director of JSC “International Uranium Enrichment Center” Gleb Efremov, Associated Professor of the Department of International Relations of Institute of International Relations of National Research Nuclear University MEPhI Vladimir Kuchinov. PIR Center also submited a report “A New Nuclear Nine? Assessing the threats of nuclear proliferation in the world”, which considers Brazil, Egypt, Iran, Japan, Saudi Arabia, South Korea, Taiwan, Turkey, and Ukraine  as potential new nuclear states. For the first time, a class on the issues of the militarization of outer space was held at the School – Mikhail Lysenko, Deputy Head of the Department of International Law at MGIMO University, a member of PIR Center Advisory Board, discussed with participants the students of the School the intersection points of space and nuclear law.

By tradition, participants considered a block of questions on weapons of mass destruction and strategic weapons. Vladimir Ladanov, Head of the South Pacific Section, Third Department of the Russian Foreign Ministry, gave a lecture on the topic “The factor of chemical and biological weapons in world politics: the history of creation, use and prohibition”. PIR Center Executive Board Chairman, Co-Chair of the Trialogue Club International Evgeny Buzhinskiy discussed with the students of the School new types of strategic weapons and their impact on strategic stability, as well as prospects for the development of the arms control regime.

Within the framework of the School, the IV International Timerbaev Debates on the topic “Will the world be safer without nuclear weapons?” was held with the participation of Vladimir Kuchinov as an expert.

Regarding digital transformation, cyber and information security, special correspondent of the Kommersant Publishing House, member of PIR Cener Executive Board Elena Chernenko and participants of the School touched upon the problem of responsible behavior in cyberspace, as well as the prospects for the development of international information security norms. For the first time, a situational analysis was held on the sidelines of the School on the topic “Crisis cyber diplomacy: how to avoid conflict between states after hacker attacks?”: Oleg Shakirov, PIR Center Consultant, together with the participants of the School, simulated the resolution of a cyber conflict between Slovenia and Pakistan.

Special attention was paid to Russian foreign policy priorities. On the sidelines of the School there was a discussion “Empire-Russia in 300 years. Where are we going to and what are we bringing to the world?” Vladimir Rudakov, editor-in-chief of the popular historical journal “Istorik”, Natalia Burlinova, president of the Center for Support and Development of Public Initiatives “Creative Diplomacy”, and Head of the Department of European Security Problems of INION RAS, Deputy Dean for Research of the School of World Politics, Lomonosov Moscow State University Anastasia Ponamareva took part as panelist of this discussion.

The Deputy Foreign Minister of Russia H.E. Sergey Ryabkov also met with the participants of the School. The meeting was devoted to the topic “Balance of values and interests: Russia’s priorities in the field of foreign policy at the present stage”, during which H.E. Sergey Ryabkov openly and confidentially discussed with the participants of the School the development of international relations and Russian approaches to the international situation at present times.

The lecture by the President of the Global Energy Association, journalist and TV presenter Sergey Brilev, devoted to the problems of different understanding of energy in Russia and the European Union, was also met by participants with the great interest.

In the closing days of the School, under the leadership of Dmitry Polikanov, Deputy Head of Rossotrudnichestvo, the School participants took part in a strategic foresight session on the topic “The future of our common and indivisible security: how to build peace in Eurasia without wars and conflicts?”. Under the guidance of mentors, they divided into working groups and developed projects to ensure security in Eurasia.

The working groups were chaired by PIR Center Consultant, Head of the Center for Global Studies & International Organizations of the Institute for Contemporary International Studies of the Diplomatic Academy of the Ministry of Foreign Affairs of the Russian FederationVadim Kozyulin, member of PIR Center Executive Board, Head of the Department for Expert and Analytical Work, Monitoring the Implementation of Priority Decisions and National Projects of the ONF Lyubov Soldatkina, Member of PIR Alumni Community, Evocargo international project manager Yulia Tseshkovskaya, and PIR Center Consultant Oleg Shakirov.

Alisa Chirko, Editor of the Art Department of the RIA “Army of Russia” of the Ministry of Defense of the Russian Federation, scored the highest number of points at the end of the School. The top five of the School also included the Head of the Department of Verification of the Department of International Military Cooperation of the Ministry of Defense of the Republic of Belarus Yevgeny Rusak, a PhD Student of the School of International Relations of St. Petersburg State University Aleksey Yurk, the Chief Adviser at Belarusian Institute for Strategic Studies Vitaly Romanovsky and an Expert of the Center for Advanced American Studies of the Institute for International Studies of MGIMO University Egor Spirin.

Intensive classes at the School were balanced by a rich cultural program. Students of the School visited a unique monument of Russian spiritual culture – the Savvino-Storozhevsky Monastery. In addition, there was an excursion to the Patriot Park, where the School participants visited the Main Cathedral of the Russian Armed Forces and the Memory Lane Museum Complex. The participants of the School got also acquainted with the exposition of the Central Museum of the Victory in the Great Patriotic War 1941-1945 called “The feat of the people”. On June 22, a joint laying of flowers at the Glory Memorial in Zvenigorod took place: the School participants honored the memory of the heroes of the Great Patriotic War – Zvenigorod residents, who defended the western borders of the Soviet Union from the onslaught of Nazi invaders.

The school ended with a solemn reception and a traditional meeting of PIR Alumni Community Members, which was held in the “MASLIN-FEST” format for the first time. With poems, songs and dances, the meeting participants remembered our teacher, mentor and senior comrade Evgeny Maslin, who left us on February 26, 2022.

Detailed information about the School, students and lecturers can be found here.