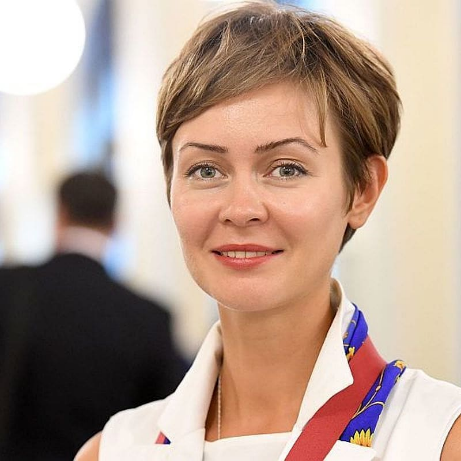 Born in Ramenskoye, Moscow Region. Graduate in International Relations (Bachelor’s degree, 2004) and Master’s degree in Regional Studies (Master’s degree, 2006) at MGIMO University. Graduated from the HSE and defended in 2010 from the Institute of Europe of the RAS on the topic “NATO in Afghanistan (2003 – 2009): problems of design and implementation of political strategy”. Holds a PhD in Political Science. Fluent in English and Spanish. Began her career in 2006 at Rosoboronexport, then worked for two years in the international programs department of RIA Novosti (2008-2010), including the Washington bureau, where she was the author and presenter of a series of news programs on Russia on The Washington Post Radio. While at RIA Novosti, she was engaged in the implementation of major expert, political science and information projects on the image of the state (Valdai Discussion Club 2007-2008). After leaving RIA, she joined the staff of the Historical Perspective Foundation headed by historian Natalia Narochnitskaya, where she combined expert activities with the position of communications representative (2008-2011). From 2011 to 2014 was Director of programmes of the Gorchakov Foundation for the Support of Public Diplomacy. Within the organisation, responsible for setting up all public diplomacy and “soft power” programme activities. She devised and implemented projects in the field of information support for the country’s foreign policy through public diplomacy with the participation of leading Russian speakers and actors in this field. In 2014-2015 was Head of Department, Deputy Head of Information and Publicity of the Department of Public Relations of MGIMO (U) of the Ministry of Foreign Affairs of Russia. In 2014 – 2015, worked as Advisor to the External Relations Group under the Chairman of the Supervisory Board of Domodedovo Airport, in charge of GR. Since 2010 up to now has been the head of the Centre for Support and Development of Public Initiatives – Creative Diplomacy NGO. An expert in public diplomacy and a guest lecturer. Author of a manual on public diplomacy. For more than three years (2009 – 2011) was a producer and presenter of analytical programmes on domestic and foreign policy on the radio station «Moskva Govorit”. In 2018 – 2019 was author and presenter of the programme Meeting Russia. Was a member of the organizing group of the first Valdai Conferences (2007-2008) with the participation of the country’s leadership. Over the years of her work at the Gorchakov Foundation and Creative Diplomacy, has managed to develop and implement dozens of notable public diplomacy events involving Russian politicians, diplomats and the international expert community. 10/22