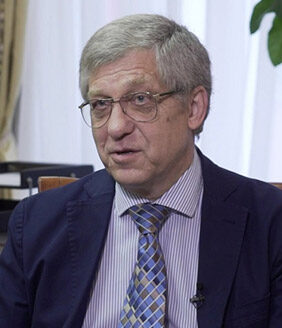 City:
Moscow
Affiliation:
The Department of Foreign Economic and International Relations of the City of Moscow
Position:
Deputy Head

PhD in history. State Councillor of Russian Federation, 3rd class. In 1980, graduated from the Moscow State Institute of International Relations (MGIMO). In 1985, defended his PhD thesis on the topic “Social practices in the activities of the impact of US diplomacy”. 1981-1996 — served at the Central Office of the Ministry of Foreign Affairs and on missions abroad. 1996-1998 — worked in the Presidential Administration, the last position held — Assistant Secretary on Foreign Affairs of the Russian Security Council. 1979-1981 — fellow of The Center for International Studies at MGIMO. 1998-1999 — Deputy Director of the Center for Russia’s national security at the Moscow State University. Since 1999 works at the Moscow government. 2000-2013 — Deputy Head of Department of International Relations of Moscow, Deputy Head of the Department for External Economies and International Relations of Moscow. Since 2013 — Advisor to the Mayor of Moscow. In 2013, became a director of the Moscow Compatriot House. Author of several papers on theory and history of international relations. Author of the Encyclopedia of protocol and etiquette. Research interests: the settlement of conflicts and crises; Russian national security; theory and practice of foreign policy and diplomacy. Member of the Advisory Board of the PIR Center since 2000. Advisor to the Mayor of Moscow; director of the Moscow House of Compatriots. 10/22