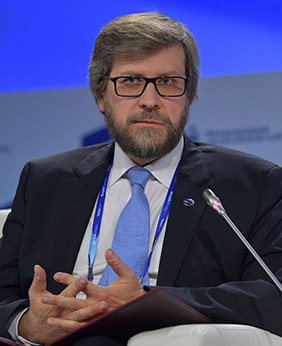 Chairman of the Presidium of Council on Foreign and Defense Policy, member of Presidential Council on Human Rights and Civic Society Institutions. Worked as a correspondent, commentator and editor for numerous Russian printed and electronic media, he is an international columnist with the Vedomosti and Kommersant daily, and Gazeta.ru online source; leading national radio stations and TV channels. His monthly “Policy line” column appears in The Moscow Times and “Geopolitics” column in Russian edition of Forbes magazine. As commentator of Russian foreign policy he is widely contributing to the most influential media in the U.S., Europe and China. Graduated from Moscow State University 1991 and holds a degree in Germanic Languages. PIR Center Advisory Board member since 2010.