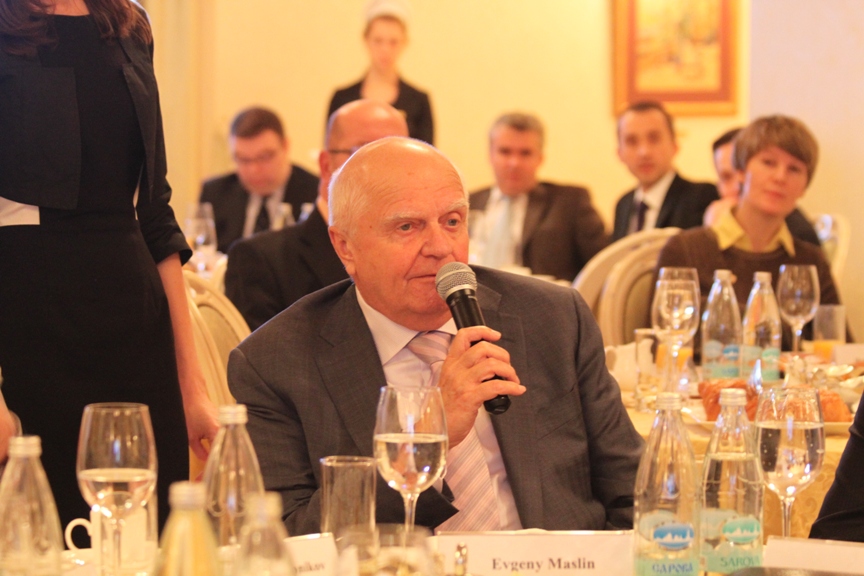 Main NONPROLIFERATION.WORLD “So it was” (HIS) Evgeny Maslin: memory gallery Evgeny Maslin’s biography and main publications

Colonel General (Ret.), one of the founders of Russia’s programs for international cooperation in the dismantlement of surplus armaments, an accomplishment recognized by the award of several government honors, including the Order of the Red Star, Order for Service to the Fatherland, and many medals. A leading expert on nuclear security, nuclear weapons reductions, and verification mechanisms. Laureate of the Russian State Prize. Worked in USSR and Russian Ministry of Defense organizations for more than 40 years, including from 1992-1997 as head of the Russian Ministry of Defense 12th Main Directorate, which is responsible for the security of nuclear munitions. Author of many publications in Russian and English, including articles on nuclear security, the Cooperative Threat Reduction program, and nuclear nonproliferation. He was awarded the Order of Military Merit and the Order of Courage.

He was born on May 20, 1937, in the village of Novotomnikovo, Morshansky district, Tambov region. He graduated from an elementary four-grade school in Voronezh, a seven-year school, and a secondary school in 1954.

Evgeny Petrovich had served in the Soviet Army since 1954. Graduated from the Military Academy of Communications named after S. M. Budyonny (Leningrad) in 1959. Since 1959, he served in the units of the 12th Main Directorate of the USSR Ministry of Defense (responsible for the operation, storage, maintenance, transportation and disposal of nuclear ammunition): military engineer, head of the group, head of the department, since 1979 – chief engineer of the compound (Vologda region), since 1981 – commander of the compound (Vologda). Graduated from the Military Academy of the General Staff of the Armed Forces of the Russian Federation in 1993.

Since 1997, Evgeny Petrovich has retired. However, he continued to be active, was a major expert in the field of nuclear weapons safety and in matters of their safe disposal. Author of a large number of publications on these issues. Academician of the Russian Academy of Natural Sciences.

Evgeny Petrovich’s acquaintance with the PIR Center was curious — it was not Maslin who found PIR Center, but PIR Center in the person of the director, Vladimir Orlov, found Evgeny Petrovich: “I wasn’t going to work at all after a very hard service and just enjoyed the rest. He called me, and we walked around Petrovsky Park for a long time, in general, he charmed me. That’s how I ended up at PIR Center. General Maslin worked as a senior advisor to PIR Center, then as a PIR Center Executive Board member. He remained a member of the Board – the highest body of our organization – until the last day of his life.

In 2002, U.S. Senators Sam Nunn and Richard Lugar awarded him the Medal for Services in the field of WMD proliferation threat reduction and contribution to the development of the Joint Threat Reduction Program (Nunn-Lugar Program).

Thanks to his experience, Colonel General Maslin had always played an important role in improving the effectiveness of the physical protection of the nuclear arsenal of the Russian Federation. Evgeny Petrovich was also actively engaged in teaching, giving lectures and reports to students, young specialists, military and diplomats in Moscow, Geneva, Washington, etc.

In April of 2017, Evgeny Maslin gave a speech during the debates “Will the world be safer without nuclear weapons?”, which were part of the seventeenth International School on global security, organized by PIR Center. After having heard both debating sides, Colonel General Maslin shared his own view: “Will the world be more secure without nuclear weapons? First, we need to understand what is “safer”, and what is “world”. For example, in the case of the nuclear war, will the penguins in Antarctica suffer? Of course, they will. Therefore, if we think of the world in terms of the whole planet, then it is high time for humankind to stop threatening each other (with nuclear weapons as well) and start dealing with universal problems. However, in the current situation the world would not be any safer, this is my deepest conviction”.

Evgeny Maslin commented his speeches in the following way: “Whenever I give a presentation on some conferences, I always start with the following: “Dear Ladies and Gentlemen! I would like to say, that first of all am a practitioner. So, I apologize for the fact that my expressions or my views would be slightly different from the generally accepted in the scientific world. Because everything about the nuclear security I know not from the books, but from my own experience”. In his interaction with young specialists at the School Colonel General Maslin also drew on his rich practical experience, which is simply priceless for the new generation of experts.

Evgeny Maslin also participated in the round table “What kind of world does Russia need, and what kind of Russia does the world need?”. His views on the issue Colonel General Maslin expressed in the following way: “Patriotism — is not so much praising and admiration of one’s Motherland, but rather an aspiration to make it better, not so many right words and considerations, but rather right deeds. Right actions of everyone on one’s own place. To raise the children as decent people, give them education, prepare for the responsible life — that is patriotism”.

In an interview in 2014, “The meaning of life is to live” (in Russian) Evgeny Maslin told PIR Center about himself and his life, advised how a senior lieutenant should cope with the post of lieutenant colonel, shared how knowledge of Kipling and Yevtushenko helps in negotiations with the Americans and explained whether it is worth shooting down asteroids with nuclear charges.

The last text prepared by Evgeny Petrovich was an understanding of the Russian-American dialogue on nuclear nonproliferation, which he made at the request of PIR Center: “If young people on both sides of the Bering Strait are thinking about how we can straighten Russian-American relations, not everything is lost,” he writes. This text in Russian and English is being published today for the first time, and the book where it is published still smells of printing ink.

To preserve the memory of Evgeny Petrovich Maslin and to honor the talented statesman, PIR Center placed on its website a Colonel General Evgeny P. Maslin Memory Gallery.