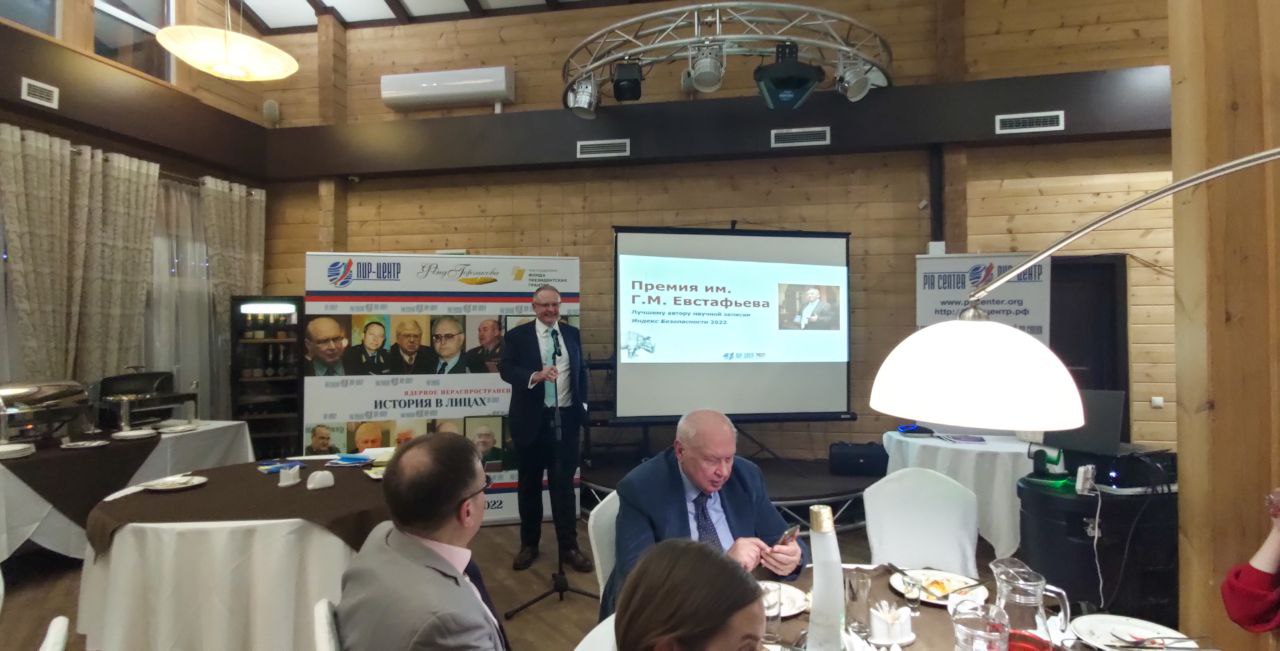 Main PIR Press News The award ceremony for the best author of the Evstafiev series 2022 was held in Vladimir, Russia

The award ceremony for the best author of the Evstafiev series 2022 was held in Vladimir, Russia

I would like to congratulate the PIR Center on holding the award named after my father, Gennady Evstafiev. It’s nice that such people are remembered, that their experience, knowledge, and ideas are transmitted. This is probably the best memory that can exist. And I am very grateful to the PIR Center for keeping the memory of Lieutenant General G. M. Evstafiev and multiplying it by working with young people 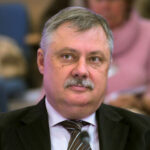 Dmitry Evstafiev
from the video message of Professor of the Faculty of Communications, Media and Design of the HSE, to the participants of the Evstafiev Award Contest 2022

On December 4, 2022, an award ceremony was held for the winner of the Evstafiev Award Contest for young IR specialists. The ceremony was held within the seminar of the project “Oral History of Nuclear Nonproliferation” on the basis of the Pearl of the Golden Ring Hotel in city of Vladimir, Russia.

The winner of the Competition for the Evstafiev Award Contest 2022 became Leonid Tsukanov – RIAC expert, permanent author of PIR Center, columnist of the Expert magazine, nominee of the Nasser Bin Hamad al-Khalifa International Prize in the field of youth creativity on the track science (Bahrain, 2021), participant of the II Russian-Egyptian Forum on cooperation in the field of artificial intelligence and cybersecurity (Egypt, 2021), graduate of the XX International School of PIR Center (2020). He also took advanced training courses on regional security in the Middle East (Tel-Aviv University) and cybersecurity (B.N. Yeltsin UrFU, Arab Academy for Science, Technology & Maritime Transport), as well as on terrorism research (Universiteit Leiden, Allameh Tabataba’i University).

The annual Evstafiev Award is given to young international students (postgraduates, undergraduates and bachelors) for the preparation of research papers (R&D) in the format of articles (reports, scientific notes) based on the results of actual scientific and practical research on global security issues. In 2021, we tested the competition: then the prize winner was Sergey Semenov, PIR Center Research Fellow, whose work received the highest praise.

The 2022 contest was attended by the works of young international experts published in the publications of the PIR Center Security Index and in the Security Index Occasional Paper Series within the Evstafiev series for the current (2022) year or submitted for publication as of November 15 of this year with the corresponding cover letter of the author. The amount of the award in 2022 was 300,000 Russian rubles.

On December 4, a meeting of the Commission of Evstafiev Award Contest took place. The Commission summed up the results of the competition and discussed the submitted works. The members of the Commission noted with satisfaction the high level of works of the Contest. By the decision of the majority of the Commission members, Leonid Tsukanov’s work “The Ups and Downs of the Cyber Caliphate: Al-Qaeda* and ISIS* in the Digital Space” was recognized as the best due to its scientific novelty, relevance, and strong methodological approach. The Contest Commission separately noted the works of Daniil Rastegaev, Anna Lashina and Edward Kendall.

The members of the Commission of Evstafiev Award Contest included:

4. Gen. Viktor I. Esin, Colonel-General (retired), Leading researcher at the Institute of the USA and Canada of the Russian Academy of Sciences, member of PIR Center Advisory Board

6. Albert F. Zulkharneev, Head of the Representative Office of Rossotrudnichestvo – Russian House in Bishkek, member of PIR Center Advisory Board

7. Dr. Vadim B. Kozyulin, Head of the Center for Global Studies and International Relations of the Diplomatic Academy of the Ministry of Foreign Affairs of the Russian Federation, PIR Center consultant

8. Gen. Vasily F. Lata, Lieutenant General (retired), Professor of the Department of Rocket Forces and Artillery of the Military Academy of the General Staff of the Armed Forces of the Russian Federation, PIR Center consultant.

10. Dr. Vladimir A. Orlov, Chairman of the Commission, Founder and Director of PIR Center, Professor of MGIMO.

The members of the Commission will also automatically join the Commission on the Scientific Heritage of Gennady M. Evstafiev, whose work is scheduled for the period from 2022 to 2028. Its purpose is to publish a collection of selected works of Gennady M. Evstafiev for his 90th anniversary – first of all, published in the PIR Center, but also a photo archive, other archival materials (to the extent that they are available to us), as well as the development of the Gallery of Gen. Gennady Evstafiev’s memory on the PIR Center website.

PIR Center congratulates Leonid Tsukanov, the winner of the Contest, and wishes him further success in his scientific research! Also, we would like to thank the members of the Commission who took part in the selection and discussion of the works, as well as the participants of the competition for high-quality and relevant research.

The Evstafiev Award Contest in 2022 was held within the project “Oral History of Nuclear Nonproliferation”, which is being implemented with the support of the Presidential Grants Foundation and the Alexander Gorchakov Public Diplomacy Fund.